According to some theories of art, for something to be a work of art it must have meaning. It must be about something and represent what it is about. Last month, on this blog, I argued that some culinary preparations are works of art when they perform this representational function, much to the consternation of some of my Facebook friends who are convinced that something as humble as food should never be associated with the pretensions of the art world. Yet, it is the very humbleness of food that, in part, qualifies it as art. Food can be about many things, but one thing it surely is about is the home. Some foods provoke our memories and imaginations as a representation of domestic life. We call such food “comfort food” because its filling, uncomplicated features haunt our consciousness with thoughts of security, calm, nourishment, and being cared for, especially when triggered by memories of the flavors of home. Exemplifications of the taste of home are only one way in which food serves this representational function but are nevertheless central to its significance.

What about wine? Can wine have meaning just as a work of art has meaning? Specifically, does wine evoke feelings of “homeyness”–security, nourishment and being cared for? For most Americans, probably not. Few Americans grow up with wine as a crucial component of their meals. But cultural norms are quite different in, for instance, France, where traditionally wine is served with most meals and children are occasionally encouraged to have a taste. However, most children (thankfully) do not really acquire a taste for it until later in life, so I doubt that it quite has the resonance that familiar foods have. Nevertheless, if we think of “home” more broadly, not as a domicile, but as the bit of geography that constitutes the center of one's world, where one's roots are planted and physical and psychological sustenance is gathered, wine can evoke “homeyness” at least in those parts of the world where generations have struggled to squeeze magic from grapes and where the notion of “terroir” is taken very seriously–France, Italy, and Germany, among many others. The U.S. is a relative newcomer to the vinous arts but even here many wine communities are beginning to develop self-conscious traditions based on the features of their soil and climate and their influence on flavor, the understanding of which is handed down through generations.

END_OF_DOCUMENT_TOKEN_TO_BE_REPLACED 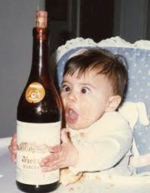 It's not like “reading tea leaves”. Fermented grape juice will not foretell the future. But wine does tell a story if you speak its language. Now, I'm not getting all mystical here by attributing linguistic ability to fermented grape juice. The story a wine tells is quite concrete and palpable like mud on the boots and mildew on leaves. The flavors and textures of wine are not merely sensations but qualities that say something about the land on which grapes are grown, the people who made the wine, the world they live in, and the person who is drinking it. Discovering these details gives a wine resonance and meaning that cannot be gained by mere consumption.

A wine has flavor because it is made from a specific grape, from a specific piece of land, and by a winemaker who intended the wine to taste as it does. The winemaking process and decision to plant those particular grapes is a centuries-long process of adapting grapes to climate, soil, and taste preferences. Thus, when you taste a wine you taste the residue of geography and culture. Taste opens up a world with a rich assortment of connections just like any good book.

Of course, anything we consume has a history and a process that produced it. And with sufficient knowledge of how it was produced, we might identify features of that process by attending to its flavor. But wine is unique because when you pay attention and understand why winemakers make the wine they do, the wine says something about them, their family, what they like to drink, and their motivations for making wine. A can of Coke tells you little of importance about the people who make it or the place it comes from. It can be made anywhere by anyone if the price is right. Not so with non-industrial wines. They are inherently artisanal products, and inherently a product of place, and they tell a very human story. Wine is one of the few products where geography, human culture, and aesthetics meet with such intensity, variability, and beauty. It is thus full of meaning waiting to be interpreted.

END_OF_DOCUMENT_TOKEN_TO_BE_REPLACED

In many traditional wine regions of the world wine, like food, has been a marker of identity. Wine, when properly made, expresses the character of the soil and climate in which grapes are grown, and the sensibilities of the people who make and consume it. Thus, it is a form of cultural expression that sets one culture or region off from another, drawing a contrast with the rest of the world and inducing a sense of local uniqueness and particularity. As a bulwark against the homogenization of wine produced by global corporations for a world market, the authenticity of a wine's expression thus becomes one criterion by which wine quality is assessed. Wine that does not taste of its origins is branded inauthentic.

But just as creative chefs are confronted with the problem of being innovative while maintaining links to traditions, winemakers are faced with a similar dilemma. Wine lovers are nothing if not diviners of secrets. We strain to find the hidden layer of spice that emerges only after an hour of decanting, alertly attend to the ephemeral floral notes from esters so volatile that a few seconds exposure to air whisks them away forever, and obsess over the hint of tobacco that begins to develop only after 10 years in the cellar. If a wine is to qualify as a work of art, it must repay such devoted attention, revealing new dimensions with repeated tastings, especially as it develops with age. It should be an expression of the vision of the winemaker or the terroir of the region in which the grapes were grown, and like great art, a great wine should be a bit of an enigma, yielding pleasure and understanding while leaving the impression that there is something more here to be grasped. But most importantly, a vinous work of art must be unique. Just as Van Gogh's rendering of Arles is great because no predecessor had been able to capture with paint what Van Gogh saw in an ordinary Cyprus tree, a work of vinous art will uncover new dimensions in flavor. But that seems to contradict the demand that wine reflect the traditional flavor profile characteristic of the region from which it comes. How does a winemaker achieve originality while remaining wedded to tradition?

END_OF_DOCUMENT_TOKEN_TO_BE_REPLACED

Few terms in the wine world are more controversial than “terroir”, the French word meaning “of the soil”. “Terroir” refers to the influence of soil and climate on the wine in your glass. But the meaning of “terroir” is not restricted to a technical discussion of soil structure or the influence of climate. Part of the romance of wine is that it (allegedly) expresses the particular character of a region and perhaps its people as well.

According to some “terroirists”, when we drink wine that expresses terroir, we feel connected to a particular plot of land and its unique characteristics, and by extension, its inhabitants, their struggles, achievements, and sensibility. Can't you just feel their spirit coursing through your veins on a wild alcohol ride? The most extreme terroirists claim that the influence of soil and climate can be quite literally tasted in the wine. If this strikes you as a bit of, well, the digested plant food of bovines to put it politely, you are not alone. Many in the wine business are skeptical about the existence of terroir claiming that winemakers should make the best wine they can without trying to preserve some mystical connection with the soil. But the issue is an important one because the reputation of entire wine regions rests on the alleged unique characteristics of their terroir, not to mention the fact that the skill and discernment of wine tasters often involves recognizing these characteristics.

There is confusion, however, regarding what this concept of terroir conveys. Some uses of the term simply imply that wine grapes are influenced by climate and soil so that wines from a region with broadly similar soil types and macroclimates have common characteristics discernable in the wine. This is obviously true and unobjectionable. Factors such as the ability of soil to drain or absorb water, the presence of stones that radiate heat into the vineyard, and the effects of nutrients on plant metabolism are among the important known effects of soil on vineyards. The soil and climate in Bordeaux differs from the soil and climate in Burgundy and thus they grow different grapes and make wines of quite contrasting styles that are apparent in the glass.