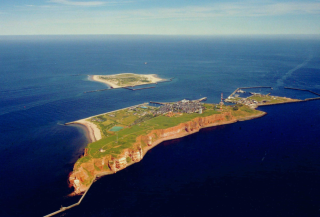 The sun was setting on a cloudless sky, the gulls screeching in the distance. The air was bracing and clear. Land rose from the blue ocean, a vague apparition on the horizon.

He breathed the elixir of pure evening air in and heaved a sigh of relief. This would help the godforsaken hay fever which had plagued him like a demon for the last four days. It had necessitated a trip away from the mainland to this tiny outcrop of flaming red rock out in the North Sea. Here he could be free not just of the hay fever but of his mentor, Niels Bohr. Perched on the rock, he looked out into the blue expanse.

For the last several months, Bohr had followed him like a shadow, an affliction that seemed almost as bad as the hay fever. It had all started about a year earlier, but really, it started when he was a child. His father, an erudite scholar but unsparing disciplinarian, made his brother and him compete mercilessly with each other. Even now he was not on the best terms with his brother, but the cutthroat competition produced at least one happy outcome: a passion for mathematics and physics that continued to provide him with intense pleasure.

He remembered those war torn years when Germany seemed to be on the brink of collapse, when one revolution after another threatened to tear apart the fabric of society. Physics was the one refuge. It sustained him then, and it promised to sustain him now.

If only he could understand what Bohr wanted. Bohr was not his first mentor. That place of pride belonged to Arnold Sommerfeld in Munich. Sommerfeld, the man with the impeccably waxed mustache who his friend Pauli called a Hussar officer. Sommerfeld, who would immerse his students not only in the latest physics but in his own home, where discussions went on late into the night. Discussions in which physics, politics and philosophy co-existed. His own father was often distant; Sommerfeld was the father figure in his life. It was also in Sommerfeld’s classes that he met his first real friend – Wolfgang Pauli. Pauli was still having trouble attending classes in the morning when there were all those clubs and parties to frequent at night. He always enjoyed long discussions with Pauli, the ones during which his friend often complimented him by telling him he was not completely stupid. It was Pauli who had steered him away from relativity and toward the most exciting new field in physics – quantum theory.