During high school, my friends and I used to drink at a local Irish bar. And when I say Irish bar, I don’t mean some contrived yuppie shit hole with an Irish name, a bunch of Gaelic tchochkes splattered across the wall, and overpriced pints of Guiness poured poorly. I mean a working class bar in the Kingsbridge section of The Bronx where Irish immigrants drank, mostly bottles of Bud emptied into small, stemmed glassware. Whatever’s cheap.

The place was called Harper’s. The clientele was mostly old men, with a cacophony of younger people occasionally crowding in on the weekends. Me and my friends started drinking there when we were 16. The legal age in New York was still 18, and neighborhood bars usually didn’t care so long as you were within a couple of years. I didn’t bother buying a fake ID until I went away to college in Michigan. At corner bars in The Bronx, no one even bothered to ask.

Harper’s was the kind of quiet hole in the wall where nothing was happening, but anything could happen and it wouldn’t surprise you. Like out of the blue one night, some guy setup a guitar and small PA, and started singing sad sap Irish folk songs like “I Wish I Was Back Home in Derry.” Harper’s never had live music, but suddenly there he was.

No one paid attention. He never came back.

At some point you were also sure to have someone come into the bar and try to sell you something. Maybe a woman hawking black market movies on VHS, or a huckster pretending to be deaf and mute, collecting money for a fake charity, or some guy peddling roses that you could give to your lady.

None of us ever had a lady. All we ever bought was booze.

During the mid-1980s, the main bartender at Harper’s was a guy named Dick. He looked to be in his early 30s, had a thick brogue, a tricksy grin, and a bad ass handlebar mustache.

Bartenders are like lovers; you never forget your first.

Dick was our guy, and in true New York City fashion, you take care of your guys and they take care of you. Tipping culture is stronger in New York than anywhere else in the country, and “buy back” is the term for the occasional free round a bartender pours his steady customers as a sign of loyalty and gratitude. These kinds of transactions were standard operating procedure at neighborhood bars. They wouldn’t even be announced. The bartender would simply toss a fresh coaster beside your current drink, and that meant your next one was free.

We tipped Dick well, and he’d give us every 3rd or 4th round on the house. That was probably a little too frequent for the owner’s liking, but the owner never seemed to be around, and those weren’t the only liberties Dick was taking.

After Dick got held up at the bar a few times, he was gone. Word on the street was, they were inside jobs and Dick was splitting the loot. Afterwards, a friend used to joke that you could still see Dick’s nose grease on the mirror behind the bar.

Typical of the whatever-happens-happens-and-no-one-really-gives-a-shit vibe at Harper’s, the jukebox was a fucking catastrophe. It had obviously been put there by a company, probably mobbed up, that made zero effort to understand the business or its clientele. It couldn’t have been anymore generic. Just random pop crap of the most inane order. On weekends it might get some play from stray youngens who came in to get bombed. But mostly it sat there, ignored by the few old Irishmen sitting at the bar, drinking their cheap bottles of Bud, while behind them, the machine, unprompted, occasionally spat out some random miserable Top 40 pop song in a failed effort to attract quarters.

The disjuncture between the bar and its jukebox was jarring. One friend of mine was so taken by the cultural disconnect that he impishly tried to wind up the old timers by blasting Elton John’s “Island Girl.” To his dismay, the old men just sat there, sipping and ignoring it like they would any other song blaring out of that god forsaken box of junk hanging from the wall. My friend was puzzled. Why hadn’t John’s homoerotic, disco inflected bombast sent them into a tizzy? But it was all the same to them.

However, if you took the time to flip through the CDs, without becoming so dispirited as to quit before reaching the end, then at the very back of the catalog you could spot a couple of nods to the fact that this jukebox was actually in an Irish bar. Literally two. It’s as if someone had snuck on two CDs out of guilt, slipping them in when no one was looking.

There was a collection of Irish football songs. And there was The Best of Thin Lizzy.

At the time I only knew two things about Ireland’s first big rock band: “The Boys are Back in Town” was a monster song, and their lead singer, Phil Lynot, was a black Irishman, which to a teenager in 1980s America, just seemed otherworldly.

I still remember the first time I ever heard a black person talk with any kind of British accent. It was the early 1980s and an English boxer named Cornelius Boza Edwards was being interviewed on TV, back when boxing was on TV. When Boza Edwards opened his mouth, it stunned me. Never could’ve imagined such a thing before that. We were all a lot more provincial back then.

So the very idea of Phil Lynot, the half-black, Irish lead singer/bassist of Thin Lizzy, seemed conceivable, but just barely.

We played a lot of Thin Lizzy down at Harper’s. As one of the few CDs we thought had songs worth trading quarters for, we made our way through it, quickly moving beyond “The Boys are Back in Town.” I still remember hearing “The Rocker” for the first time. The guitar solo was wicked. Captivating. Blistering. Kinda like hearing “Free Bird” for the first time. But instead of whiny, clichéd lyrics that made excuses for breaking up with a woman, “The Rocker” was literally about kicking someone in the face.

I am your main man if you’re looking for trouble
I’ll take no lip ‘cause no one’s tougher than me
If I kicked your face you’d soon be seeing double
Hey little girl, keep your hands off of me ‘cause I’m a rocker

Dude’s so bad ass, he can’t even be bothered to fuck right now. First he’s gotta dust off this punk.

And we played the song “Jail Break” so much that it soon became a euphemism; you’d call up a friend, simply say, “Hey, let’s have a Jail Break tonight,” and it was understood that you wanted to go to Harper’s.

So a decade later I had high hopes when, while sorting through a bin of discount cassette tapes at a gas station along a rural highway somewhere in the wilds of America, I stumbled across Thin Lizzy’s album Fighting.

If you could pick only one gerund as a name for your album in 1974, that sure as shit would’ve been it.

The cover featured the band’s four members standing amid the rubble of an abandoned brick building. They looked like they were ready to kick some ass, but in a reasonably stylish manner. They came to rock. On the bottom was a list of ten songs. I didn’t recognize any of them.

I bought the cassette for a few bucks and popped it into the tape deck of my friend’s car. The first song was “Rosalie.”

It’s a straight ahead rocker. Of course it is. The album is chock full of straight ahead rockers like “Rosalie” and the title track, with some Gaelic-twinged stuff mixed in for good measure. My first and only Thin Lizzy album, Fighting immediately joined my collection of cassettes to be played in the tape decks of cars.

The car tape deck period of my life lasted until 2004, when I totaled my VW Golf. Ever since then, I’ve almost never listened to my old tapes. And so Fighting fell by the wayside. Until late June, 2014, when my friend Rose posted “Rosalie” on her Facebook page, and it got seriously stuck in my head.

There’s a certain poetry to all this. And I’m not referring to “Rosalie’s” lyrics. Sorry, but as catchy as the song is, lines like She knows music/ I know music too, you see/ She’s got the power/ I got the power, Rosalie don’t qualify as poetry.

Rather, there’s somewhat poetic that Rose put “Rosalie” in my head.

I’ve had some great bartenders in my life. Dick was the first. Susan at Puffy’s way downtown was incredible. Kelly at the recently closed Dizzy Izzie’s in Baltimore is a peach, and Anne over at 3 Miles House is a sassy, old, blue-haired Korean matriarch of the first order. But the very best of them all was Rose from the International Bar on 1st Avenue, which I frequented during the 1990s. 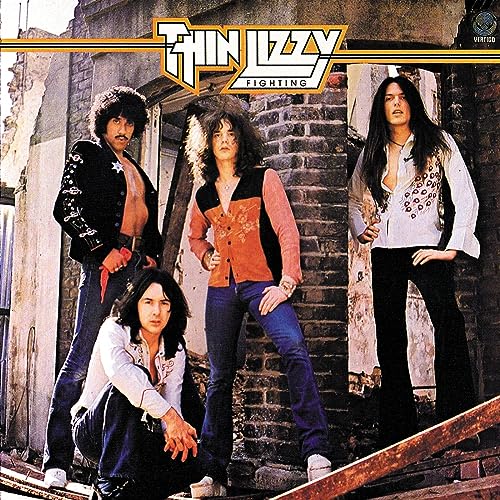