Last time at 3QD we talked about constructible numbers. We followed in the footsteps of the ancient Greeks and asked what sorts of numbers we can get as the lengths of line segments made using only a compass and straightedge. In the end we found that starting with a line segment of length one, a compass and straightedge, and enough patience, we can make any rational number, the square root of any rational number, and, indeed, any number which can be made by a finite sequences of additions, subtractions, multiplications, divisions, and square roots. Even crazy numbers like √(13/2 +14.3(√7)) are constructible. In short, compass and straightedge constructions are equivalent to being able to solve arbitrary quadratic equations.

On the other hand, that's it. Logarithms, exponentials, π, and even the roots of higher powers are all impossible. No matter how hard we try, the cubed root of 2 is not constructible. The 2000-year-old challenge to double the cube is forever out of reach.

An ellipse (from Wikipedia).

But, of course, this all depends on our initial decision to only allow a compass and straightedge. If you also gave me two pins and a string I could use them to make an ellipse. "So what?", you say. After all, what does the ability to draw an ellipse buy you? Well, it has been known for centuries that you can double the cube and trisect the angle if you are allowed to use parabolas and hyperbolas. In 1997 Carlos Videla determined exactly which numbers are constructible using a straightedge and the conics (circles, ellipses, hyperbolas, and parabolas). In short, the addition of the conics allows you to take cube roots. No more, no less. Remarkably, in 2003 Patrick Hummel proved that the hyperbolas and parabolas are redundant. Every number you can construct using a straightedge and the conics can be constructed with just the compass, straightedge, and ellipses. Give me an ellipse and I'll solve your cubic equation!

Of course, this is all very Euro-centric. We use the compass, straightedge, and conics because we are in the Western tradition and that's what the Greeks used.

But what about those of us who grew up in Japan? There the ancient geometric tradition is origami. We could just as well ask which numbers are constructible using paper folding. We can make a straight line in the form of the crease made when we fold the paper. If two creases intersect, this makes a point. If we've made two points, we can make the straight line which connects them by folding a crease through the points. Since we can make lines and points, we can say a number is origami-constructible if we can start with a one by one sheet of paper and use paper folding to make a line segment of that length; much like we did for the compass and straightedge.

It seems pretty obvious paper folding is more limiting than the compass and straightedge. After all, with paper folding all you can ever make is a straight line. Not a circle to be seen. Indeed, in the mid-1990's Dave Auckly and John Cleveland wrote a paper in which they identified four geometric operations you can do with paper folding (folding a crease to connect two dots, folding the paper so that one crease lies exactly on top of another crease, etc.) and they described exactly which numbers you can get using their operations. In particular, while you can get square roots of the form √(1+a2), you can't get arbitrary square roots like you can with a compass and straightedge. That is, there are definitely numbers which are compass/straightedge-constructible but not origami-constructible. 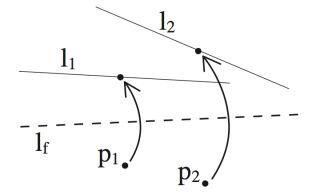 If you already have two lines and two points, in origami you can fold the paper so as to put the two points on top of the two lines. It seems like no big deal, but we will see there is magic in this move!

The good news is that about ten years ago Robert Lang and Alperin and Lang proved Justin's list of seven paper folding operations truly do exhaust the possible moves you can make with origami [2]. There is no worry about another oversight.

But what of the question of which numbers are origami-constructible? Auckly-Cleveland showed that their four operations definitely do less than the compass and straightedge, but what happens when we add the remaining paper folding operations? It turns out that including the magical sixth move is equivalent to being able to solve arbitrary cubic equations! With origami we can double the cube, trisect any angle, and solve any cubic equation! Despite the fact that origami seems more limited than a compass and straightedge, it's actually far more powerful! For example, forming the cube root of 2 is impossible with compass and straightedge but only takes a couple of folds and is downright trivial with origami.

The history of the sixth operation has a surprising twist to it. In 1936, Margharita Beloch, an Italian mathematician, showed how to use the magical sixth move (usually called the Beloch fold in her honor) to solve an arbitrary cubic equation. In the intervening decades her work was nearly forgotten. For decades nobody paid much attention to the mathematics of paper folding. It is only recently that it and her work has been properly appreciated. She was half a century ahead of her time! I recommend the survey article by Thomas Hull if you'd like to learn about Beloch's method.

The recent development of origami mathematics has caused a revolution in paper folding. Robert Lang, Meguro Toshiyuki, and others use mathematics and computers to build designs undreamt of by past origami masters. Here is a single sheet of paper, properly folded: Recent work by Erik Demaine and Tomohiro Tachi shows that any three-dimensional shape made from polygons can be folded from a sufficiently large sheet of paper. They even gave an algorithm and software for doing this.

Why all the interest in the mathematics of origami? Well, of course, it's worth studying just for the fun of it. But in recent years origami has also become super useful. Being able to predictably and efficiently fold and unfold is a valuable skill in the modern world. It is used in everything from the design of airbags and solar panels on satellites to advances in medicine. Knowing what you can and can't do by folding is a key first step. This spring Nova showed a documentary on the mathematics of origami and all the cool things which we now know how to do with folding. I highly recommend it. You can watch the Nova episode here.

[1] You can find the full list of operations here.

[2] Huzita's list had only six operations. But since both lists give you the same collection of origami-constructible numbers people usually don't make much of a distinction between the two. Also, Hatori independently discovered the same list of seven operations.

[3] This is discussed by Hatori here.