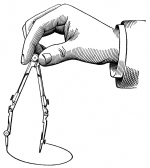 Approximately 1900 years ago Theon of Smyrna authored On Mathematics Useful for the Understanding of Plato. In it, Theon wrote:

For Eratosthenes says in his writing he Platonicus that when the god pronounced to the Delians in the matter of deliverance from a plague that they construct an alter the double of the one that existed, much bewilderment fell upon the builders who sought how one was to make a solid double of a solid. Then there arrived men to inquire of this from Plato. But he said to them that not for want of a double altar did the god prophecy this to the Delians, but to accuse and reproach them the Greeks for neglecting mathematics and making little of geometry.

Thus the problem of doubling the cube was born. If we are given a cube of a certain volume, can we construct a cube whose volume is exactly double? We might as well start with the cube as a practice problem and worry about the more complicated shape of an altar once we've got the cube sorted out. Also, up to changing our choice of units, we can safely assume the cube has volume exactly 1. We've now got a simple geometry problem: given a cube with volume 1, how to construct a cube with volume 2? Like many of the best questions, this seemingly innocuous problem opens a Pandora's box of interesting things to ponder.

Plato warns us not to neglect our mathematics. As mathematically minded folks we know we should first decide on ground rules. If we don't bother to first agree on clear, unambiguous definitions and axioms, then we'll just end up talking past each other. This might play on cable tv, but it's not mathematics. Besides, like writing a sonnet or a haiku, half the fun in math is in the constraints. Like Robert Frost said, "I'd sooner write free verse as play tennis with the net down".

Since a cube is completely determined by its side length and the volume is just the side length cubed, doubling the cube comes down to the problem of using a straightedge, compass and a line segment of length 1 and, by hook or by crook, construct a line segment whose length is the cubed root of 2. 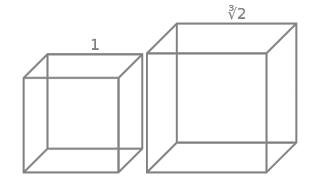 Doubling the Cube (from Wikipedia)

After fiddling with your straightedge and compass for a millennium or two you might start to suspect that the god was putting one over on the Delians (after all the Greek gods weren't known for playing fair). But how in the world could you ever know for certain that it wasn't possible? After all, tomorrow you might find That One Weird Trick Which Doubles the Cube!

Math is nearly unique in that you can show things are never, ever possible. I was blown away when I first saw the proof that the real numbers cannot be put into an order list numbered by the counting numbers and that the square root of two cannot be written as a fraction of two counting numbers. In retrospect, it was the proofs of impossibility which first converted me to math.

To prove doubling the cube is impossible requires we be a bit more precise. What exactly does it mean to "construct" a line segment of a certain length? A line segment is made by connecting two points with a straight line. What matters for us, then, is being able to construct new points.

With our centuries of experience we have discovered that there are only five basic operations you can do with a straightedge and compass:

Notice that only operations 3, 4, and 5 give us new points. So now we are down to figuring out which points in the xy-plane starting with the points (0,0) and (1,0) and using a finite number of these operations [1]. Let us call such points constructible points.

Starting with any two constructible numbers a and b, you can play with operations 1-5 and figure out how to construct a+b, a-b, a*b, and a/b (assuming b isn't zero, of course). That is, the collection of constructible numbers can be added, subtracted, multiplied, and divided. A number system in which you can do all these standard operations is known to mathematicians as a field. Our usual number system, the real numbers, is the standard example of a field. But other fields include the rational numbers (the numbers which can be written as the ratio of two integers: for example, 1/2, -1823/21, and 5/1) and more exotic ones like the collection of all real numbers which can be written as a+b√5, where a and b are arbitrary rational numbers [2].

Using constructible numbers we can do any additions, subtractions, multiplications and divisions we like. In particular, starting with 0 and 1, we can use these operations to make any fraction we like. So, for example, without having to construct it by hand I can say with certainty that 424/2017 is a constructible number. We now know that the collection of all constructible numbers includes all the rational numbers. But the million dollar question is if ³√2 is constructible! Since it's not rational, the jury is still out.

We have to dig into operations 1 through 5. With operation 1, we can make the straight line which connects two points which we've already made. That is, we can construct the line which connects any two constructible points. If you were to write down the equation of that line as ax+by+c=0, then you'd see that a,b, and c are all constructible numbers. Similarly, if you were to do operation 2, then you would be making a circle (x-a)2 + (y-b)2 = r2 with center (a,b) and radius r, where a,b, and r are all constructible numbers.

But it is operations 3 through 5 which construct new points. This is where the real action is. For example, if you have two lines constructed using operation 1, then their crossing gives you a new constructible point and new constructible numbers. Let's take lines ax+by+c=0 and dx+ey+f=0 where a,b,c,d,e, and f are all constructible numbers and using a little algebra we can solve for the x and y of their intersection. When we do so we see that the x and y are nothing but numbers obtained by adding, subtracting, multiplying, and dividing a,b,c,d,e, and f. For example, if all of these were rational numbers, then x and y would again be rational. The intersection of two lines gets us no closer to the cubed root of two.

On the other hand, in operations 4 and 5 there is an equation of a circle. Solving for the intersection of a line and circle or the intersection of two circles leads us to using the quadratic formula. Which means that square roots can be constructible numbers. And, indeed, with some trial and error, you can find a method which lets you compute the square root of any positive constructible number. But what about cube roots?

So far we haven't used any mathematics which couldn't have been explained to Plato himself. To prove that the cube root of two is not constructible is going to require heavier guns. For eons mathematicians have had a keen interest in knowing which polynomial equations can and cannot be solved and how to solve them. To answer such questions, just like for our Cube Doubling problem, you have to first set the rules of the game. In particular, you need to decide which number system you are using to know which solutions are allowable [3].

In the early 1800s, folks like Niels Abel and Evariste Galois developed what is now known as Galois theory. They were interested in understanding how exactly you can extend a number system (say, the rationals) to a larger number system (like the real numbers) in order to obtain more solutions to their equations. Since the set of all constructible numbers is a field which contains all rational numbers and is contained within the real numbers, Galois Theory is just the tool we need to understand which numbers are constructible. Galois famously died in a duel at the age of twenty. Fortunately for us, he stayed up the entire night before writing up his work on the study of fields!

With Galois theory in our tool chest we can prove that no matter how many additions, subtractions, multiplications, divisions, and square roots we perform, we will never, ever, ever, be able to construct ³√2. It is absolutely impossible to Double the Cube with a straightedge and compass. You can, however, construct the golden rectangle (from Wikipedia):

The ancient Greeks gave us two other geometric challenges which we now know are impossible. While bisecting an angle is easy, trisecting an arbitrary angle with a straightedge and compass is impossible. Despite the fact that Pierre Wantzel proved it was impossible in 1837 using field theory, trisector enthusiasts continue to try!

The third was to construct a square whose area is exactly the same as a given circle. In particular, a circle of radius 1 has area π so we are meant to construct a square with side length √π. As we saw, square roots are no problem for a straightedge and compass. Here the problem is that π itself is not constructible! Again field theory is the key.

So which numbers are constructible? We now know that the collection of constructible numbers is exactly all possible numbers you can get by starting with rational numbers and doing any finite sequence of additions, subtractions, multiplications, divisions, and square roots. In short, it is the smallest subfield of the real numbers which allows arbitrary square roots of positive numbers.

Or, instead, imagine we live in Japan. We might prefer to use origami instead. This leads us to the question of what we can make using just paper folds. There is a wonderful story to be told about origami numbers, but that will have to wait until next time.

[1] If we start with a blank sheet of paper we might as well mark an x-axis and y-axis so we have coordinates. And we might as well do it so that our starting line segment of length 1 lies exactly from (0,0) to (1,0).

[2] It is a nice calculation to check that if you start with a a+b√5 and c+d√5, if you add, subtract, multiply, or divide you get another such number. Division is definitely the most interesting one!

[3] For example, x2-3 has √3 as a solution, but the square root of three isn't a rational number. It is not allowed if your number system (aka field) is the rationals. It is allowed if you allow all real numbers, though.