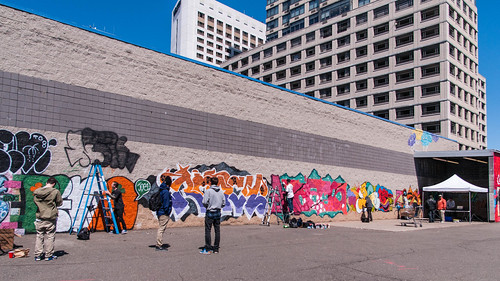 On Saturday April 25, 2015, some 20-30 graffiti writers and street artists converged on the now empty Newport Pep Boys store in Jersey City, New Jersey. What were they there for? To “get up” as the lingo has it. To spray paint on walls.

That activity is vandalism in Jersey City, as in most other cities America (though, like a number of cities, Jersey City also has a public mural program). And a number of these artists have police records for committing such vandalism. For that matter, I once got a summons for “aggravated trespassing” for taking photographs of graffiti on posted land belong to CSX, the large railroad conglomerate.

But it’s not vandalism if you have permission. And these writers had permission. The permission was arranged by Greg Edgell, proprietor of Green Villain, “a small group of social entrepreneurs and creatives that in the past few years have developed a diverse portfolio of projects and partnerships.” Those projects include a number of mural projects in Jersey City, where Edgell lives, and across the Hudson River in New York City.

Disclosure: I’ve known Edgell for several years and collaborate with him on projects.

In the Fall of 2014 Edgell had contacted the owner of Pep Boys about putting art on the rear wall. Why? Because it is very visible, facing the Hudson-Bergen Light Rail where it is seen by thousands of commuters everyday. He got permission and by the end of November the wall had been covered. 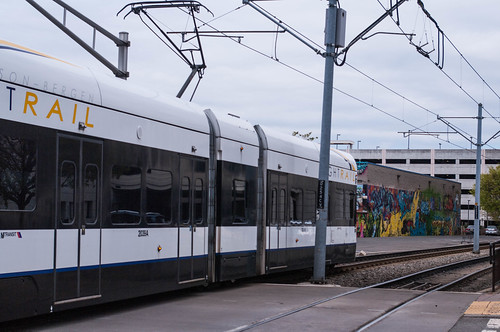 Winter rolled on through, gave way to Spring, and Edgell learned that that Pep Boys building was going to be torn down to make way for new construction. This wasn’t a big surprise, as he already knew the building would be coming down. But not so soon.

All that art, gone!

Cover the whole building before it comes down.

So Edgell got permission from the owner and put out the call. The artists who came, came knowing their art was slated for destruction. But then that’s how it is in the graffiti world. You pretty much assume you’re art won’t last. If it isn’t buffed (that is, painted over) by the authorities, other artists will go over it sooner or latter. Failing that, the weather will erode the paint.

But then, nothing’s permanent. Nothing. Hence as the sticker says 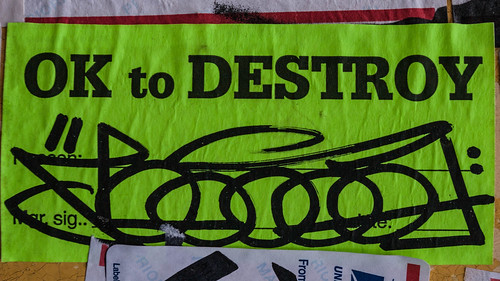 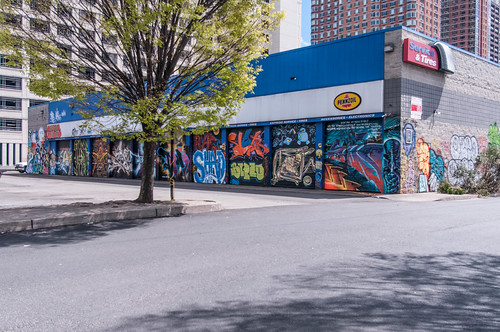 Here you see the roll doors of the Pep Boys service bays, each allocated to a different artist. The second one in was given to Chopla. Here’s the top segment of that door: 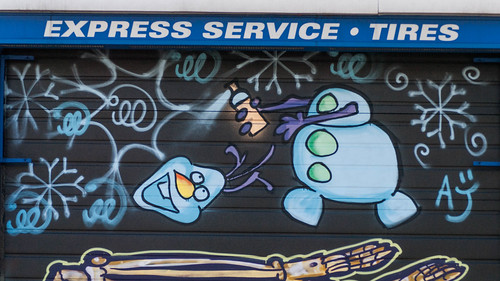 We’ve got some little squiggly designs: some that look like snowflakes, some spirals, what have you. In the middle, though, we have a decapitated figure of some sort holding a aerosol can in its right hand, with its head rolling on the ground. I suppose it means something, but that’s not why I’m pointing it out.

Chopla has filled the lower part of the panel with a skeleton, one of several he contributed to the Pep Boys project. It’s clearly visible behind some onlookers and the scaffold Choppla’s standing on: 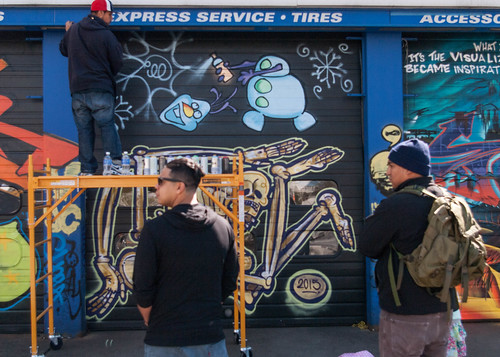 Notice the date, 2015, at the lower right. That is, of course, common. You date your art. And Chopla’s something of a signature at the middle to the left of center here: 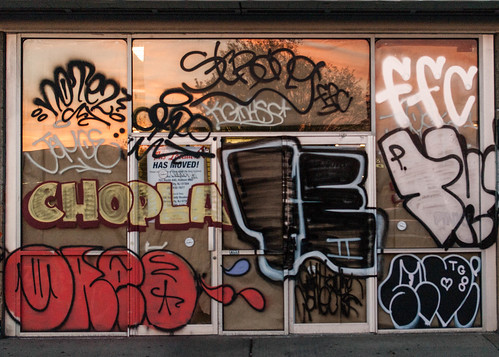 Those are the glass front doors of the building. Chopla’s put his name there in block letters. Other artists have used bubble letters. These are known as throwies or throw-ups. Why? Because it’s easy to throw them up on a wall in five minutes or so. Up at the top we see the single line names known as tags or handstyles. They’re even quicker.

This too is a name: 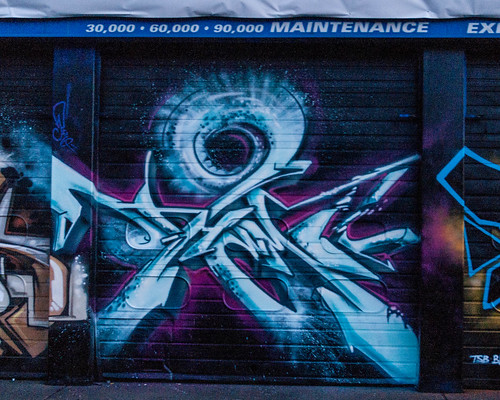 It says Themo, though you’ll have to do a bit of analysis to resolve those forms into the name. This kind of work, known as a piece (from masterpiece) obviously takes longer to do than a tag or a throwie. This is not something you’re going to do in broad daylight in a visible and highly trafficked area. Unless, of course, you’ve got permission.

In the past couple of years Themo has taken to splattering paint on the surface he’s painting, which is clearly visible in this close-up: 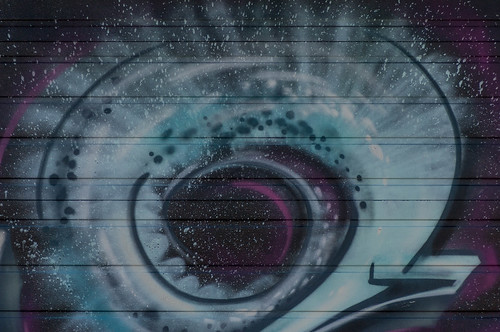 He belongs to the PFC crew – a crew is an informal group of writers who often paint together. Themo often paints with Era, as he did on this occasion. Era’s piece is next to his: 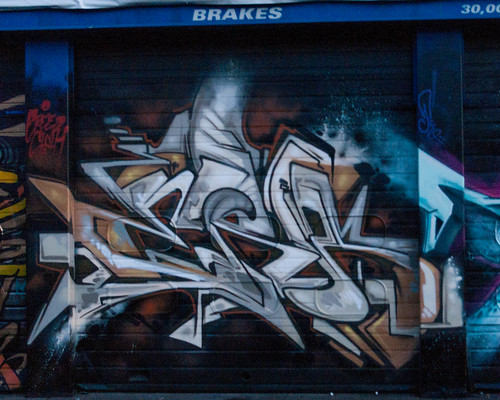 Notice that the two pieces interlock smoothly on along their common border: 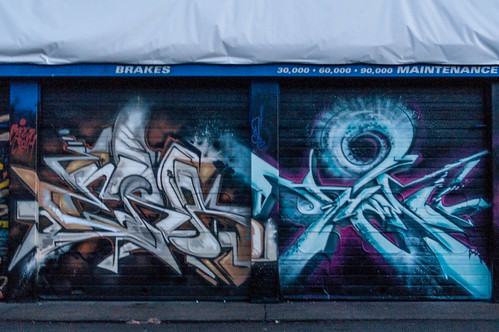 When a group of writers works together on a wall, the result is called a production. This next flick shows part of a very large production the AIDS (And It Don’t Stop) crew put on the rear, track-facing, wall of the building: 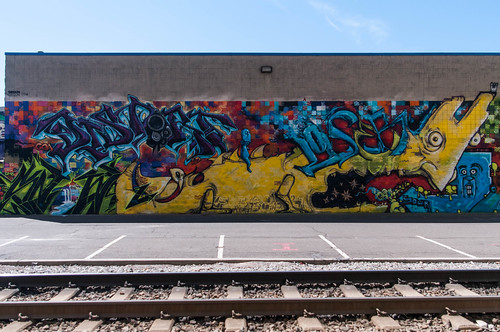 The large yellow mass is some kind of animal creature. The eye and nose are obvious at the right, as is the creature’s mouth. Given that, it’s easy to spot the legs and between the legs, riding the creature, is a small blue humanoid. The name of the artist, Loser, rides the creature’s neck.

At the left, along the top half, we see a piece by Distort. The “O” has been rendered as the barrel and cylinder of a pistol. The imagery of graffiti tends toward the strange, macabre, and weird.

This is from the other end of the production: 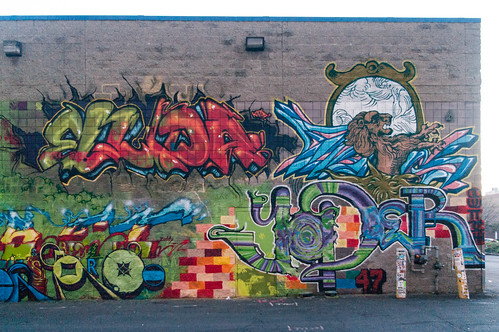 If we go around that corner (the northeast corner) we find this soup of letters and creatures (known as characters): 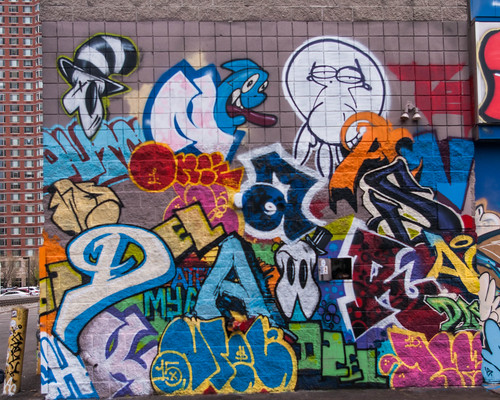 That’s, in effect, a roll call of the AIDS crew. Here’s sticker the one of the crew slapped on a pipe at the site: 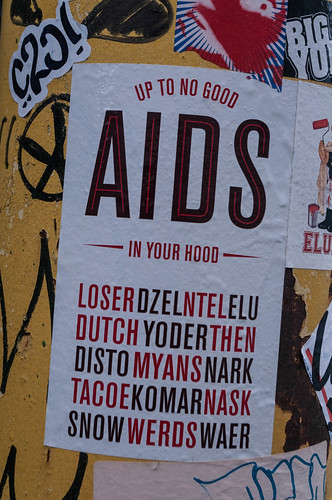 The AIDS sticker is on the pipe at the right, near the top:

Obviously, a good many of the artists who contributed to the building slapped a sticker on one of those pipes, or tagged one of them. But some of those stickers belong to artists and others who just happened by. This sticker belongs to Plasma Slugs: 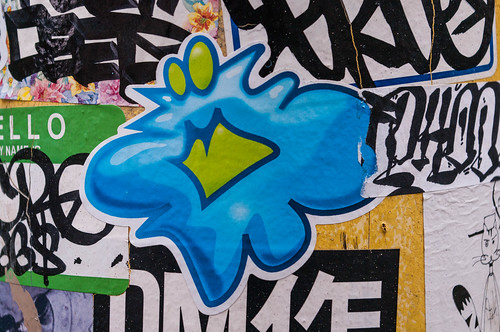 He’s from Brooklyn and, rather than writing his name, he uses that slug-looking creature as his mark. If you look around Jersey City, New York City, and elsewhere (such as Amsterdam) you’ll find variations of that slug.

The point of stickers is obvious. It’s quick and easy to slap one up somewhere. Where there’s one sticker, others are likely to follow. It’s a way of getting your name out there.

The people who started graffiti were mostly poor and mostly forgotten. And so they proclaimed their existence on the cars of the New York City subway system and fought a battle with the authorities for two decades before more or less giving up on the subways. By that time, however, graffiti had been adopted by hip-hop and extreme sports and had made its way around the world.

And now, for the first time in its history, Jersey City has had an open graffiti jam in broad daylight in a very visible space. It’s certainly not the first time a group of writers have gotten together and painted, but those other times and places where out of public view. This is different. Just what will come of this difference, that’s not at all obvious.

You couldn’t have seen this five or ten years ago: 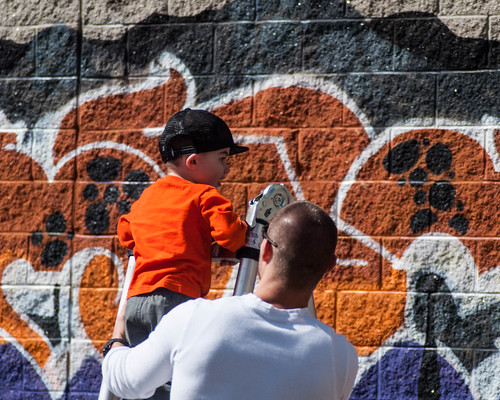 You couldn’t even have seen it a year ago. What will have changed when the child’s old enough to hold a can and wield it with style and grace? That won’t be too long from now, but we’re living in strange times. Will another hurricane have blown through and flooded Jersey City likes Sandy did in 2012? Will a woman have been elected President of the United States? Will this graffiti jam have become an annual event in Jersey City?

I’ve written two other posts about graffiti for 3 Quarks Daily:

I’ve written a good many graffiti posts for New Savanna. Here’s a my posts on the Pep Boys graffiti jam. These posts are about various Green Villain projects.