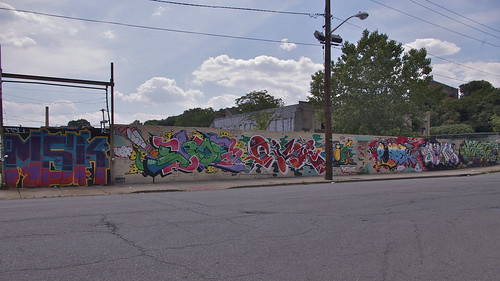 …though many don’t think of it as art at all, but as crime. After all graffiti – by which I mean the styles that originated in New York City and Philadelphia in the late 1960s and early 1970s – was born when kids and young adults began spray-canning their names on other people’s walls without permission. They were committing crimes, and some of them did time for it. Still do.

Art? Crime? Art? Crime? The question isn’t a real or least not a very deep one. Why can’t graffiti be both artistic and criminal? 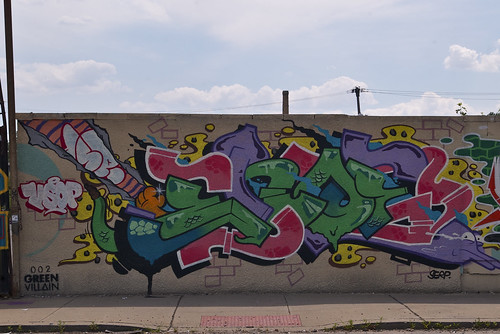 Such mythical, but nonetheless real historical, figures as Taki 183 and Cornbread weren’t trying to make art. It’s safe to say that many of the early writers had never been inside the Guggenheim, the Met, or the Barnes and had never taken Art History 101 in college. They just wanted to get their names up, to be noticed. Not their real names, that is, the names on their birth certificates. But names they assumed for purposes of getting fame; names that had one significance within graffiti culture but that simultaneously were opaque and provocative to the outside world, names that told of another society walking the streets and claiming the walls.

As such graffiti was born outside the categories that had become conventionalized in mid-century Western culture. It just oozed up from the street. And THAT’S one reason graffiti is important. It’s so new it doesn’t fit. 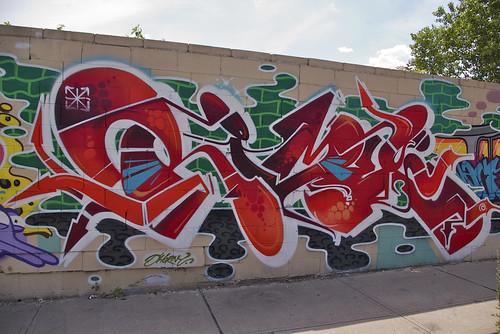 Late in 1972 Jon Naar, a photographer, and Norman Mailer, a writer, were commissioned to do a book on graffiti. They took to the streets of New York City, Naar snapping photos, Mailer observing and interviewing, and the book came out in 1974: The Birth of Graffiti. It quickly became known as the bible of graffiti and copies were passed from hand to hand, spreading of the gospel according to aerosol.

Naar’s photographs were superb. Some captured the full sweep of the streets surrounding the writing; others were tightly focused on the letters. Naar established photography as an integral component of graffiti culture.

Though at the time no one knew that it would evolve into such a thing as graffiti culture, much less that it would spawn something that would be called street art – also on walls, but not necessarily aerosol, not based on the name, think Banksy. No one knew what it was. How could they? The world’s changing too fast for us to see it happen. 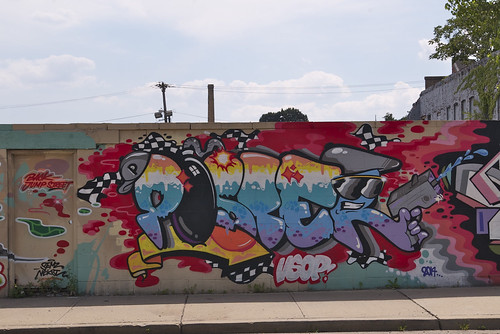 But Mailer, egomaniac and Pulitzer Prizer that he was, took it seriously. He told us about trips he took to art museums so he could contextualize the graffiti he saw on the streets, in subway stations, and on the cars. That is to say, he recognized that THAT contextualization, nothing less than Western capital “A” Art, was necessary.

He interviewed graffiti writers. One of them, Cay 161, told him, “The name is the faith of graffiti,” and Mailer slapped in on the cover of the book as a title. It’s all about the name, which, incidentally, is why they call themselves writers. That’s how you inscribe your name; you write it.

Mailer also interviewed the Mayor of New York, John Lindsey, who was trying to eradicate graffiti. And so it went for the next two decades or so, the writers vs. the City. The writers would do a car and the City would buff it, that is, apply a chemical wash to dissolve the graffiti. 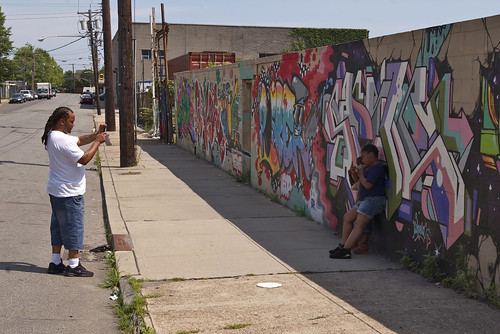 In 1984 graffiti’s second bible appeared, Subway Art, by Martha Cooper and Henry Chalfont. It documented the golden age of New York City graffiti, writers such as Zephyr, Seen, Kase2, Dondi and Lady Pink. By this time the writers had figured out how to make integrated compositions that covered an entire subway car; some even managed multi-car extravaganzas. We saw the flowering of wild style graffiti, pieces where the letters we so cut-up, twisted, and otherwise embellished that it was all but impossible to read the name.

But the name was still there, for the name is the faith of graffiti. Western art in the Renaissance arose from a reconceptualization of space and the artist and viewer’s relation to that space. That space was reconceptualized again in the late 19th and early 20th centuries by impressionists, cubists, surrealists, and abstractionists, who reconfigured and ultimately abandoned the visible world. Now along comes graffiti and inscribes its art within, not a space, but a name. 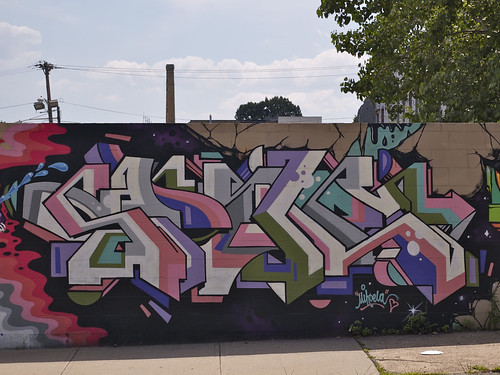 The name as the axis and framework of the world. The conception is almost biblical. Is that what Mailer had seen in Cay 161’s statement?

Are we on the threshold of a new culture, one that’s transnational in scope? 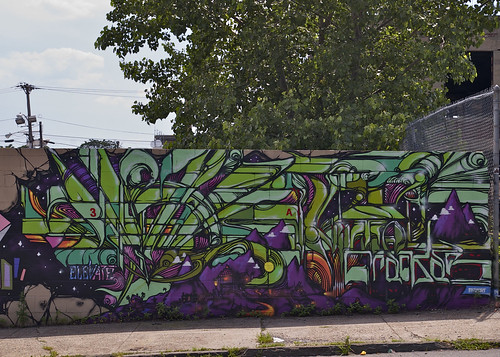 And then, on November 1, 2010, all hell broke loose. The Underbelly Project hit. As the New York Times put it, the exhibition:

defies every norm of the gallery scene. Collectors can’t buy the art. The public can’t see it. And the only people with a chance of stumbling across it are the urban explorers who prowl the city’s hidden infrastructure or employees of the Metropolitan Transportation Authority.

The Underbelly Project was mounted in an abandoned Brooklyn subway station by Workhorse and PAC. Over a period of a year and half they brought a hundred or so graffiti writers and street artists into the station under cover of night and let them do whatever they wanted to a section of the wall. But they only had a night; time was precious.

At the end they brought in a photographer or two and a reporter so the story could be told, and the art be seen. But when the tour was over, they sealed it up so no one could get down there to see the art live and in person.

Fat chance! Did they really think that no one would find this long abandoned subway station? It was quickly found and others went in, some just to see, others to trash the place, and others to take more flicks.

The whole thing just didn’t make any sense. Which, I warrant, is the point. It’s outside the of the friggin’ box, between the keys on the piano, in limbo. But real. 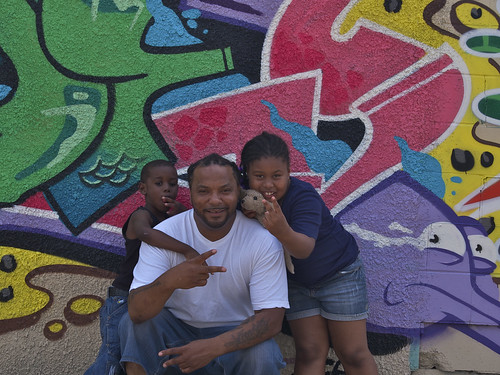 And now four years later we have The Mana Museum of Urban Art and rumor has it that some of the folks involved in the Underbelly Project are involved in this above ground legit enterprise. But how could they not be, given the scope of the two projects.

This Museum is on the other side of Manhattan from the Underbelly Project. It’s in Jersey City, in an abandoned ice factory. If you look at the photo in the previous link you’ll see that, in it’s present state, the building has graffiti on the inside. I have no idea whether or not the existing graffiti will be preserved or painted over.

Nor do I think it much matters. Graffiti long ago made its peace with impermance.

Have we made our peace with graffiti?

A large and elaborate graffito is called a piece, derived from “masterpiece”. A group of pieces executed on the same wall at the same time is called a production. The production I’ve photographed for this article was made about a month ago and is in Jersey City roughly a mile south of the new museum. It was organized by Green Villain.

Bill Benzon’s blog, New Savanna. My graffiti posts are HERE. Here’s a series of posts on the Underbelly Project, make as its effects rippled through the blogosphere.