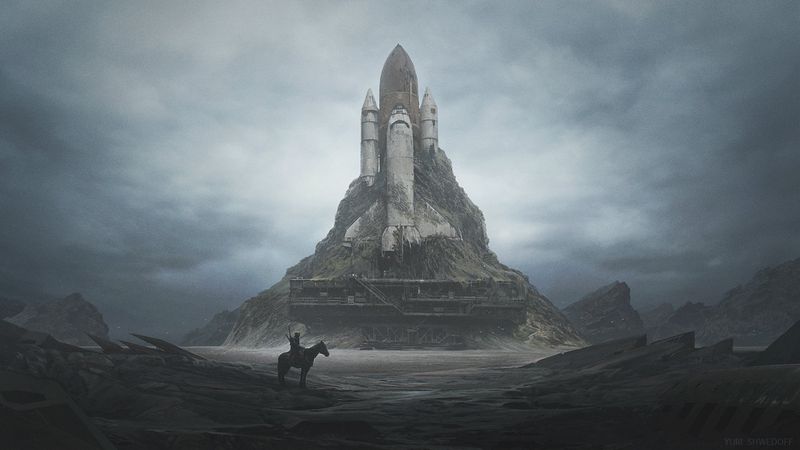 Lauren Davis extemporizes about how astronauts became known as gods:

The stories told of ancient beings so powerful that they could fling themselves into space and explore the points of light in the heavens. When Lady Adelaide moved into one of their unused crafts, many called it blasphemy. She called it research.

That's what I wanted to tell him about. But the evening when I finally had my chance to chat with a former astronaut and now NASA leader, I had lost my voice.

He was standing there holding court about the state of science education in the country. He was also discussing the lack of political vision, and I thought how the level of this decline came with an astounding –and perhaps corresponding– level of malaise. Looking back, other than World War II and perhaps the country's early days of Revolutionary politics, has anything truly excited and united people here more than scientific innovation and the space program? Apropos of this, not so long ago a friend, who had just turned 50, listed in a Facebook post several of what he considered to be the highlights of his half century on earth– and of eight great achievements, three were space related (and of the other five, only one, the eradication smallpox, was even serious).

So, how could we let it decline?

Manned missions to Mars is the next big dream it seems. Not surprisingly, when the Dutch non-profit outfit Mars One held open applications for new astronauts, the largest group by far to apply were Americans–and this was for a one-way mission!

One could argue that discovery is something that is inherently part of the human condition and that space is just in our blood. So, also not surprisingly, the former astronaut mentioned above spoke excitedly about Mars. “A human astronaut can do what it took the robotic rover to do in a long day in under twenty minutes,” he said. “And, let's face it, Mars is the only place humans could possibly live,” he continued.

Walking away, I felt sad to think how much the space program had declined. For if the moon is now a faraway dream how impossible would a manned mission to Mars be? I doubt we are even twenty years away from sending American astronauts to the moon again–unless maybe on a Russian (or Indian?) rocket… So how much further and more impossible is Mars?

My own favorite potential NASA project is an international space station at L2. They call it a “deep-space station on the moon's far side,” and there are so many selling points to the idea. Not only would it utilize all the existing long-term space habitation technology, but it would focus international cooperation on astronomy–something that has been lacking in the low earth orbit station, maybe? It would be the furthest humans have ever been and would certainly facilitate many more lunar trips as well. My friend Mark though laughed at my typical faintheartedness.

What? People in the L5 Society would spit at your L2 idea.

This goes way back to our younger years–say 30-40 years ago. The young Mark (like the young Leanne) had been fascinated by the ideas of the 1970s visionary Gerard O'Neill. A physicist at Princeton, O'Neill was a genius. And he is probably best known for his incredible ideas on creating space habitats along the stable Lagrangian points at L4 and L5–hence Mark's derogatory comment about my L2 space station ambitions.

(L5 Scenerio in a nutshell here)

O'Neill's ideas seem both wonderful –and fanciful– from today's perspective. But they also make a kind of straight-forward sense. O'Neil had mapped out all his ideas in his book, High Frontier. And I notice that in the new introduction for the 2001 edition, Freeman Dyson stated that, O'Neill died in 1992 seeing humanity no closer to fulfilling his bold vision. And that not just that, but in many ways we've actually backslided; since the International Space Station (and the current role of NASA) is “not a step forward on the road to the High Frontier. It's a big step backward, a setback that will take decades to overcome.”

In O'Neill's seminal article on his plans for space habitation in L4 and L5, The Colonization of Space which appeared in Physics Today in September 1974, he included his timeline for the various stages of the project in Table 1. Under the table, he adds, From about the year 2014, I assume a doubling time of six years for the colonies; that is, the workforce of a “parent” colony could build a “daughter” colony within that time.

I bet if O'Neill knew we were not even able to make a manned moon trip in 2014–he would roll over in his grave! There have been advances in technology and medicine to be sure… but somehow it seems like in many ways big dreams like manned space missions are missing nowadays?

Or maybe it's simply that Americans are no longer able to think in the long term. There was a wonderful posting at Brain Pickings on Thursday, called The History Manifesto: How to Eradicate the Epidemic of Short-Termism and Harness Our Past in Creating a Flourishing Future. She quotes Brown University history professor Jo Guldi and Harvard historian David Armitage:

A specter is haunting our time: the specter of the short term.

We live in a moment of accelerating crisis that is characterized by the shortage of long-term thinking… Almost every aspect of human life is plotted and judged, packaged and paid for, on time-scales of a few months or years. There are few opportunities to shake those projects loose from their short-term moorings. It can hardly seem worthwhile to raise questions of the long term at all.

It's a wonderful post and I highly recommend. In a sad mood, last night, my astronomer and I were watching a Carl Sagan tribute video on space colonization and toward the end, the great Carl Sagan says this about collective dreams (and sacred projects):

In modern Western society,” writes the scholar Charles Lindholm, “the erosion of tradition and the collapse of accepted religious belief leaves us without a telos [an end to which we strive], a sanctified notion of humanity’s potential. Bereft of a sacred project, we have only a demystified image of a frail and fallible humanity no longer capable of becoming god-like.” I believe it is healthy—indeed, essential—to keep our frailty and fallibility firmly in mind. I worry about people who aspire to be “god-like.” But as for a long-term goal and a sacred project, there is one before us. On it the very survival of our species depends. If we have been locked and bolted into a prison of the self, here is an escape hatch—something worthy, something vastly larger than ourselves, a crucial act on behalf of humanity. Peopling other worlds unifies nations and ethnic groups, binds the generations, and requires us both to be smart and wise. It liberates our nature and, in part, returns us to our beginnings. Even now, this new telos is within our grasp.

It is such a wonderful piece about the way space and the stars (and science) can generate a sense of wonder and inspire us to dream big. For my own part, like many kids, as a child I wanted to become an astronaut. For me, all wonder started with what was a tremendous love and fascination with space. I spent hours and hours pouring over astronomy books but also many evenings in front of our house, sitting on the driveway just staring up at the stars. Do kids even do that anymore?

I don't really know what Sagan means by “sacred projects.” But it must have something to do with long term collectively held projects that generate shared meaning. Philosophers continue to urge us to find this kind of wonder in science, and I think it is true that if we don't find something bigger to dream about and something that will enable us to “escape the prison of the self,” then we are doomed. (Doomed to be left as man the eternal consumer, as Terry Eagleton writes).

He says Mars (M-A-R-S, Mars Bitches) –while I prefer the manned space station at L2… and human habitation in space…either way, I guess. For as Van Gogh said, no matter what, the sight of the stars makes me dream.

Image above by Yuri Shwedoff