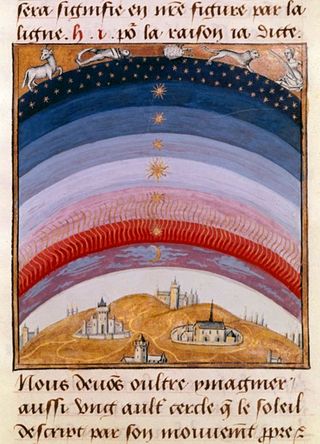 For my part I know nothing with any certainty, but the sight of the stars makes me dream. Vincent Van Gogh

It is my second favorite essay of all time: C.S Lewis' Imagination and Thought in the Middle Ages. First delivered as a lecture in 1956, the piece was later published posthumuously in this collection of his essays in 1966. Unlike in my #1 favorite essay, William Golding's magnificent Hot Gates, CS Lewis does not seek to form arguments or to persuade. What he does instead is to transport the reader back in time, illuminating the medieval world-view using nothing more than words alone.

He begins his essay urging the reader to perform an experiment. He says,

Go out on any starry night and walk alone for half an hour, resolutely assuming that pre-Copernican astronomy is true.

Look up at the sky with that assumption in mind. The real difference between living in that universe and living in ours will, I predict, begin to dawn on you.

Intrigued, I decided to take him up on his suggestion. It so happened that my beloved and I had found ourselves up on the summit of Mauna Kea, on the Big Island. Home to the world's greatest collection of large telescopes, the skies up there are dark and famously clear.

As a girl, I had wanted to become a cosmologist. It was my first great passion. And, in addition to reading astronomy books voraciously, I spent many nights using my amateur telescope to look up at the stars from my parent's house in Los Angeles. Growing up, I drifted away from cosmology, turning naturally toward philosophy. Still, I always loved the stars–for as Van Gogh said, they make me dream. Returning home to Los Angeles about twenty five years after leaving it, I have been dismayed by their disappearance. What happened to all those myriad of stars of my childhood? Indeed, I cannot recall the last time I saw the Milky Way–had never seen it in Japan and was sad to see it was simply invisible from LA now. It is dis-heartening, really, since the splendid vision of the stars at night is something that we used to just take for granted.

Fast forward to last week in Hawaii. Surrounded by snow, the summit of Mauna Kea sits above the clouds. Like from the summit of Mount Fuji, you can stand and watch the clouds roiling beneath you. As with all mountaintops, the summit of Mauna Kea is magnetic and the views exhilarating. We were there to visit the KECK Observatory and were so fortunate to be there as they opened the dome to the night sky at sunset. The galaxies that they observe are so faraway that now it is as much about capturing the distant images as it is about subtracting or reducing the turbulance and distortions that is in the way. So, as exciting as it was to watch the dome open up onto the night sky and see the telescope begin to rotate into position, even more interesting was watching them fire up the laser to use the adaptive optics system to get the clearest images possible of galaxies that are very, very faraway. I thought that, while sometimes it seems that not much really has changed theoretically in astronomy since I was a girl (maybe dark energy and exoplanets?) it was this area of instrumentation and optics that have been revolutionized astronomy during my lifetime. 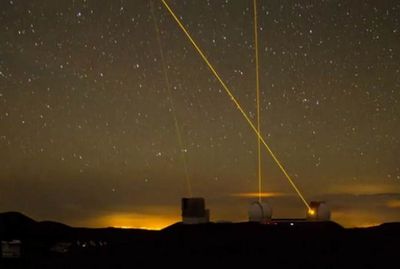 But then came the best part.

After the laser shot up into the dark skies to create an artificial guide star for imaging the scientific target object, we stood there in the freezing cold, allowing our eyes to get used to darkness. It took several minutes, but finally they began to appear— stars upon stars upon stars.

First was Jupiter, more beautiful than I had ever seen her; followed by several very familar constellations –old friends that I have not seen in decades. And then finally–at long last– the vision of the Milky Way appeared before our eyes in all its majesty. 幽玄。

Staring up, I tried to do as CS Lewis suggested to imagine that pre-Copernican astronomy is true. The first thing that dawns on one is that for the Medievals, no matter how impossibly large the universe was to them, it was ultimately something finite–and this is perhaps something that generates a feeling of being embraced, because it forms a kind of edge, or frontier as Lewis says.

You will be looking at a world unimaginably large but quite definitely finite. At no speed possible to man, in no lifetime possible to man, could you ever reach its frontier, but the frontier is there; hard, clear, sudden as a national frontier.

And, secondly, because the earth is at the absolute center, it is not just distance that is felt, but height. So, some stars are not simply a long distance from us, but they are far, far “above” us too.

In this way, beyond the gates of the moon, everything was in timeless and heavenly realm. The stars and galaxies were therefore changeless, necessary and not open to Fortune. The moon was the gateway between our world of decay and change (and Fortune) —and the heavens, which were perfectly finite and regular. Things in the heavenly realm were not evolving and indeed, there were no ultimate causes and effects, not in the way astronomers look for today. On this topic, Aristotle posited an Unmoved Mover, and as Lewis explains:

The infinite, according to Aristotle, is not actual. No infinite object exists; no infinite processes occur. Hence we cannot explain the movement of one body by another and so on forever. No such infinite series, he thought, could exist. All the movements of the universe must therefore, in the last resort, result from a compulsive force exercised by something immovable…Accordingly we find (not now by analogy but in strictest fact) that in every sphere there is a rational creature called an Intelligence which is compelled to move, and therefore to keep his sphere moving, by his incessant desire for God.

This comes deliciously close to CS Lewis' famous Argument from Desire, but it also illuminates the meaning of Dante's Theology of love. For the medievals, says Lewis, an unmoved mover does not move other things in terms of ends, like balls on a billiard table, but rather it is the things that themselves move from out of their own desire, like food moves a hungry man or a mistress moves her lover.

A modern might ask why a love for God should lead to a perpetual rotation. I think, because this love or appetite for God is a desire to participate as much as possible in his nature; i.e. to imitate it. And the nearest approach to His eternal immobility, the second best, is eternal regular movement in the most perfect figure, which, for any Greek, is the circle.

When the medievals looked out at the night sky, they did not see dark skies as we do now, but they rather saw a universe jam-packed with stars and planets and angels and music (Lewis writes beautifully in the essay about how the heavens were filled with heavenly music). And all this activity, they believed was put in motion not by causes and effects but rather out of love. But he cautions us not to misunderstand Dante's famous line about the love that moves the heaven and stars; for this is less about modern conceptions of love with their ethical connotations as it is an appetites or desires. So, as Lewis describes it, the Medieval universe was rotating in its desire or appetite for God. It was a musical, ordered and festive universe; for Lewis says the angels and seraphim spend their time engaged in festivals of great pagentry):

The motions of the universe are to be conceived not as those of a machine or even an army, but rather as a dance, a festival, a symphony, a ritual, a carnival, or all these in one. They are the unimpeded movement of the most perfect impulse towards the most perfect object.

One has to admit that there is something incredibly aesthetically pleasing to understand the universe in these terms.

That night in Hawaii, seeing once again the great splendor of night sky remembered from my childhood, I realized how much we had lost. Our gracious and wonderful host at the observatory said that he really understood the Dark Sky Movement since the vision of the night sky is such a crucial part of our human heritage –and indeed we have lost so much. Before getting back in the car to go back down the mountain, I took one last look at the myriad stars twinkling so beautifully in the sky. Sadly, I recalled Emerson's famous quote about the stars since the envoys of beauty no longer come out to light the universe in smiles anymore.

“If the stars should appear one night in a thousand years, how would men believe and adore; and preserve for many generations the remembrance of the city of God which had been shown! But every night come out these envoys of beauty, and light the universe with their admonishing smile.”

It is perhaps a dying art in English (?), but if you have a favorite essay, I'm all ears.

I wrote about Hot Gates here: Fighting in the Shade of 10,000 Arrows.

Part One of my Medieval Triptych is here: WINGS OF DESIRE (A MEDIEVAL PHYSIOLOGY)

And an added bonus for your mucho reading pleasure: Richard Dawkins and the Ascent of Madness

KECK in Motion here! And my favorite KECK video of all below–enjoy!