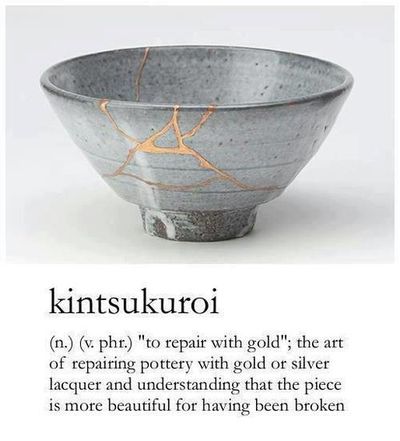 For whatever reason, all of our conversations ultimately ended with him explaining why some aspect of Japanese culture was somehow extraordinary. And this time was no different. After thanking me for the pictures I had sent of our son, he said (apropos of nothing whatsoever):

This idea (草木国土悉皆成仏) is from the Nirvana Sutra, and argues that even things like trees, rocks and other inanimate objects also have a Buddha-nature — and therefore all things are precious.

It was exactly a year ago that I posted this 3Quarks daily piece about the enchantment of things and China's legendary Nine Bronze Tripods 九鼎.

From Xia to Shang
And from Shang to Zhou….

You know the story: Nine bronze tripods– cast back in the mists of great antiquity– were treasured by ancient Chinese Kings as a symbol of their right to rule.

Passed down from dynasty to dynasty– for nearly 2,000 years (or so the story goes) until the time when the First Emperor, Shihuangdi, finally toppled the last Zhou King– and rather than see their transfer to Shihuangdi’s new dynasty– the last Chu King flung the nine bronzes forever into the River Si

Given their symbolic significance, Shihuangdi actively attempted to dredge up the sacred bronzes from the river, but it was to no avail; and scholars of later dynasties saw this as further evidence of the lack of moral virtue of the First Emperor.

I wondered if things have the power to move us in this way anymore? I mean, there was a time (the time Umberto Eco likes to write about) when people were obsessed by fantastical maps and with great quests for objects that held much power. Like mountains, certain objects had the power to draw people in. Relics, for example, were big business. Think of Sainte-Chappele, built to house the Crown of Thorns or recall the mystery surrounding the quests for the Holy Grail. Eco's Baudolino is almost entirely taken up with the relic trade and the role played by faith (faith in the fragrance of these relics–where it is the perfume that is true– not necessarily the relic itself). This kind of devotion to relics is famously practiced by Catholics and Buddhists, and probably harkens back to an ancient propensity for becoming enchanted by things.

It is also a commitment to remember, right? (Poor, dear Henri Fontal!)

The other day on facebook, a friend reminded me of the scene in an old Zhang Yimou film, The Road Home, when a traveling potter arrives in the heroine's village. Asking whether anyone has something needing repair, he is asked to mend a broken ceramic bowl. Even though it would cost less just to buy a new one– and money was tight– still in those days people knew that tending memories and taking care of things was a virtue（美徳). And so he skillfully repairs the bowl. That scene had struck me too, and I told my friend that in Japan, I thought the spirit of craftsmanship is still alive and well. Having a heart to take good care of things (物を大切にする心) is related to concepts of divinity in things and to a natural piety. My best friend’s husband, for example, is really adept at repairing ceramics using gold lacquer and the repairs he lovingly labors over add to the interest or fascination of the the ceramic pieces themselves. Kintsugi.

Craftsmanship is something Hubert Dreyfus (my intellectual hero) has written about for twenty years. Contrasting craftsmanship with “technology,” he says:

To the extent that technology strips away the need for skill, it strips away the possibility for meaning as well. To have a skill is to know what counts or is worthwhile in a certain domain. Skills reveal meaningful differences to us and cultivate in us a sense of responsibility to bring these out at their best. To the extent that it takes away the need for skill, technology flattens out human life. (All things shining)

I think it is true that if technology aims to make things easier, more convenient, and efficient; craftsmanship–in contrast– generates embodied skills, discernment, and care; all things which used to be very central to the way people lived their lives. This still can be found in japan where 職人文化 (craftsman culture) is alive and well; and where people continue perhaps to value quality. The existentialist–like the Confucian or daoist— prioritizes embodied know-how, and this is predicated on a worldview that does not emphasize a mind-body divide so that– (as the brilliant Wang Yangming suggested by 知行合一) to know is to do and to do to is to know. This is what Dreyfus called embodied know-how. And by this he is bringing forth Heidegger's old concept–borrowed from the Greeks– of Poiesis, which itself harkens back to a world where sophia means both wisdom and skill and where poetry was thought to be a form of craft or a practiced skill which not only warms the heart but sheds a special radiance on the subjects it celebrates (Bowra).

With all this in mind, I posted a wonderful video (see below) on the Japanese art of pottery repair with gold lacquer (kintsugi) to facebook. A friend remarked that,

Something is very wrong indeed. Because it is not just things that are being treated as “disposable resources.” For people too–even our own selves– are being thought of as a kind of resource to be used, I would argue. That the excesses of capitalism are undermining the health of this nation seems to be a fact. But there is an ontological component to this as well. And, as Turkish journalist Ibrahim Kalin aptly put it:

The point is that we as human beings are increasingly becoming part of a system that defines our humanity and morality according to instrumental value and nothing else. But reality offers more possibilities than use-value and will to power.

The result is that we are witnesses to the advent of the first genuinely atheist culture in history. The apparent secularism of the 18th to 20th centuries was nothing of the kind. God—absent, hiding, yet underwriting the search for meaning—was in the background all along. In postmodernism, that sense of an absence, or what Eagleton calls “nostalgia for the numinous,” is no longer there. Not only is there no redemption, there is nothing to be redeemed. We are left, Eagleton writes, with “Man the Eternal Consumer.”

As Heidegger prophesized, then, is there really no escape from “man the eternal consumer,” asks Sacks?

My astronomer is more optimistic. He thinks that erotic love is the last frontier by which a person can access the numinous. Beyond pure efficient istrumentalism, love is–as Badiou and Zizek write–all about madness and yes even violence. My beloved believes that purely practical people can still fall madly in love and that this experience is something –in today's world more than ever– that is deeply hungered after. As always, I guess I am more pessimistic and agree with Zizek that it is gradually disappearing as well (as Badious says, “Love is not a contract between two narcissists”). For in a truly disposable culture what things or experiences will have the power to move us beyond the self? It's no surprise, I guess, that this dead-end in the search for meaning is where all roads end in ruins in Continental philosophy today….

Recommended: Andrew Baseman's wonderful blog, Past Imperfect, The Relic, by Guy de Maupassant, Treasure Hunting, an essay by Umberto Eco, and one of my favorite novels of all time, Umberto Eco's Baudolino (and Eco's anti-library by Nassim Nicolas Taleb).

And 3QD: Enchantment and the Nine Bronze Tripods 九鼎

Is the Quest for the Holy Grail Over?

Kintsugi: The Art of Broken Pieces from Greatcoat Films on Vimeo.