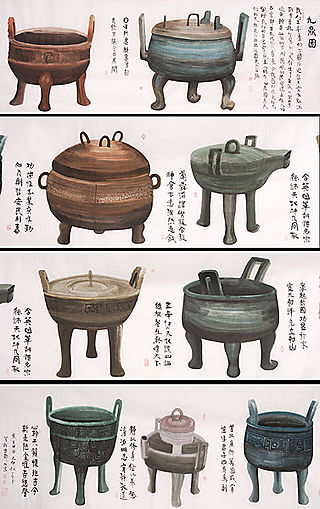 From Xia to Shang
And from Shang to Zhou….

You know the story: Nine bronze tripods– cast back in the mists of great antiquity– were treasured by ancient Chinese Kings as a symbol of their right to rule.

Passed down from dynasty to dynasty– for nearly 2,000 years (or so the story goes) until the time when the First Emperor, Shihuangdi, finally toppled the last Zhou King– and rather than see their transfer to Shihuangdi’s new dynasty– the last Chu King flung the nine bronzes forever into the River Si

Given their symbolic significance, Shihuangdi actively attempted to dredge up the sacred bronzes from the river, but it was to no avail; and scholars of later dynasties saw this as further evidence of the lack of moral virtue of the First Emperor.

There is a well known story about these matters, which supposedly took place at the start of the Eastern Zhou Period (770-256 BC). Severely weakened by external and internal threats, the Zhou kings came to rule in name only. Although the Zhou dynasty was the acknowledged recipient of the Mandate of Heaven and therefore possessor of the Nine Tripods, the real political power was held by the kings and generals of various surrounding kingdoms, chiefly those of the Qin, Qi, Chu, Wei and Yan.

The Chu were especially troublesome, and after some showy military displays near the Zhou capital of Luoyang, the worried Zhou king dispatched his trusty Minister, Wáng-sūn Mǎn (王孫満), to negotiate for peaceful relations with their southern Chu neighbors.

Arriving at the military camp outside the capital, the belligerent Lord of Chu immediately asked Minister Wang about the size and weight of the Nine Tripods (問鼎之輕重)– thereby implying that with their transfer to the House of Chu, the Mandate of Heaven would also be transferred to Chu.

Minister Wang–always quick of wit– sharply responded that unless it could be shown that the Will of Heaven had in fact changed, then it was forbidden to inquire after the weight of the tripods. He then went on to explain that the actual weight of the tripods was beside the point–for in fact, their weight corresponded directly to the virtue of the king who had them in his possession; that is, if the ruler truly held the Mandate of Heaven then the tripods would be immovably heavy. However, should a ruler lack virtue, the tripods would become weightless and therefore meaningless as a political and psychological symbol.

He then drove in his point: The tripods do not matter, virtue does.

The Lord of Chu, moved by the Zhou minister's logic, was thus convinced of the righteousness and virtue of the Zhou Dynasty and a tentative peace was agreed to.

Shihuangdi’s reign lasted a mere 15 years, and it was followed by the Han Dynasty (206 BC-AD 220). Contemporaneous with the Ancient Roman Empire, the Han Dynasty was one of the most prosperous and comparatively harmonious times in all of Chinese history. And, just like in Roman times, the greatness of the Han saw its proof in the fact that ancient bronzes began to emerge from the earth in a fashion a little short of miraculous. This dynasty, where the arts and philosophy flourished, is looked upon as one of China’s past “golden ages.” This intense fascination with antiquity has much in common with the pre-Renaissance idea that a Golden Age was something seen to have been already realized, solely in the reality of the past. It was never, for example, imagined in any sort of hope in the future or an afterlife. And it was in the past that one could find the “exemplary models” necessary for all moral actions, including the methods of enlightened government.

So while they were artifacts of power, their allure wet far beyond that of mere treasures of state. Rather they served as symbols of the virtuous character of a wise king– linking current kings to those exemplary models in the past. In that way, I suppose the tripods had more in common with the Medieval concept regalia and with that of Excalibur.

Foucault, taking his cue from Heidegger was especially interesting on the topic of artifacts. If you think about it, artifacts are –ultimately speaking–historical events. Produced as deed (facere) out of skill (ars, artis), an artifact does not just happen. Rather, like all historical events artifacts come into being through causes. And, what is particularly fascinating about the study of material culture is how these artifacts can be examined in terms of the way they “present themselves” to us differently over time.

But do artifacts have the power to enchant us anymore?

Thinking I might try and write a post here that did not make mention of Heidegger, as I was jotting my thoughts down, I quickly realized how impossible that would have been –for on this topic, Heidegger is the real thinker who thinks. He thinks about artifacts intensely — and about how “things thing.”

How do “things thing?”

“Things thing” in a particular way for a particular human purpose. Things also can have a life of their own. Bronzes are the perfect example, really, for the same artifact could show up in very different ways depending on the culture–from religious symbol of the right to rule and mandate of heaven to becoming crucial vessels in state and family rituals; over time bronzes changed from being magical artifacts of power connecting one regime or great family vis-a-vis its charisma and virtue to a golden age in the past; to becoming mere museum piece and object of amusement and entertainment –if in a blockbuster exhibition, for example.

Chiang Kai-Shek went to extraordinary lengths to protect his control over bronzes and other artifacts for precisely this reason. They bestowed enormous power and prestige–connecting his regime back to the glorious Golden Ages of the past.

The destiny of objects.

Heidegger was very concerned with the fate of things. Throughout human history, things could be infused with magical properties and could hold great power to enchant. Standing at a kind of crossroads between physical form and human imagination–artifacts could draw together people in shared meaning and emanate a kind of cultural gravitas.

In today's world, however, things have become much as Heidegger predicted–everything has become some sort ofresource to be consumed and used. I wonder in a worldview that sees things as being throw-away (object for consumption) about the fate of objects of art, of craftsmanship and of enchantment. It does seem ironic that in no other time and place in history have people been so surrounded by things and material artifacts and yet the care and prestige surrounding artifacts seems to have disappeared completely. Rather than repairing something or keeping things as heirlooms, so much of everything has become throwaway. It seems somehow sad.

Human beings are, after all, creatures who live in playfulness (homo ludens) within narratives (Nietzsche's homo fingens). And artifacts play a crucial role in this, I think. So significant is our relationship to “things” that some historians of material culture even include unmodified natural objects in their scope of study to “understand better the relationship between the structure of human-made things and the structure of natural things in the physical universe in which we live” (see Lubar and Kingery).

In this way, my Beloved is also standing at a kind of crossroad between physical objects and human imagination as he looks deep into space at the light of galaxies and stars. To try and make the invisible visible –as he does– is an ancient occupation, after all.

To illuminate in enchantment….

What about the rest of us, though? Max Weber famously declared that The fate of our times is characterized by rationalization and intellectualization and, above all, by the disenchantment of the world. One wonders what artifacts, works of art, or physical objects have a similar power to exert control over our human imagination, and what imbues our world with a shared feeling of mystery, wonder; order and purpose?

Modern science along with poetry are perhaps more than anything else well-situated to restore our world with mystery and awe –and yet if even there everything becomes a mode of consumption and a means toward some end, I end up gloomily back here again with Heidegger's words that,

“Only a god can still save us”

For only through poetic thinking and discourse, can we prepare “for the appearance of the god or for the absence of the god during the decline; so that we do not, simply put, die meaningless deaths, but that when we decline, we decline in the face of the absent god.”

See: The Re-Enchantment of the World: Secular Magic in a Rational Age

For more: Ai Weiwei and “das ding” and Stillness of a Chinese Jar