Ending her dance naked at his feet, the king tells her she can have anything her heart desires.

Salome doesn't even need to think about it–for she already knows what she wants.

King Herod, mad with love for her, asks if she wouldn't prefer jewels and half his kingdom instead. But Salome stands firm. And so the king has no choice but to deliver the head of John the Baptist on a silver tray.

Oscar Wilde's version of the story, while at first banned in England, was immediately popular in Japan in the late Meiji and early Taisho periods. One of Japan's most famous modern poets, Takamura Kotaro, even included the Wilde version of the story in one of his early poems, Awakening on Winter Mornings (冬の朝のめざめ):

Wilde was not the first—nor the last— artist to be fascinated by this idea of a woman gone so mad in love with John that she prefers to see him dead than to live with the thought that he did not love her. Strauss' opera ends with her passionately kissing the lips of his disembodied head in what must be one of the most badass moments in opera history.

And what then became of his beautiful head?

Entwined with the history of Jerusalem, some have claimed that his head was interred in Herod's palace- a city whose history is itself so gruesome and grisly that the story of Salome is but a mere blip.

A few years ago, I was in Shanghai to participate in a conference held on cities and identity at Jiaotong University. I was there presenting a paper on Tokyo– a city in which I lived throughout my twenties and a place I love very much. Something strange happened to me as I was writing the paper, though. The more I read and wrote about Tokyo, the more I kept thinking and dreaming of Jerusalem–until I began to wonder if any two cities could be as different as these two?

Simon Sebag-Montefiore, in his fabulous biography of the city declares that great cities have great foundation stories—but what of Tokyo? Known as a city of villages at the edge of the world, Tokyo, it could be said, never acquired the religious gravitas of Jerusalem nor the moral compass of Rome. Neither eternal like Kyoto nor celestial like Jerusalem, Tokyo never took center stage at all. Of course, I think Tokyo is one of the great world cities. But Tokyo lacks the civic resonance of most great cities. While Jerusalem was said to be the navel of Christ; Mecca the center of the world and New York City, center of the universe—Tokyo has always been at the edge of things. A self-proclaimed frontier town of samurai and salarymen, it is a city without a plan.

I love Tokyo–but it is no “holy city.” 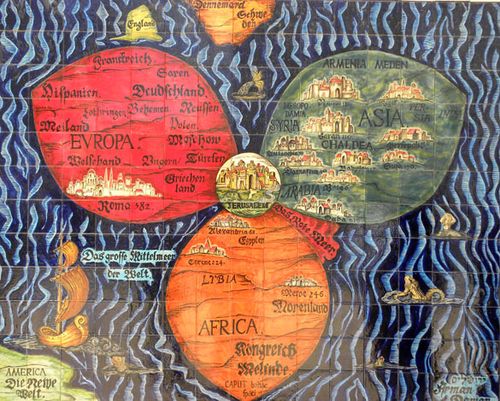 Known in Arabic as Al-Quds, Jerusalem's name in Arabic refers to its holiness. Holy to three religions, over the long stretch of time, it must have the most tangled and bloody history of any city on earth. Considered by many in the middle ages to be the center of the world, aspirations about the city launched the crusades and countless ocean voyages in search of “Christians and Spices.” Sebag-Montefiore goes so far as to say the history of Jerusalem is the history of the world.

So, where does one even begin to write about such a place? Approaching the city vis-a-vis religion, Avner de-Shalit, in his chapter to the Spirit of Cities, calls the city: the “City of Religion.” Karen Armstrong, likewise, centers her book on Jerusalem on the theme of sacred geography. This is no city of science, and so religion is perhaps the most logical place to begin any meditation on the place. Both holy and harlot, Sebag-Montefiore says, “Jerusalem is the house of the one God, the capital of two peoples, the temple of three religions and she is the only city to exist twice — in heaven and on earth.”

Being so full of history and mythological significance, maps of the city traditionally were not grounded in physical reality at all–for this city transcended physical reality. It was a spiritual location –and existed both in heaven and on earth.

Karen Armstrong's book on the city revolves around this notion of spiritual geography, as she believes that the human propensity to assign special meaning to certain places is as old as humanity itself. She says:

People have developed what has been called a sacred geography that has nothing to do with a scientific map of the world but which charts their interior life. Earthly cities, groves, and mountains have become symbols of this spirituality, which is so omnipresent that it seems to answer a profound human need, whatever our beliefs about “God” or the supernatural.

Tying this to ways in which humans give meaning to their mundane lives, she reminds us the way the apprehension of the sacred used to be regarded as of crucial importance. Having been raised in LA and spending my adult life in Tokyo, the more I thought of all this, the more I realized how utterly ill-equipped I am to really understand the concept of a holy city–but at the same time, I must admit, I also grew ever more fascinated and so suggested to the conference organizers that we really ought to organize a second conference on holy cities.

In order to make my case, I noted some of the cities around the world which were thought to be holy. There were not that many. There were a few I could come up with which are considered to be good places in which to die, or cities of pilgrimage. But even those cities were not all that numerous. And surely there is no other city that I know of which has been thought to exist both in heaven and earth. Are there not countless Jerusalems, Zions and Cities upon a Hill?

The future of the world depends on the future of cities. And this must include holy cities, which probably have the most painful histories of all. That said, probably no one will be surprised that my holy cities conference idea was shot down. Still, returning to Los Angeles, my fascination and desire to see Jerusalem only deepened–and at last, it looks like I am finally going to see this place of my dreams–for next month, my astronomer and I will be heading to Jerusalem. And I am so curious about how the actual city will compare to this city or religion of my imagination.

This is not the first obsession I have had with a place. As a child, I had a strong fascination with Kashmir and was absolutely obsessed with seeing it. It started when I was 12, and I read and dreamt of seeing it for my entire teenage years. At last traveling there as an adult of 20, I found Kashmir to be every bit as wondrous and romantic as I had imagined. I wonder of this time won't be the same? Though I guess I am a lot older now and maybe not so prone to falling in love with places like when I was a girl.

In his essay on the city, de-Shalit wrote evocatively about people going mad in Jerusalem. Known as Jerusalem Syndrome, it reminds me a bit of the reaction pilgrims have to relics, like believers who once tried to bite off bits of the True Cross. Considered one of the top ten relics, the head of John the Baptist was like a Holy Grail for some. The relics associated with the Saint are among the most important in all of Christendom.

Perhaps nothing gets closer to my own feelings about the history of Jerusalem like the story of Salome. My Palestinian friend G reminds me to remember that “believers lived in peace in Jerusalem for centuries.” But reading history books Jerusalem, it seems as if there was hardly anything else but grislly bloodletting and religious fanatics and nutters. De-Shalit calls it “a serious place.” Serious and intense, I agree with Armstrong that there is a deep longing and pain associated with the desire for a kind of reconciliation that is at the heart of devotion to a holy place.

Like so many people, I suppose I also have a deep longing and pain for this place. And maybe like the unendingly fascinating scene from the opera depicted above, in which the artist re-imagines what the Bible has written (for of course only a woman deeply in love with a man could wish for his head to be cut off and presented to her on a silver platter), I cannot help but imagine that traveling there will feel somehow like that all-too human moment of arriving as when Salome pressed her lips against the cold and decapitated lips of her beloved John the Baptist.

For more on cities: my Lost in Sector 17 (Chandigarh) and Asher Kohn's Shura City.