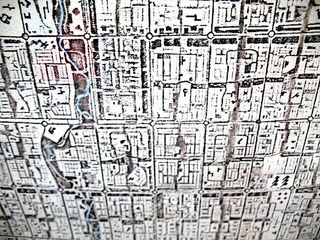 Each somehow singular, that cities have their own distinct and discrete smells, weather, feeling, music and mood is something immediately discernible to anyone who travels around the cities of India; of Southeast Asia; of Europe where –despite close proximity, the cultures/spirits/aurae/airs/colors– are so incredibly and beautifully different. Smells especially can so vividly evoke–or even “capture”– the spirit of a city; so that, as Darwish goes on to say, A city that cannot be known by its smell is unreliable.

So what of Indian cities? For me, Srinagar was perfumy: floral from flowers in bloom in gardens scattered around the city. But also it was the smell of sewage coming from the lake. Cardamom and spicy Kashmiri chai too. Delhi back then smelled sweet from the burning dung fires; smelled of exhaust too–even way back then. Shimla was freshly baked bread and heavenly deodar forests.

I still regret not making it to Lahore –for it must have been the most fragrant city of all. “Pearl of the Punjab” and “Paris of the East”–what does a nation do upon losing a city so perfumed in history as that one?

I just read an interesting essay by Vinayak Bharne called, “Anointed Cities.” It's such a great title, and the essay illuminates in just a few short pages something that is in many ways perhaps unique to the sub-continent. Typically, when we look at the history of cities, we find that they come into being for two main reasons: either for commercial reasons as place for trade (this was particularly so of the earliest ancient cities) or for political or even geopolitical reasons, as places for kings to better hold power. This is no different in India, but according to Bharne, India also has a history whereby small, wayside places of worship became the impetues for urbanization.

Of course, all great cities have great foundation stories, but Bharne is not talking about the mythology of cities, but rather the reasons behind their origins and impetus of urbanization. He uses the ancient city of Madurai as his main example, tracing its history back to just such a wayside place of worship (very often at sacred spots associated with trees or large rocks). He then goes on to suggest that there are many urban areas dotting India which have similar histories, whereby people began gathering in these places– not to trade but to worship. He calls these the faith-scapes of India and says that:

“Today's trees and shrines will become tomorrow's centers and monuments, for in them are the hopes and spiritual aspirations of the millions of underserved that are as much a part of the Indian city as anyone else. They need to identified accepted and celebrated as essential elements of the Indian urban landscape.”

India, of course, has all kinds of cities. For in addition to its many “holy” cities, it also has great imperial cities and modern cities. And, it even has a city designed and planned by the great French architect Le Corbusier. Chandigargh was–most people agree– his masterpiece. A completely planned city (India's first), it would become “the jewel” to replace Lahore and to serve as the new capital of the Punjab.

Birth of a nation and birth of a city— Chandigarh was Nehru's baby, and he hoped it would become “a new city of free India, totally fresh and wholly responsive to the aspirations of the future generations of this great country.” Nehru first had asked American Albert Mayer and Polish architect Matthew Novicki to create his new capital of the Punjab. But following Novicki's sudden death and Mayer's subsequent hesitation, the project fell in the hands of Le Corbusier, who signed on around Christmas 1950.

Chandigarh's Le Corbusier, by Vikramaditya Prakash, beautifully re-tells the story of the friendship between these two men–Nehru and le Corbusier– and of their conflicting notions of “the modern.” I highly recommend this book. Despite very different notions of “what is modern,” somehow the friendship of these two remarkable men survived and this amazing city was built.

It seems like a million years ago now, but I arrived in Chandigarh in the summer of 1990 from Delhi, en route to Shimla. And, I was immediately unnerved by it. The city was quite simply utterly unlike anything I had ever seen before–not just in India but anywhere. My first impression was of a future city after the apocalypse. Or maybe an alien cityscape. In a sense, it appeared to me as a kind of ruins one comes upon in a jungle somewhere. I think that feeling was partly because this was not that long after the incident at the Golden Temple, so Chandigarh had a neglected and untended feeling–at the same time things were really “locked down.” There was barbed wire and you couldn't get close to certain governmental buildings. 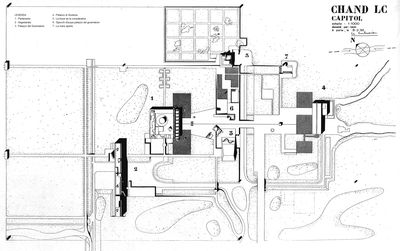 I suppose part of my negative reaction was that I've always simply preferred more organic cities. One of the things I have always loved about Asian cities is the comparative lack of zoning, which enables these places to be truly walking cities, and in my opinion this is why they are so much more vibrant. Where I lived in Japan, for example, everything was in walking distance as hospitals, houses (of all price categories), shops, and restaurants were all jumbled centering around the train station. For me, it's the only way to live.

In contrast, Corbusier's Chandigarh is a city planned from scratch (some say designed in just four days!?) Extremely abstract and geometric, the city has 47 self-contained zones. Le Corbusier conceived his master plan of Chandigarh as being analogous to the human body, with a head at the top (the Capitol Complex, Sector 1), and the industrial and educational as limbs to each side. The body had lungs in the form of its gardens and green sectors. There were transportation “arteries” separated and categorized by function (pedestrian and vehicular traffic into seven different road types); with the heart of the city being its commercial center located in sector 17.

For what it's worth, I spent most of my time lost in sector 17.

For much the same reason as Chandigarh, Islamabad is also a city planned totally from scratch by a famous European architect, who was called upon to design the new capital city of Pakistan with very little input from the population. Like Chandigarh, it was created out of the grand dreams of its planners and remains comparatively wealthier and safer than many of the other cities in the region. Tentatively, I think one could say that both cities were successful in their aims. And, Chandigarh, it needs to be said, was conceived for the people. Imposed from up high, and yet, unlike say in Lutyen's New Delhi, this was not a city planned for domination of the population by a colonial government (or a native one) but rather, Corbusier's dream was more pastoral and saw the people as being the heart of the city (and he therefore positioned the commercial/amusement sector in the center).

While Chandigarh may not have been my cup of tea (and indeed, I wouldn't know it by any smell), still it is one of the world's truly unforgettable places. A unique part of India's national heritage– indeed, it is a world treasure that should be preserved.

I love cities. Of course, nowadays, it's where the majority of the world's population lives. Emphasizing the local, I think more focus on cities would serve to counter-balance the overwhelming dominance of nation-states today. Also, as we know, people continue to flock to cities, and it will be in cities that we will improve things environmentally—or not. As evolutionary biologist Mark Pagel has written:

Now over half the world lives in [cities]. But why given that cities have historically been targets of attack and places of crime and where diseases fester and spread? The answer is that cities have acted as gardens of our prosperity, creativity and innovations and their continued existence is vital to fitting the projected 9 billion people onto this planet. Surprisingly, they are the new 'green centres' of the world.

I think this is true and recently was surprised to come across a comment on Catholic site Vox Nova on a post about aiming to live more peacefully, in which the poster suggested:

Here’s the simplest thing you could do to accomplish your desire, if you have not already done it. Move into the city. Leave the suburbs, and the need to drive everywhere. AS a confirmed city lover for all of my life, i think that is the basis of a less complicated and more peaceful existence. In other words, if you still live in a suburb, there is no point.

This really reverberated with me. As a great lover of cities (and someone who loathes American-style suburbs), I think more and more focus (and political wherewithal) needs to be placed there. For it is there, where we can make the changes that could be the most transformative.

**For more on planned cities, please see my post on the Shah-al-Shura and Masdar city plans.

Save Chandigarh! Great video here (issue of looting begins around 10:00~).