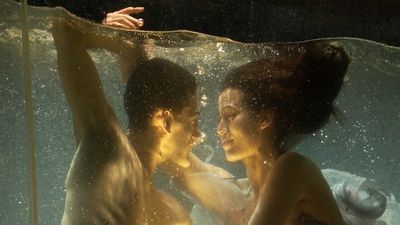 The ancients told us that it was the heart that mattered. Thinking too much, they warned, will only give you a headache. And this fact was backed up by the finest research of Medieval physicians and theologians. Aristotelian philosophy had imparted to the Medievals that the heart was hot and dry– often times burning hot; and that intelligence, emotion, and passion all originated there, in that heat. Ibn Arabi further refined this by adding that, if the mind thinks (考), then heart imagines （思・想).

We find ourselves back in a time when heart and imagination took center stage–and love was thought to move the stars and the heavens above.

Not surprisingly, it was a time when lovesickness was the most common form of heart disease. A veiled glimpse ignites a fire causing two people to circle each other as Lover desires Beloved; each seeking to know the Other. This all being something which took place within the topography of the heart itself. It was something imagined– over weeks upon weeks; months upon months. Imagined as “'spirits take bodies and bodies become spirits' something so powerful that European physicians of the Middle Ages declared that, if one wasn’t careful, lovesickness could lead a person into madness (see Averroes' study of love as affliction, for example).

13th and 14th century scholars talked about something known to them as visual species. These were defined as “objects” (propogated through the air) that mediated between the physical and imaginal world by imprinting themselves on a person's imaginaton from a distance. It was the image as held in the body that caused the troublesome– and sometimes dangerous– overheating of the bood around the heart.

To pursue the logic of all this, because the “visual species” that caused desire and lovesickness were things originating outside the person, it followed that magic could also generate new species. And this is why love charms, amulets and the use of magical incantations in maters of love became fairly common. For romantic success, men were encouraged to write “pax + pix + abyra + syth + samasic” on a hazel stick and hit a woman with it three times on the head, then quicky kiss her; while Tristan and Iseult were undone by a love potion which they accidentally drank. People reported that like the other magical incantation– abbracadbra— that just whispering the words out loud “I-love-you” had the power to move mountains. It even had the power to cure gout–or maybe that was abbracadabra?

I told him that I wanted to employ a famous Medieval love charm at our wedding. Not surprising, the Eucharistic host played many different roles in various Medieval love potions. But my favorite was perhaps the simplest– a lady would slip the host under her tongue. Then, kissing her beloved with the host still in her mouth, she would ensure that he would love her forever.

He dismissed my plans, saying, he already knew he would love me forever so I didn't need to go through so much trouble.

I wonder, though, is the heart that knowable? 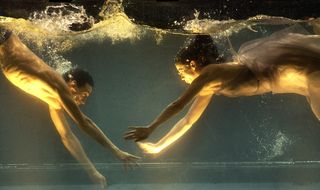 For in addition to its wondrous heat, the Medieval heart was also believed to be extremely porous–something which inextricably connected inner with outer (and outer and inner). Heather Webb explains it thus:

It was thought that the air we breathed mixed with the blood in our hearts to form generative spirits that, sent back into the world, connected us to one another and to the greater circulating universe. According to the Aristotelian and Aquinian theory, the heart should imperfectly mimic the circulations of the heavens”

Through our breath, then, and our persistently beating hearts, we are connected to the world around us. One breathes in landscape, atmosphere and social context and breathes out heart and poetry. The heart doesn't so much have a mind –or reasons– of its own as it is simply busy breathing. Vulnerable to magical charms and prone to dangerously overheating, who can predict what the heart will say next? It is surely the ficklest of organs that takes us most by surprise?

Remember when Dante saw Beatrice that day on the bridge in Florence?

Out to buy figs, young Dante was in a rush to arrive at the market. As he walked, he happily imagined the pleasures that awaited him: the smell of Sicilian lemons; of sweet sugar from Egypt; of perfumed vinegars and syrups made from grapes. Cherries, endives, oranges, spicy sausage; dried fruit, dried fish, mint, orange blossoms and roses. Just thinking about the perfume of these things caused him to quicken his pace. And, turning the corner to the lively street that followed the great River Arno, he spotted her.

It had been precisely nine years since the first time he had caught glimpse of her, at a time when they had both still been only children. But he recognized her in an instant.

Then, as she approached him– not surprising, given the story- their eyes locked. And as a thousand birds took flight in his heart, the man stood there barely breathing. Time stopped. Breath quickened and he let out an amorous sigh (溜息→感嘆).

…sweetness to the heart
and
A suave spirit full of love
That straight to the soul,
Saying: “Sigh” (Tanto Gentile)

Too quickly, however, Beatrice's friend, with whom she had been walking arm-in-arm, urged her to continue walking, and so Beatrice– with just the most perfunctory greetings to her beloved– walked away from him. Dante, in a dream later that night, saw the God of Love, who commanded him: Vide cor tuum: Look upon your heart.

And so in this way, they circled each other. This, despite the fact that they would never meet again, they would revolve around each other– like planets circling the sun; like dervishes circling God. In love, there is a great desire to be known by the Beloved. Just in the same way that the Beloved seeks to know the soul that he feels belongs to him. As the poets insist, true love is a great mirror reflecting one's soul at the same time reflecting the soul of the Beloved in unio mystica.

All of this being part of a playful game of hide-and-seek that God plays with Himself, says the hindu and sufi mystics. Perhaps no one in history worked out a theory for this like Ibn Arabi. Indeed, his theories on divine love made him famous throughout the Islamic world. Born 100 years before Dante, scholars posit that it was Ibn Arabi's poetry and philosophy which would inspire, illuminate and be reborn within Dante's poetry of Beatrice. Beatrice's Body. Beatrice's soul.

Stranger things have happened, I am sure you will agree. Ibn Arabi's theories of love became a dialectic of love, characterized by angel's wings and planets circling the sun (both images rich in Dante's poetry). Desire transfigured by imagination– imagination, says Arabi– being the function of the heart. In Plato's Phaedrus, Socrates explains that the symptoms of lovesickness –the sweating, fever, and physical over-heating are facts signifying the growth of the soul's wings– taking the soul back to its original winged state. And this is expressed in poetry. In the form of heavenly angels,their wings beating in desire, they leave feathers behind in bed. For C.

Images from Dido and Aeneas, by Sasha Waltz

Diana Vishneva: Beauty in Motion Below