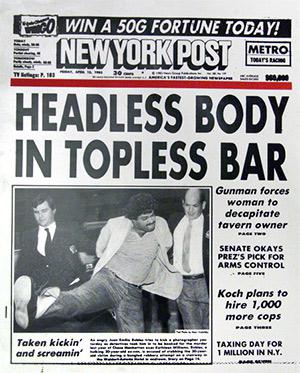 When I was growing up during the 1970s, America still had a vibrant and thriving newspaper culture. My hometown New York City boasted a half-dozen dailies to choose from, plus countless neighborhood newspapers. Me and other kids started reading newspapers in about the 5th grade. Sports sections, comics, and movie listings mostly, but still. By middle school, newspapers were all over the place, and not because teachers foisted them upon us, but because kids picked them up on the way to school and read them.

Of course when dropping coins at the local newsstands and into boxes, us youngsters typically picked up tabloids such as the New York Post and Daily News, not those fancy papers so big you had to unfold them just to see the entire front page: the New York Times and the indecipherable Wall Street Journal. Those were for adults, and usually white collar ones at that.

My father was blue collar and not a big newspaper reader. But my mother was a high school English teacher and she made a family ritual of going out to buy the massive Sunday Times when it first hit newsstands on Saturday evenings. Mostly she just wanted the Book Review. We’d also pick up a Daily News because they too had a formidable Sunday edition; not cut into sections like the Times, but in a single massive tome like a phonebook. It had the best comics section of any NYC paper. After my sister and I had our way with the News, I’d occasionally thumb through the Times. No comics, but they did have an entire sports section.

As I rambled towards adulthood, I continued buying the tabloids for their local sports coverage and hilarious front page headlines. However, I also found myself reading more of that Sunday Times. Never all of it, of course. I was far too young, and anyway, never trust anyone who does; no one’s interests are really that far ranging. END_OF_DOCUMENT_TOKEN_TO_BE_REPLACED