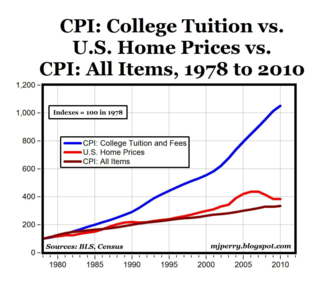 American colleges have undergone substantial changes during the last three decades. Rising tuition costs, which have far outpaced the rate of inflation, are nearly universal. Other changes that have affected most schools include a tremendous growth in non-instructional areas and a serious re-shuffling of labor. Many schools have added layers of administration; seen their rosters of administrators substantially enlarged; and spent millions of dollars on non-instructional construction such as recreation centers, student unions, and administrative buildings. Meanwhile, the ranks of college teachers have shifted from tenured and tenure track (TTT) professors to predominantly contingent faculty (ie. non-tenure track) that falls into two broad groups: part-time labor (adjuncts and graduate students) and full time labor (mostly lecturers and visiting faculty).

There are, of course, many causes and explanations for these wide ranging changes, as well as varying degrees of change among America's hundreds of colleges. For example, private colleges are generally less dependent on public largess, though many of them do in fact receive public subsidies from federal, state, and even local governments. Meanwhile, the public colleges that rely more heavily on public spending face different circumstances depending on which of the fifty states they are part of, all of which have different budgets and policies for supporting higher education. In some states there has been extreme volatility in funding while some have been more stable, though in almost all states the share of public college budgets supplied by state governments has declined. This has led most public schools to not only raise tuition rates, but to also seek substantial revenue from fund raising, which runs the gamut from alumni contributions, to naming rights of campus buildings, to exclusive contracts with junk food venders. For example, many schools have cut deals with either Pepsi Co. or Coca Cola, Inc. granting one or the other head of this corporate duopoly exclusive rights to sell beverages on their campus.

Amid all these changes, most TTT college professors are alarmed at the decline of their cohort, less for selfish reasons (they are secure, or will be once they earn tenure), but more because it is a degradation of higher education. The creation of a two-tiered labor system, with a minority of TTT professors and a majority of contingent faculty, is patently exploitative and an affront to the values of higher education.