By Namit Arora Homer’s Iliad is the story of an epic war between the Greeks and the Trojans. The apparent cause of the war was the ‘abduction’ of Helen by Paris—Helen was the wife of Menelaus, king of Sparta; Paris was the son of Priam, king of Troy. Menelaus, his pride wounded, called on other… By Namit Arora Public corruption is often defined as the misuse of public office for private gain. It tends to thrive when discretionary power is vested in officials amid a weak architecture of deterrence. A persistent feature of all societies, public corruption is today considered a problem of the developing world. Examples include politicians, bureaucrats,… By Namit Arora With Syria in the news, I’ve dusted off an account I wrote a few months after my visit there in Feb 2001. I’ve also created an 8-min video from my archives, using music by Fairuz for soundtrack. While I look at contemporary Syrian society and politics, the bulk of my narrative is… By Namit Arora [I somehow managed to write a 3,500-word essay on Trinidad without mentioning cricket, rum, or the steelpan. Can I be forgiven for that?] In April this year, I visited the Indian Caribbean museum near the town of Chaguanas in Trinidad. Set in a large hall, the museum had no other visitors. Its…

By Namit Arora Grande Riviere, a tiny village on the northeastern coast of Trinidad, is one of the few beaches in the world where the leatherback turtle comes to nest. It lies near the end of a serpentine road that hugs the palm-fringed Atlantic coast for miles, then cuts through the lush rainforest of the… By Namit Arora I often think of the good life I have. By most common measures—say, type of work, income, health, leisure, and social status—I’m doing well. Despite the adage, ‘call no man happy until he is dead’, I wonder no less often: How much of my good life do I really deserve? Why me… by Namit Arora On English in India and the linguistic hierarchies of colonized minds (NB: an updated version of this essay is here.) The modern era of European colonialism began in the Americas with bands of adventurers seeking El Dorado. Their early intrusions evolved into predatory monopolies like the East India Company and European states… By Namit Arora (An excerpt from a longer work of fiction.) It has been a month since they first slept together. He wondered why their verbal sparring had increased in recent days. Just this morning at her place, Liz set off on the youth-obsessed American culture and the skinny ideals of female beauty manufactured by… By Namit Arora In December 2005, I took a bus out of the coastal city of Vijayawada in South India. Heading west, I passed small towns and villages whose names—opaque to me because written only in Telugu—I kept guessing at from a map. After years of regional drought, the monsoon had been bountiful this year.… By Namit Arora Shortly before the appalling ‘Shock and Awe’ attack on Iraq, and for years after, public support for the war was high in the U.S.[1] It was evident in the high approval ratings for Bush, who had hoped that the war would turn him into a great president and American hero. As if… By Namit Arora An early goal of British imperialists in India was to create a class of local elites in their own image. They would be, wrote Thomas Macaulay, ‘interpreters between us and the millions whom we govern; a class of persons Indian in blood and colour, but English in tastes, in opinions, in morals…

By Namit Arora Why did democracy take root in India against all odds? What are its distinguishing features? What should we make of its attempts to combat inequalities among its people, especially via reservations? Over six decades later, how close is it to Ambedkar's inspiring vision of democracy? The Republic of India began life as… By Namit Arora (An excerpt from a novel in progress.) On their way to China Town, they pass an area with red curtained massage parlors and hookers pacing the streets. They stop at a red light behind a BMW. A hooker approaches its curbside window, talks to the driver, and hops in. Ved notices Liz… By Namit Arora A review of a memoir by an ‘untouchable’ starting in the 1950s in rural Uttar Pradesh, India. (This review won the top award in the 3 Quarks Daily 2011 Arts & Literature Contest. Read more about it here.) I grew up in the central Indian city of Gwalior until I left home… 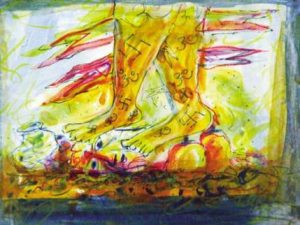 By Namit Arora An egalitarian ethos has not been a prominent feature of Indian civilization for at least a thousand years, when Buddhism began losing ground in South Asia. The dominant Hindu sensibility has long held that all men are created unequal, constituting not one but many moral communities, and possess varying natural rights and…

Muslims discovered Greek thought hundreds of years before the Western Christians, yet it was the latter who eventually domesticated it. Why did the reverse not happen? Why did the golden age of Islam (roughly 9th-12th centuries)—led by luminaries such as al-Kindi, al-Farabi, Alhazen, al-Beruni, Omar Khayyam, Avicenna, and Averroës—wither away? Despite a terrific start, why did rationalism fail to ignite more widely in Islam? In this epilogue, I’ll survey some answers that have been offered by historians and highlight one that I consider the most significant.

Sufism, or Islamic mysticism, first arose in Syria and Iraq in the eight century CE. Arab conquerors, a century earlier, had taken Islam all over the Near East, which included lands with a long tradition of ascetic thought and eastern Christian monasticism—a tradition that valued religious poverty, contempt for worldly pleasures, and a secret world of virtue beyond that of obedience to law—no doubt encouraged by the fact that for three centuries, until after the conversion of Constantine to Christianity, Christians in the Near East were a minority subject to suspicion and persecution by the pagan Romans.

Islamic scholars during the golden age of Islam (roughly 9th-12th centuries) widely referred to Aristotle as the ‘First Teacher,’ evidence of the high regard in which they held the ancient Greek philosopher. The man ranked by them as second only to Aristotle was a tenth-century Muslim thinker by the name of Abu Nasr al-Farabi (870-950 CE). [1] Perhaps a good way to illustrate the rational current of early Islam is through the life and times of this important thinker.

By Namit Arora Part 1: The Rise of Islam (This five-part series on early Islamic history begins with the rise of Islam, shifts to its golden age, examines two key currents of early Islamic thought—rationalism and Sufi mysticism—and concludes with an epilogue. It builds on precursor essays I wrote at Stanford’s Green Library during a…