This summer Kevin Knudson and Evelyn Lamb started a podcast called "My Favorite Theorem". In it, they interview a mathematician and get them to geek out about their favorite mathematical result. Like "The Best Thing I Ever Ate" on the Food Network, but with less butter and more math.

This month here at 3QD I thought I'd share my favorite theorem. There are lots of amazing math results I get to work with every day in my teaching and research, but there is one which warms my heart above all others: the Intermediate Value Theorem (IVT) from calculus. As we'll see, it's easy to grasp, has remarkable and surprising implications even in the real world, and foreshadows some really cool results from elsewhere in math.

The IVT tells us about continuous functions. A function, you'll recall, is a rule which takes in one (or more) input numbers and spits out one (or more) output numbers. A first example is f(x)=x2+1. It takes in a single number and squares it and then adds 1. The result is the output. If you plug in 2 you get out 5, and if you plug in 4 you get out 17. If you plot all the pairs of inputs and outputs as x's and y's, you get the graph of your function.

A continuous function is a function in which the outputs are close together whenever the inputs are sufficiently close together. Said differently, there are no sudden jumps, breaks, or dramatic changes in outputs as you change from one input to another. Many, many, many functions in real life are continuous. If you press down slightly on a gas pedal, the car doesn't jump into warp speed, it slowly accelerates. If you slowly travel across the Gulf, the surface temperature also slowly changes. Same with the population of a bacteria if you slowly vary the temperature.

Of course, not everything varies in a continuous way. Taxes are usually done in whole dollars (at least in the US) and there are various tax brackets and other rules which come into play. You could earn a penny more and suddenly owe an entire dollar more in tax. The prices of stocks on Wall Street are even more dramatically non-continuous. If bad news about a company is announced, a stock can drop by a huge amount from one moment to the next. Even in the natural world you can have non-continuous phenomena at the extremes. A sudden phase change in a material as it is slowly warmed, or crossing the event horizon of a black hole.

But almost every function you see in everyday life is continuous. Even though it is so simple as to be ridiculous, the IVT tells us remarkable things about continuous functions.

If you know that your function is continuous and you know that y and z are outputs of your function, then the IVT tells us that every other number between y and z must also be an output of the function. That is, since our function doesn't make any sudden jumps, there is no way for it to get from y to z without traversing all the numbers in between. Said this way, the IVT seems so obvious that there's no way tell us anything useful. 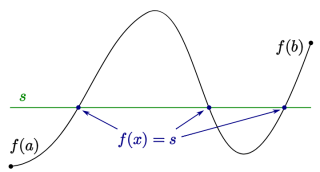 To put it in a formula, if f(x) is a continuous function and x=a and x=b are two inputs, then no matter which number, s, you pick, if it lies between f(a) and f(b), then there is a c between a and b such that f(c)=s. That is, you can't get from f(a) to f(b) without crossing the green line at s.

Duh, right? But the IVT implies all sorts of amazing facts!

Right at this moment, there are two points on the equator which are antipodal to each other and have the exact same temperature! How does the IVT tell us this? The first thing to notice is that as we travel along the equator, the surface temperature varies continuously. A temperature doesn't jump from 45 to 50 degrees from one spot to the next.

A practical application of the IVT is the fact a wobbly cafe table is often fixed by rotating it. A wobble means one leg is too high relative to the ground, but assuming the unevenness of the floor is continuous, a 180° turn would make that leg too low. Somewhere in between must be a spot where it is exactly right!

A close relative to the IVT is the Extreme Value Theorem (EVT). It, too, talks about continuous functions. It tells us that every continuous function must have a largest possible output. It guarantees that there is an optimal temperature for growing your orchids. They do slightly better or worse as the temperature varies and, obviously, won't do well if it's too cold or too hot. But the EVT ensures that there a perfect temperature somewhere in between which gives the best possible result! 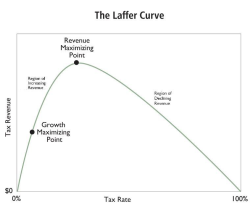 However, like a chainsaw, the IVT and EVT are dangerous in careless hands. A classic example – much loved by supply-side economists – is the Laffer Curve. It's the function where the input is the tax rate and the output is the total tax revenue received by the government. Of course, if the tax rate is zero, then the total revenue is zero. And if the tax rate is 100%, then nobody has an incentive to work and, once again, the total revenue is zero. By the EVT, there must be an optimal tax rate somewhere in the middle which maximizes the government's revenue.

Somehow, Laffarians always seem to think we're on the right side of this peak and still need to cut taxes (those mythical tax cuts which will pay for themselves). And somehow maximizing government revenue doesn't seem to be the real goal…

The real problem, though, is that there is no reason to believe that the tax rates –> government revenue function is continuous! Heck, it's probably not even a function at all! There is no reason to think that tax revenue responds to tax rates in a predictable fashion. In his last column for Scientific American, “The Laffer curve and other laughs in current economics”, Martin Gardner drew a more accurate version of the Laffer Curve: 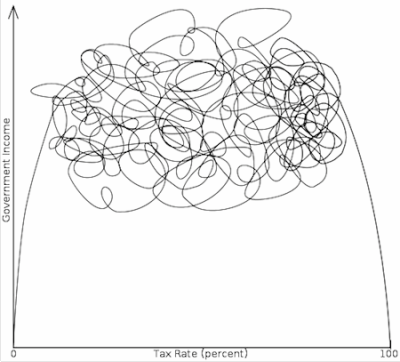 Another great application of the IVT is that it guarantees fixed points. A fixed point is an input which is unchanged by the function and returned back again as the output. For example, for the function f(x)=x2, x=1 is a fixed point. If you plug 1 in, you get 1 back as an output. As we've seen at 3QD, studying when a function repeats itself is a very interesting corner of mathematics.

This points us to the wonderful Brouwer Fixed Point Theorem (BFPT). The BFPT says that if f(x) is a continuous function which has both inputs and outputs lying in a disk, then it must have a fixed point. For example, it guarantees that if you take a tablecloth off of your dining room table, crumple it up however you like, and set down the wadded ball on your table, there is a point in the wadded up tablecloth directly above the spot on the table where it was at the beginning. It also tells us that if you take a map of Europe, crumple it up into a ball and set it on the ground in Brixen, then there is a point on the map directly above the corresponding point on the ground.

The BFPT works for disks of all dimensions. This includes the 1-dimensional disk (a line segment), which is our friend the IVT. But it also includes 3-dimensions and higher. And just like the IVT, it is a flexible theorem which doesn't literally require disks to work. As long as the function is continuous, the BFPT works like charm. For example, it tells us that no matter how much we swirl the wine around in a closed bottle, there will be a molecule of wine in the same place as when we started. 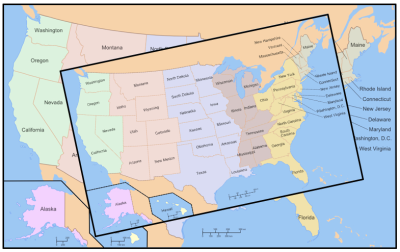 [1] Of course, a similar argument can also be made if your favorite spot happens to be colder than its antipodal point.