In June here at 3QD we talked about Arrow's Impossibility Theorem. The short version is this: a dictatorship is the only voting system which satisfies a few sensible ground rules. Or, to put it another way, even on an island with only two people, any form of democracy can lead to absurd outcomes [1].

Arrow's theorem warns us that there are flaws in every form of democracy. It should also spur us to think deeply about the potential consequences of how we choose to vote. As Donald Saari, an expert on math and voting, put it:

…rather than reﬂecting the views of the voters, it is entirely possible for an election outcome to more accurately reﬂect the choice of an election procedure.

That is, how you decide to count votes can have a bigger impact than the votes themselves. Stalin made the same point rather more ominously:

I consider it completely unimportant who in the party will vote, or how; but what is extraordinarily important is this—who will count the votes, and how.

This is not just a theoretical worry.

Here is an example close to the hearts of those of us here at the University of Oklahoma. In 2008 Sam Bradford, the OU quarterback at the time, won the Heisman trophy. According to the Heisman voting rules, each voter choses a first, second, and third place candidate with first place votes worth 3 points, second place 2 points, and third place 1 point. The candidate with the most points, wins. Let's look at the voting data for that year’s Heisman troops (taken from here):

Each way of scoring votes is a reasonable and defendable method. But in choosing how to count the votes we are deciding the outcome. Exactly how malleable is this election? For example, if we give A points for first place votes, B points for second place votes, and C votes for third place votes, under the obvious restriction that we should have A ≥ B ≥ C, can we choose values for A, B, and C so that Colt McCoy wins the Heisman trophy? That's a great puzzle which can be solved with a bit of algebra. I'll leave it to you to figure out if a devious Longhorn fan could have thrown the Heisman to McCoy.

The elephant in the room, of course, is the looming US elections. They are run according to the “first past the post” rule: each person gets to vote for one candidate per office and the candidate with the most votes, wins. It's not hard to see that this voting system tends toward having two big parties. It is a kind of Darwinian survival of the fittest: when you can you try and draw voters away from your competitors and to your side (see: Reagan Democrats, Bill Clinton's “triangulation,” Tony Blair's “third way,” Hillary Clinton's tack to the left to pull in Sanders's supporters, etc.). Parties who can't or won't play this game slowly starve themselves and shrink down to the core who won't be wooed under any circumstances. The political scientists call this Duverger's Law.

And, of course, with size comes market dominance: the biggest parties use their power to prevent the rise of competitors by redistricting, controlling access to debates, to the ballot, etc. It's nothing less than a good ol' fashioned oligopoly. Here in Oklahoma the Democratic party is a withered shell. Without a credible opposition our politicians see no need to do a proper job of running the state. Last week I was embarrassed to discover that one of our senators is up for reelection this year. I haven't seen a single political ad [2], lawn sign, or other evidence that we'll soon be voting on one the most important offices of the state.

In the US as a whole there is enough diversity of opinion that neither party can hold a supermajority. There is also the countervailing force of people wanting to have a choice (or at least the feeling of a having a choice) which leads to having two parties rather than just one. It's Coke vs. Pepsi, Apple vs. Google, TI vs HP. When there are only two parties who have candidates with a chance to win, it is on them to provide candidates worthy of the job [3]. After all, with great power comes great responsibility. On this front the presidential election is catastrophic failure. The lineup offered up by the Republican party was a parade of horrors. They ranged from mediocre (Bush, Kasich) to terrible (Fiorina, Perry) to beyond my most feverish nightmares (most of the rest). If Trump's campaign has given you fond memories of what could have been, I recommend you remind yourself of how truly awful the rest were.

Democrats did marginally better in that they stayed in the mediocre to terrible part of the spectrum. Bernie Sanders can raise the roof, but was never a credible alternative to Clinton. Hillary Clinton seems to operate with the philosophy that what's good is whatever is good for Hillary. A recent article in the Economist gives a good summary of how her political and personal life is tangled beyond separation. A reasonable candidate on the other side (I have a soft spot for Jon Huntsman) would have had no trouble winning against Clinton. She's not the candidate I would have chosen, but at least she'll do a decent job of it.

I was appalled when it looked like it'd be Bush vs. Clinton, Round 2. Like we're living in sort of hereditary banana republic. Even though he's an obnoxious windbag and all around loser, I have to confess that I cheered on Trump in the early days. He is the court jester of the Republican side: daring to say out loud what the rest only whisper or whistle. For years the Republican Party has profited by obstruction, by blaming, and by making government failure a self-fulfilling prophecy. Trump simply beat them at their own game of making ridiculous promises and outrageous claims. Here is the Daily Show making the same point with their usual biting humor.

What is a voter to do in an election between Clinton and Trump? Because of our “first past the post” form of democracy, voters have a signaling problem. You get one and only one vote once every four years. That's a very narrow communication channel in which to express your will. We have to make the best of it.

First, it is imperative that Trump lose and lose big. If he comes even vaguely close to winning he'll only encourage copycats. Even if Clinton isn't your candidate of choice, she'll do a decent job and is better than the alternative. If you're in a swing state and inclined toward a third party, consider using makeminecount.org to swap your vote. As of today Oklahoma has a 99.4% chance of going for Trump, second only to Alabama. Regardless of whom I vote for, my vote truly doesn't count [5]. Well, to be fair, according to this paper there's about a 1 in 10,000,000,000 chance my vote will count. In any case, I'll happily trade my vote with a Libertarian in a swing state [6].

Nearly as important, the Republican Party needs take seriously their role in choosing candidates. With our first past the post system we depend upon the major parties to select candidates who can lead and who can keep the other side honest. Those who would ordinarily vote Republican should think long and hard and vote their conscience. As Samuel Goldman explains, if Republicans don't get their shit together, they're doomed. Our democracy depends on having at least two healthy political parties and right now the Republicans are rotted through and through.

And, God willing, once Hillary Clinton becomes president, here's hoping she thinks long and hard about why Trump came as close to winning as he did. Dismissing his support as that of racists and other “deplorables” misses the point. Like those who voted for Brexit, the people who support Bernie Sanders and Donald Trump are tired of being ignored. They see the major parties worrying about Wall Street, international trade deals, immigrants, identity politics, and a whole bunch of other stuff which does nothing to make their lives better. The average voter can plainly see that politicians on both sides only pay quadrennial lip service to giving a shit about them. If the parties don't start taking them seriously, these voters will find someone who will.

Whatever happens, next month the election will be over. Then this column can get back to the things we'd really rather talk about. Like the mathematics of Richard Guy on the occasion of his 100th birthday: 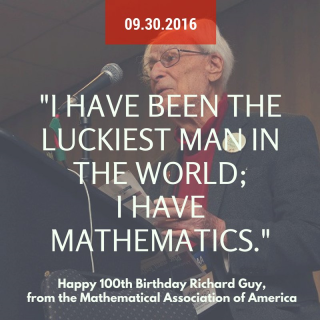 [1] Heck, one person and one volleyball is already sufficient.

[3] Not only do the Libertarians and Greens not have a chance, their candidates this year are also pretty terrible.

[6] Especially since local celebrity Joe Exotic seems to not have made the ballet. 🙂

Disclaimer: As always my essays for 3QD are my opinions alone. They in no way represent the opinions of my friends, family, employer, or the barista who makes my afternoon coffee.