In April Donald Trump howled that the Republican delegate selection process was “rigged“. This was back when it looked like he wouldn't have a majority of the delegates going into the Republican convention. In the first round the delegates are required to vote for a particular candidate according to how they were allocated in their state's vote. If Trump didn't win a majority in the first round, then in subsequent rounds delegates would be free to vote for whomever they liked (Nixon 2016!). Now that he has a solid majority of the delegates, the fairness of the rules used in the arcane underworld of delegate selection no longer holds Trump's interest. Of course, if the “Anybody but Trump” cabal inserts a “conscience clause” in the convention rules to unbind Trump's delegates, he'll no doubt once again start screeching “rigged”. Trump's dire warnings of riots at the convention must be causing lots of sleepless nights among party bigwigs.

On the other side, the supporters of Bernie Sanders have vociferously argued that their guy is also the victim of a rigged system. For a party which claims the high ground of reason and adulthood, the Democrats have done their fair share of conspiracy theorizing: dark suggestions of voter suppression, frenzied freak-outs at the Nevada State convention, and ominous grumbles about “super delegates” subverting the process. Even now there are fantastical scenarios involving the super delegates spontaneously throwing their vote to Sanders and causing a contested Democratic convention.

It turns out democracy can be wickedly unfair.

The bizarreness of this election year aside, surely democracy will tick along and ensure the will of the people comes out on election day. After all, on November 8th the votes will be counted and the numbers won't lie [1]. Right?

A voting system is a procedure which takes in the voters' preferences and outputs a ranking of the candidates. Since there are lots of different voting systems, including ones where each voter has multiple votes they can allocate, or some voters count more than others (super delegates!), maybe we should first agree on the basic principles of what constitutes a fair election.

Let's imagine we have an election consisting of Clinton, Johnson, Trump, and maybe some other candidates who shall remain nameless. Here are some reasonable rules:

1. Each voter should have a complete list of preferences. That is, given any two candidates in the election the voter should be able to tell you which one they would vote for, no ties or complete indifference allowed. We also don't want obviously absurd scenarios such as a voter who prefers Clinton to Johnson, Johnson to Trump, and Trump to Clinton since that voter wouldn't be able to make a selection in the polling booth. To avoid such obvious absurdities let's require that if a voter prefers X to Y and Y to Z, then they must also prefer X to Z. That's what any reasonable voter would do [2]. 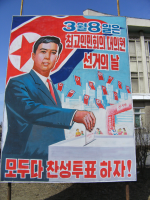 Here comes the bad news. In his 1951 PhD thesis Ken Arrow proved what is now known as Arrow's Impossibility Theorem. It states that any voting system which has three or more candidates and satisfies the ground rules listed above is in fact a dictatorship! After all the paper shuffling and vote counting is over, the final outcome of the election is completely determined by the preferences of a single voter.

The good news is that democracy is messier in real life. It turns out that voters can be unreasonable. It wouldn't surprise me in the least to learn there are 3QD readers who have pairwise preferences among Clinton, Sanders, and Trump which put them in a circle. And if Trump were to implode versus Clinton and Johnson, who's to say that it wouldn't change the voters' preference between Clinton and Johnson? If there is one thing we've learned this year, it is that voters are anything but predictable. Just ask Nate Silver.

Arrow's theorem warns us that no system is perfect — even when it works exactly as designed. Voters need to be ever vigilant that the outcome of elections reflect their true preferences.

[2] Not to say voters are actually reasonable.