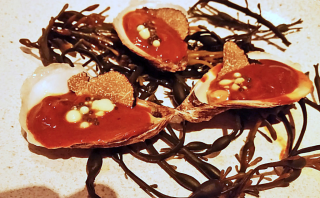 The question of whether food preparation can be a fine art turns on two issues:

As I argued in American Foodie, both these questions depend on whether food can function as a complex symbol or metaphor. Food exemplifies or shows what it's trying to say via its flavors and textures, just as a painting displays its meaning in colors, lines, and brush strokes or a piece of music in its melodic/harmonic structure and timbres. As a conceptual matter these questions can be answered in the affirmative. However, the problem is that chefs must satisfy hunger, cater to taste preferences, and make a profit, and these practical constraints often limit their artistic aspirations.

Thus, when restaurants make an effort to highlight the artistic aspirations of their chefs, it is a special occasion, so I could not resist a trip to Chicago to sample the Art Menu of Rick Bayless and his chefs at his restaurant Topolobampo. Bayless is the acclaimed auteur of refined Mexican cuisine. Each summer his chefs create a tasting menu in which each dish expresses an emotion. The chefs then select works of art from the restaurant's collection of Mexican art that expresses the same emotion as each dish—all explained and depicted in a helpful brochure that is given to guests who order the menu. This is a fascinating experiment in cross-modal metaphor that if successful adds another data point favoring the artistic credentials of food. 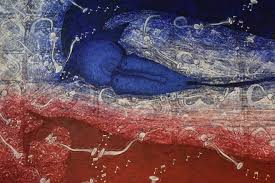 The first course on the menu, a bright, fresh interpretation of Snapper Veracruz using salmon sashimi as the fish was labeled as exuberant, an appropriate description of this dish that features the kinetic energy of olives, capers, jalapenos, and sea urchin all orchestrated to flatter the buttery slices of salmon. As an opener setting an exuberant mood, the dish was superb. But “exuberance” was less successful as an interpretation of the painting, Tierras by Rolando Rojas . While I get the exuberance of the figures that are depicted as if swimming in rippling tides of color, their wraith-like, ghostly presence haunts the painting suggesting death or decay. This points to a potential problem with these cross modal references. While dishes often express a simple emotion, paintings are sometimes more complex embodying conflicting often negative emotions that a dish might have trouble expressing. 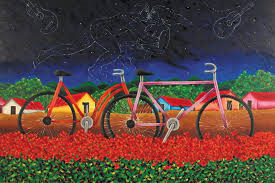 The painting Bicicletas Y Constelaciones by Enrique Flores was perfectly paired. The dark night sky is etched with finely drawn outlines of lovers in sexual embrace as if forming constellations overlooking a brightly-lit colorful scene dominated by gendered bikes absent their riders, parked on a dense bed of luscious flowers in the foreground. Where are the riders? The sky tells all. A very successful dish and reading.

Desire is then supplanted with uncertainty (as it so often is). Carne Apache, two tartares, of yellowtail and ribeye, were capped with a guajillo pepper gelatin sheet, radish, and drizzled with a Szechwan pepper/ponzu sauce. (Pictured below) Because the flavor of tartar is subtle and the flavors of citrus, Szechuan pepper and guajillo are bold it was sometimes difficult to tell if I was eating fish or meat. And of course the dish hovers between Asia and Mexico in its influences so uncertainty seems the appropriate label. There is an issue about emotion in art that this dish raises. Uncertainty is sometimes a state of mind with no emotional content. But sometimes uncertainty is a feeling state if the thing you're uncertain about matters. The issue here isn't whether the dish made me feel uncertain. It didn't. The issue is whether it expresses uncertainty. Just as a sad song need not make you feel sad, yet can still express sadness, a dish can express uncertainty by exemplifying it. 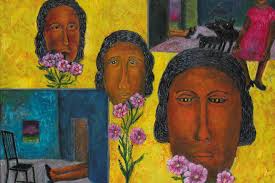 Regarding the painting, an untitled work by Rodolfo Morales, “uncertainty” as an emotion label is at best incomplete. The inset painting on the bottom left of the work depicts a starkly furnished, darkened, room with no inhabitants. In the upper right is an inset painting of a doorway with the feet of a prone body lying across the threshold. Is the body dead or alive? Nothing in the painting provides a clue. There is the uncertainty; the uncertainty of interpretation. But the faces that dominate the painting are stoic with a hint of sadness in the line of the eyes of the middle face. I sense loss and the necessity of endurance in this painting, none of which is captured by the label and I have no idea how to capture it in a dish. 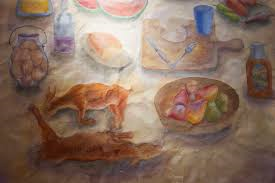 After the strains of desire and uncertainty we are ready for a little serenity, represented by Pastured Chicken resting in a squash-blossom porridge. These flavors brought immediate memories of chicken pot pie or perhaps a thickened chicken soup–very comforting indeed. The gentleness of the soft, yielding chicken and creamy porridge was interrupted only by the spiciness of the roasted serranos that was subtle enough to remain in the background. This was not the most interesting dish on the menu but it was comforting and calming as was the painting by Filemon Santiago with which it was paired. This untitled work of earth tones bathed in soft yellow-tinged light is an evocation of the simple, wholesome foods enjoyed by peasants in a farming community. Another successful joining of visual, gustatory, and emotive metaphor.

The final savory dish, advertised as an expression of nostalgia, was braised short rib with mushroom bread pudding, resting on a puree of greens and sweet potato supported by chile-infused beef broth. I suppose whether this evokes nostalgia or not depends on your own food memories. 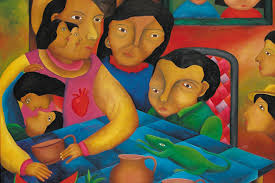 The painting, entitled “Iguana Is Eaten in this House” by Roman Andrade LLaguno, and the chefs explanation of his thought process, suggest the dish should remind us of family and friends. It surely is comfort food in that it is rich, warm, soft, and filling, with earthy, familiar flavors. Yet there is something more complex going on in the painting. In the painting, all of the characters save one are women. The most prominent aspect are their intensely concentrating, parallel eyes as well as hints of female companionship if not lesbianism. The only man in the painting has offset eyes showing clear cubist influences suggesting something is not quite right with him. The iguana, although an important traditional source of food, has more symbolic import in this painting. Iguanas in fact have a third “eye” on the top of their head thus resonating with the “eye theme” that dominates the rest of the painting. And, since the latter decades of the 20th Century, iguanas have become a symbol of feminine power thanks to a photo of a Oaxacan woman carrying iguanas to the market on her head that became iconic. Although there is clearly something nostalgic about the painting it has layers of meaning that suggest some tension with an easily recoverable past. The painting troubles nostalgia, even as it expresses it.

Resonating colors are the theme of the first dessert, with the white coffee ice cream, white chocolate/coconut ganache, white yogurt foam with pour-over chocolate sauce and a splash of raspberry complementing the colors of the painting, which is entitled El Grito (The Cry). Betrayal is supposed to be the emotion here. If you are a dark chocolate purist, you may feel betrayed by the mere appearance of white chocolate, which the chef describes as the point of dish. There is good thematic continuity here; but thankfully this luscious dessert did not make me cry.

And at last a joyful dessert, called Pinata Dulce, named for its crispy meringue that must be penetrated to get at the medley of sorbets and lemon cookie with lemon verbena crema. It had surprising, explosive flavors and complex textures, although it lacked the alien, fantastical, terrifying aspect of the creature in Miguel Linares's painting Alebrijes. It was anything but joyful since it signaled the end of the meal. 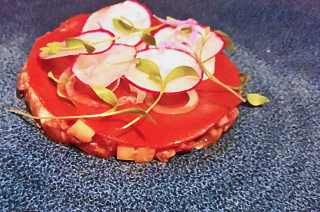 What are we to conclude from this flavorful tour through Mexican cultural heritage? In the interpretation of art and food, it is important to distinguish how the work makes you feel from what the work expresses. A work of art can express anger without making you feel angry. A dish can express joy without making you feel joyful. Of course food (and art) makes you feel emotion as well but expression is a different matter. No doubt food can express emotion, but it isn't obvious that it has the capacity to express complex, conflicting, often negative emotions in the way some works of art do. Food must taste good and be harmonious. That makes expressing negative emotions difficult, although perhaps not impossible. There was after all conflict expressed in the Carnes Apache, the dish with the two tartars described above. What would a meal expressing anger, fear, and resentment be like?

Thus, I think we are better off thinking of food as representational, as representing (i.e. exemplifying symbolically) food traditions and cultural sensibilities. Emotional expression is part of food appreciation but is perhaps not as central as it is for music because music has a wider and deeper emotional range from which to draw. In fact I think wine does a better job of expressing conflict and negative emotions than food does although I'm open to being dissuaded of that.

At any rate, this was a thought provoking meal, and the presentation was superb. Some dishes were more successful than others but emotions are like that as well—some hit their mark, some miss by a mile. There were no wide misses here.

Mr. Bayless and his staff are to be commended for this stimulating meal and if you are in Chicago I highly recommend a trip to Topolobampo.

For more on the aesthetics of food and wine, visit Edible Arts or consult American Foodie: Taste, Art and the Cultural Revolution.