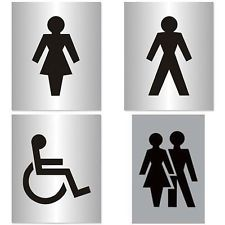 Toilet signs on sale at ebay

Toilet etiquette is where prudery meets absurdity. Your chance of being embarrassed, let alone molested, by a transgender person in a US public toilet is probably zero, and certainly less than your chance of being shot dead at home by a toddler playing with a gun; after all, the only public display of genitalia is at the men's urinal, and you can always use a booth if you prefer.

It is said that an undergrad once asked Sir John Pentland Mahaffy, Provost of Trinity College Dublin, where he might find a lavatory. “At the end of the corridor,” Mahaffy grandly gestured, “you will find a door marked GENTLEMEN; but don't let that stop you.” In the UK, of which Dublin was stll part at the time, class trumps gender. Incidentally, Trinity had been admitting female undergraduates since 1903, 74 years before Harvard; I assume that sanitary arrangements were instituted to cope with this.

It is established law in the US that the teaching of creationism serves a religious, rather than scientific or educational, purpose. It follows (Edwards v. Aguillard) that such teaching is unconstitutional in US public schools, since it violates the First Amendment separation of Church and State. There is no prospect of this ruling being overturned, unless we end up with a Supreme Court nominated by President Ted Cruz.

It has also been repeatedly established that display of the Ten Commandments on Government property violates the US Constitution, for much the same reasons.

So why do we have States bringing in transgender bathroom laws, scientifically baseless (as discussed here by my friend Faye Flam), whose only effect would be to inconvenience and offend one particular small minority? Why has this monumental non-issue even spilled over into the moronic drivelfest that is now the Republican Party's nomination debate?

Why do we have a whole evolving family of “sound science teaching” bills, which would single out evolution, together with climate change, as subjects concerning which students should be taught “both sides”, or the “strengths and weaknesses” of what is in fact well established science?

And why should the current Chief Justice of the Alabama Supreme Court keep on asserting his right to display the Ten Commandments in his courthouse? Does he really think it necessary to inform litigants that God brought them out of Egypt, wants them to be nice to their parents, and disapproves of graven images?

Stupidity? No, strategy. And a strategy that is highly evolved, if not indeed intelligently designed.

Consider how much these issues having common. For a start, there is nostalgia for an imagined era of moral clarity and biblical belief. This feeds in to what is, I suspect, the most powerful of all political motivators, namely the sense of identity. We think as we do and vote as we do because of the kind of person we think we are, or at any rate would like to be. And these three issues translate as assertions of a very American kind of Christian identity. As a corollary, they define an enemy; the smug Liberal sneering at those who disagree with him (would that this image lacked validity). They are timeless, unlike the real issues of foreign policy and budgets; they will still be with us ten budget cycles and three foreign entanglements down the road.

And they work as attention grabbers, and as group identifiers. The major US retail chain Target thought it worthwhile to issue a statement inviting people to use the toilets fitting their self-description rather than their birth certificates; in retaliation, a group calling itself the American Family Association has launched a boycott petition that has gathered, so far, over 850,000 signatures. I do not know what evils the AFA plan to blame on Target, but they are among those who blame Darwin for Hitler, so they'll think of something. AFA regards calls to action on climate change as impious, since the planet is in God's hands. It also defends public display of the Ten Commandments, on the grounds that “the Ten Commandments are the basis of all of our laws.” These views form an identity cluster, and the inclusion of climate change denial is no accident. 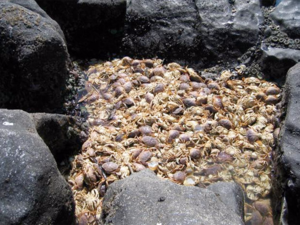 Crabs washed up on a beach in Oregon after suffocating in low-oxygen waters. Credit: Elizabeth Gates, courtesy of PISCO, via NSF

And finally, by the same token, they are perfect distractions from reality. American leaders, at least, could hardly have failed to notice the transgender toilet controversy. But how many of us are even aware of evidence published last week that warming is already reducing the availability of oxygen in the oceans, and that this effect will probably be widespread by the 2030s?

We could be talking about the erosion of democracy, looming water shortages in the US and Asia, the unstable world banking system, climate change, and the facts of economic inequality. Or we could be talking about who is allowed to use which bathroom. If you were a North Carolina legislator, or (more importantly, I fear) if you were running for the Republican nomination, which would you prefer?