Last month, my second academic book was published by the University of Nebraska Press. It is entitled Welcome to the Oglala Nation: A Documentary Reader in Oglala Lakota Political History.

The book reconsiders the history of the Oglala Lakota people, the largest branch of an Indigenous nation commonly known as the Sioux.

The word “Sioux” is a French corruption of a 17th century Anishinaabe (Chippewa or Ojibwa) name for the people who call themselves either Dakotas or Lakotas. Whether one says “Dakota” or “Lakota” depends on which dialect of that language one is speaking or associated with; one of the main differences between the Dakota and Lakota dialects is the pronunciation of the letter D, which Lakota speakers pronounce as an L.

Of the seven Lakota-speaking groups, the largest are the Oglalas. From among the ranks of 19th century Oglala political leaders are some of the most famous Indigenous names in American history, including Tašuŋka Witko (Crazy Horse) and Maĥpia Luta (Red Cloud).

Pine Ridge Reservation, in the southwestern corner of South Dakota, has been home to the Oglala Oyate (nation) since the 1870s; prior to that the Lakota empire spread over much of the northern Great Plains. Pine Ridge Reservation It is also where Ĉaŋkpe Opi (Wounded Knee) is located, site of both a brutal U.S. Army massacre of approximately 200 Indigenous people in 1890 and an occupation by Oglalas and their supporters from the American Indian Movement (AIM) which was laid siege to by the federal government in 1973.

My first academic book, published in 2007, was a study of Oglala politics on Pine Ridge during the mid-20th century. This new book offers a more comprehensive political history of the Oglala Oyate.

Part I of Welcome to the Oglala Nation is a narrative essay that outlines Oglala political history from its origins as part of a Dakota/Lakota confederacy founded in modern-day Minnesota during the 14th century, up through the early 21st c 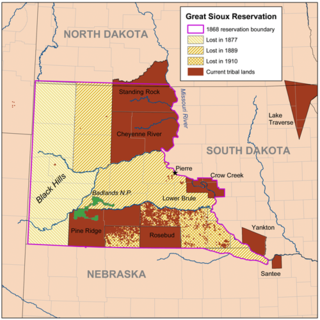 Part II of the book is a collection of 60 historical documents that I selected and edited with an eye towards illustrating Oglala political developments during the past several centuries.

Part III of the book is a bibliographic essay on Oglala political history.

I am offering here an excerpt from the book's Introduction, which discusses the nature of historical research writing generally with regards to American Indian history more specifically.

From Welcome to the Oglala Nation1 . . .

The stories we tell about the past are important. But just as important are the ways we choose to tell them. Of course we must strive for factual accuracy. But beyond that, people also want their stories to have truth, and that is a very different thing altogether.

A story is not made up of facts alone. Facts are merely the building blocks we use to construct a story. The deeper meaning we gain from a story, our sense of truth, is determined by how we select, organize, and shape those blocks into something bigger. And so while many facts are indisputable, the truth is frequently up for grabs, depending on what exactly we do with those blocks.

At first, this may seem counterintuitive. How can the same facts reveal multiple truths, some of them at odds with each other? Yet differing interpretations of agreed-upon facts are part and parcel of storytelling. For example, it is not unusual for two people who witness or participate in the same event to offer radically different interpretations of that event. They may agree on what happened but stridently disagree about why it happened and what its implications and consequences are. Standing on the same facts, each person may tell the story differently to promote his or her own version of the truth.

In seeking to understand the past, writers and historians also offer differing interpretations after consulting the same sources. They may agree on what happened but disagree on what it means, on how to describe and interpret it. For example, consider a 2013 USA Today newspaper article in which the writer referred to the nineteenth-century Oglala Laķota leader Maĥpia Luta (Red Cloud) as a “cunning and brutal warrior” and his followers as “bloodthirsty warriors.” Another recent writer, however, describes Maĥpia Luta as a “spokesman,” “statesman,” “productive political leader,” and “one of the most talented” politicians of his era. Two writers, drawing on the same wellspring of facts, can produce very different portraits of their subject.2

When it comes to American Indian history, non-Indians have long dominated the storytelling, and they have generally told certain kinds of stories, offering a peculiar version of the “truth.” In film, television, literature, song, art, and even popular history, non-Native people have frequently used stereotypes and clichés to define American Indians. Native Americans are typically portrayed as noble and courageous people, full of mystical and spiritual insights, but condemned to an inescapable and tragic destiny. Cruder stereotypes include “bloodthirsty,” “cunning,” and “brutal.”

The standard, pop-culture story line of American Indian history also has a very restrictive chronology. It goes something like this: For thousands of years before Columbus, Indians lived harmoniously with unchanging nature in a peaceful, Edenic wilderness. Paradise was lost with the arrival of Europeans, who had already eaten from the Tree of Knowledge and brought with them all the blessings and curses of civilization. And while Indians' simpler life allowed them to retain earnest nobility and poetic souls, they could not stand up to the technology, avarice, and unscrupulous methods of the more-sophisticated, dynamic, and ascendant Europeans. Thus were Indians doomed to lose a grand struggle that was as inevitable as it was tragic. But it was also for the best in some ways, because Indians were people of a bygone era, obstacles to the United States' starry-eyed destiny.

Throughout the twentieth century, that basic story line dominated how most Americans, and eventually the rest of the world, understood Indian history. And of course it is utter bunk. Steeped more in myth than any reasonable version of the truth, the popular story was incomplete, often inaccurate, and always self-serving. It relied on ahistorical and fatalistic perceptions of American Indian societies and people as static and lacking agency. At best it was a gross oversimplification of a long and complex history; more often it was simply wrong.

However, this version of the Indigenous past persisted and proliferated because Americans nearly monopolized the storytelling; such was the legacy of the U.S. colonial conquest of Indigenous nations. Facing few rhetorical challenges, Americans constructed a version of Indian history in which Indians were fated from the beginning. Through the selective use and misuse of facts, and even outright errors of fact, Americans developed an interpretation of American Indian history that bolstered U.S. national mythology. For it was often the case that when Americans seemed to be telling stories about Indians, they were really telling stories about themselves. For a long time, many Americans used the Indian past as a prop for reciting a story about the United States. In this way were Indians reduced to mere foils and tragic antagonists while Americans made themselves the stars of history. Indian defeat was necessary for explaining American victory, and Indian tragedy helped define American glory.

Americans largely misrepresented the past by casting themselves as superior winners and Indians as noble but inferior and tragic losers. This had the effect of glorifying the United States, but more importantly, it contributed to the continued persecution of Indigenous people by advancing a truncated and perverse version of Indian history. The misuse of Indian history has been part of the ongoing repression of Indian societies and cultures.

History, whether it is told well or poorly, affects how we understand the present and suggests what tomorrow should look like. People usually consider the past while attempting to understand the present and develop policies and goals for the future. History is not the private domain of professional historians. Rather, perceptions and misperceptions of history inform the decisions and actions of politicians, business leaders, cultural figures, and other influential members of society.

After the physical conflict of warfare had largely ended in the late nineteenth century, U.S. politicians, businesses, churches, artists, and individual citizens continued to attack Indigenous cultures, societies, governments, and economies. As the twentieth century opened, persecution continued in renewed forms. Sometimes these attacks were overtly hostile or indifferent to Indian people. Sometimes non-Indians were even motivated by good intentions, although such intentions were often corrupted by problematic and self-serving interpretations of American Indian history. Either way, the damage inflicted was real.

And so it is that the way we tell a story ultimately becomes part of the story itself . . .

The complexities and nuances [in a truer version of Indian history] are vast. For examples, Indian nations often competed with each other as much as, or even more than, they competed with European and American invaders. And although Americans eventually took control of what is now the United States, Indians greatly influenced the outcome, both for themselves and for Americans. Furthermore, hundreds of Indian nations persist to the present day, and their history did not come to a tragic end or neatly demarcated conclusion at any point during the nineteenth century. . . .

There are of course many setbacks in the story of the Oglala Oyate (nation), including the types that are often recounted in popular histories of Indian people. However, the story of the Oglala people is also one of triumph and perseverance. From before contact with Europeans and Americans, and ever since, Oglala Laķotas have conducted relations with other nations, either in alliance or in competition, sometimes gaining the upper hand, and sometimes not. The Oglala nation has also continued to conduct its own affairs, even when its ability to do so has been limited by U.S. colonialism. But despite history's many twists and turns, the Oglala nation is still here. This book offers one of the new ways to understand their story.
—

Akim Reinhardt is an Associate Professor of History at Towson University in Baltimore. His website is ThePublicProfessor.com. His new book can be found here.

1Most citations in the published text have been removed from this excerpt for the sake of brevity.