Human beings are tightly bound by the limits of our intuition and imagination. Even if we grasp an idea on an intellectual level, we often struggle to internalize it to the point where it becomes a native part of our thinking. Rather like the difference between being able to comfortably converse in a foreign language by translating on the fly and being fluent enough to think in the language like a native. Or, as the philosopher Stephen Colbert explained, it's the distinction between truth and truthiness.

We struggle to imagine things much different from what we see around us. This failure leads one in four Americans to believe the Sun goes around the Earth. It means we can't truly grasp the staggering, mind-boggling length of a billion years and this fuels skepticism about evolution. And for science fiction readers it leads to raging internet arguments about whether the authors have any imagination at all.

When it comes to geometry our everyday intuition tells us that we live in the planer geometry of good old Euclid. The angles of triangle add up to 180 degrees, parallel lines will never meet, and the shortest distance between two points is a straight line. But intellectually we know we live on the sphere called Earth, and that the geometry of the sphere leads to triangles whose angles sum to 230 degrees, parallel lines which meet, and flight paths between cities which follow “Great Circles”. 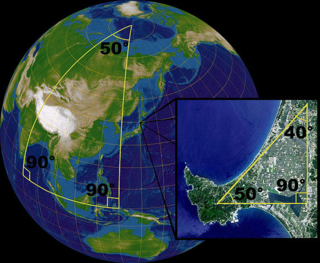 Media portrayals to the contrary, mathematicians are human, too. From Euclid until the first half of the 19th century, everyone was on board with Euclidean geometry. After all, that was what their gut told them geometry should be. But then Bolyai and Lobachevsky showed us that there are more things in heaven and earth than Euclid could dream of. In two dimensions there are also hyperbolic and spherical (elliptic) geometry. In higher dimensions the possible geometries multiply like rabbits and Einstein's theory of relativity tells us that the geometry of our universe isn't Euclidean [0].

How can we free our feeble minds from their Euclidean prison and develop an intuition for these new geometries?

In the late 19th and early 20th centuries a niche industry developed in Germany to develop, build, and sell models of various geometric shapes in these new geometries. In a remarkable blend of mathematics, art, and craftsmanship, they built extraordinary models out of plaster, wood, metal, string, and other materials. Plücker, a famous mathematician in Bonn [1], was an early proponent of model building. The London Mathematical Society owns a set of 14 beautiful boxwood models designed by Plücker. The full collection can be viewed here, but I thought I should share my favorite: 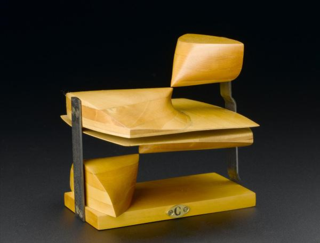 A Plücker model in the LMS collection [2].

Starting in the 1870s mathematical models were manufactured and commercially sold by several German firms. The mathematical, pedagogical, and aesthetic value of these models was quickly appreciated. As part of a demonstration of the high quality of German mathematics, Plücker's former student Felix Klein [3] organized an exhibition of German-made mathematical models for the 1893 World's Columbian Exposition in Chicago.

A good collection of models soon became de rigueur for any institution serious about research mathematics. Most universities have at least a few plaster models gathering dust in some display cabinet. But some institutions have truly remarkable collections. The Institut Henri Poincare in Paris, for example, has over 600 models!

In reading about the IHP's collection, I was pleasantly surprised to learn that mathematical models have made their mark in the art world. In the 1930s Max Ernst, Man Ray, and other surrealists took an interest in the IHP models. Man Ray, in particular, took a series of photos which he later used to inspire his “Shakespearean Equations” series of paintings. For example:

Images and text borrowed from the Experiment Station blog for the Phillips Collection. They are currently running an exhibit on Man Ray and his Shakespearean Equations series. If you're in Washington, DC you should check it out. Details here.

Even after nearly 100 years the original models are of considerable interest. Not only as mathematical objects, but as part of the history of science and as objects of art. People continue to study how they were designed, manufactured, and used. Just creating an accurate record of the various models and their mathematics is a monumental task. Here, for example, is the collection at the University of Groningen in the Netherlands.

Something I find even more exciting is the recent resurgence in mathematical models. We're in a new golden era of model building. With computers and 3D printing we can design and build models which have a precision and intricacy beyond the wildest dreams of Klein and Co. Numerous mathematicians, designers, and artists are using new technologies to build beautiful objects which also embody cool mathematics.

A great example is the work of Henry Segerman and his collaborator Saul Schlemier. My department hosts an annual Math Day for local high school students. Last fall Henry (who is at a neighboring university) was kind enough to bring his 3D models to Math Day and explain the math and art behind his designs. Needless to say, Henry was a big hit! For example, he designed this cool model of stenographic projection: 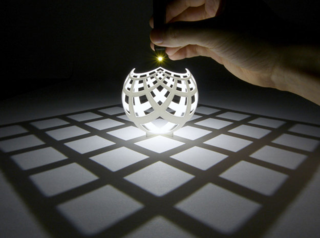 Henry has also created intricate mathematical puzzles and interesting models of four dimensional geometric objects. And while it's true that three interlocking gears on a flat surface can never turn because one always blocks the other two, Henry showed with a working model that you can do it if you allow the gears to be placed in three dimensional space:

In a modern twist, for the cost of the 3D printing you can order a custom copy of Henry's models through his website.

If there is a rock star in the world of mathematical art it's surely Vi Hart. She is best known for her energetic YouTube videos [4]. Vi is a self-described “recreational mathemusician” who builds all things mathematical: sculptures, music videos, video games, and more! Most intriguingly, for the past year she has put her considerable energy behind an open source research group called eleVR. They are developing tools to implement virtual reality. The technology is still a bit rough but the potential is amazing. At the moment they're still experimenting and making creepy videos straight out of a horror movie. But in a few years we will only be limited by what we can dream up. Imagine being able to manipulate and navigate your way through an exotic four dimensional geometry. Even the most seasoned geometer's intuition will be bent into knots!

[0] Worse, string theory predicts the universe has something like eleven dimensions with the majority of them tightly wound together to form one of the exotic geometries known as a Calabi-Yau space.

[1] In a happy coincidence I am enjoying the hospitality of the University of Bonn this week.

[3] Of Klein bottle fame. The Klein bottle is a two-dimensional shape like a hollow sphere which, unlike the sphere, is unorientable. That is, there is no consistent way to establish a set of coordinates. The sphere has latitude and longitude but the Klein bottle has no such analogue. Even though it's only two dimensional, the Klein bottle cannot be placed in 3D space without causing self-intersections. It more naturally lives in 4+ dimensional space. With his brain wrestling with such fantastical geometric shapes, no wonder Klein was a fan of model building!

[4] Vi Hart's videos are great fun but those with a slow attention speed should fortify themselves with a double espresso first.