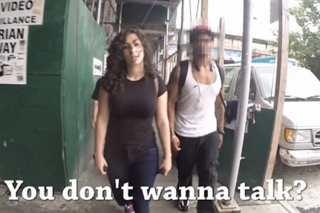 Boys looking at girls, and then reacting with admiration; what could be more natural? In movie after movie a barrage of wolf whistles following Sofia Loren and Marilyn Monroe as they sashay down the street are meant as innocent signs of appreciation. To today’s men, who often react with a distinct lack of sympathy to modern women’s complaints about callcalling and its associated behavior, what we’re complaining about is no different, at least in intent, to behavior that 40 years ago was seen as a badge of honor for attractive women. I have no idea whether it was really felt and taken that way by women in past generations, perhaps that is nothing more than a romantic rose colored view of what was clearly felt as harassment even then. I truly have no idea. What I do know is how the modern forms of this behavior looks and feel to me and any woman I’ve ever asked about it.

If you’re on some form of social media these days, it’s almost impossible that you haven’t witnessed some of the latest volleys in the catcall wars. There has been a steady stream of women trying to fight back in one way or another: one of my personal favorites, a young lady who handed out cards to the men harassing her on the street trying to educate them, almost always without success, about how it felt to be the recipient of that attention. Another one I really like is http://stoptellingwomentosmile.com/; because what could really be more innocuous than telling a woman how pretty she would be if only she would smile, or telling her “hey, smile, it could be worse”? Except, how the hell do you know it could be worse? Perhaps someone just died. Perhaps I just got a cancer diagnosis. Or maybe I have really bad cramps. Or maybe, it’s none of your business whether I smile or not.

And of course, one of the more infamous recent examples, where a woman (an actress hired for the video) walks around New York for 10 hours with a cameraman surreptitiously recording what this woman has to put up with. She doesn’t say anything to these men, she doesn’t look at them, she’s not dressed in provocative clothing and she engages with them in no way, and yet she is harassed over 100 times. As female Facebook friend after friend reposted this video, there was a very predictable explosion of comment threads and some got pretty nasty. One friend posted an interesting observation, which I’ve now tried to verify for myself: she says that when she’s all dressed up (as she often is quite beautifully), she actually attracts less attention from men. But it’s when she’s in her sweats, no makeup, hair unwashed that she can’t seem to shake the catcalls, the men following her, harassing her.

Her view is that they perceive her as more vulnerable and therefore more susceptible to the comments. I do think that a lot of the time, the behavior isn’t about trying to get a date or even a phone number, it’s about power. I’m not going to try to do an analysis of this behavior, there’s been more than enough written on the subject just over the last few months; the racial aspect of it is a whole other dimension that seems to have been mined to death. One interesting addendum to this particular conversation is that when the experiment was repeated in New Zealand, the woman didn’t get any catcalls at all. So maybe this behavior isn’t “natural” after all.

The New York Times debated whether this behavior is something that should be criminalized. I was catcalled on the street the other day and when I turned around and told him where to go, in no uncertain terms, his rebuttal was “it’s a free country and I have a right to free speech”. Was this just his expression of free speech? Don’t I have the right to walk down the street and be left alone? Rights are always in conflict, but this seems to be a reasonably clear cut case of mine trumping his. On the other hand, as a purely practical matter, I can’t imagine how you would actually enforce any such law; what are the odds that this act is taking place in front of a cop? And if it doesn’t, what exactly am I as a woman supposed to do in order to bring this “criminal” to justice?

So it feels like any debate about criminalization is pointless. It also feels like this whole issue plays into a much bigger, broader, more important conversation about the way women are viewed and treated by men, so that, in some ways to think that it will all be solved if we just make it against the law is to miss the point. Something that a few men pointed out on some of these fraught Facebook interactions is that, if you’re attracted to someone and they come up to you in a bar and tell you how lovely you look, it can be very welcome. But if you’re not attracted to them, they’re a creep. Now, this is a pretty simplistic view of these kinds of interactions, but as a woman who has been at the receiving end of both kinds of conversations, I have to own that there is some truth in there somewhere. There is a spectrum of what is acceptable and one of the things that determines where on the spectrum that behavior falls sometimes does have do with how interested a woman is in the man. But often, at least for me, it comes down to trying to ascertain the intent behind the comment; I’ve had women come up to me and tell me they love my hairdo. I’ve gone up to women on the street and complimented them on their outfits, so if a man does either of these things, is it harassment? I guess it depends on the language he uses and how he follows up on my “thank you”. I usually don’t have a problem with someone, man or woman, coming up to me and in a respectful manner giving me a compliment. But, “yo mama, nice tits” really doesn’t fall into the category of a respectful compliment. Though, maybe to the man saying it, it really does. And when I say thank you, is that just an opening for me to now be hit on quite openly?

One of the questions that women debate endlessly is whether there is any point in “fighting back”. Do we ignore these comments or answer back? Does replying just give the person harassing you the attention they were looking for? Do we put ourselves in physical danger by interacting with these men? For the most part, I’ve always said something back. I’m not stupid; I don’t do it when I think I might put myself in physical danger. But to the extent that I do believe that catcalling is often, maybe usually about exerting power, I want to take that power away from these men. I want to own my space and my right to walk down the street. I’ve turned around and chased men down the street. I’ve confronted them and asked “how would you feel if someone said that to your mother or sister or daughter?” On occasion, I’ve actually got an apology. Often I get a stunned look. Occasionally I get cursed out. But I always feel better for having said something even though I’m sure that I have never changed someone’s behavior in any meaningful way.

There’s no easy answers here, it’s part education, definitely part of a much, much bigger problem about how women and their bodies are perceived and treated. The subject seems to be the internet flavor of the month, this too shall pass. Unfortunately, the behavior won’t stop anytime soon.