A city of heavenly gates, Jerusalem is also a city of ill-fated walls.

There are the multiple lives of the glorious city walls, finally re-built by the Sultan of Magnificence in the 16th century; and there is the wailing wall (in my opinion the most beautiful wall on earth) where the Jews go to pray and to remember; and of course there is the new wall, or barrier, built to separate the state from the West Bank. A 26 feet tall concrete monstrosity, it has been attacked by artists and opposed by many international organizations dedicated to conflict resolution, from the Red Cross and the UN to Amnesty International and the World Council of Churches.

When we were in Jerusalem, friends said, “you must visit Bethlehem.” Of course, we wanted to go. To get there from Jerusalem, we boarded Bus #24 from the “Arab Bus Station” outside Damascus Gate. We were told to bring our passports–though this bus drops you within the checkpoint, a bit outside of the town. The ugly Wall dominated the drive into Bethlehem, and I found myself thinking a lot about something I read in book about the history of the Church of the Holy Sepulchre that the Church could in many ways serve as a great model for conflict resolution in the region.

This is very funny, of course, to anyone who knows anything about the contentious history of the church! For the history of the church reads more like comedy or sometimes even melodrama than anything else…. Contributing to the tensions leading up to the Crimean war, down to today all rights of use and maintainance are divided between the main players: the Orthodox, the Armenians, the Roman Catholics and the Copts; with the Ethiopians having been pushed up on to the roof, where they still remain languishing (Chart here). Part of the War's conclusion saw the Status Quo Agreement put into effect whereby not one inch of the church can be changed without the agreement of all parties–and this is why, there has remained a ladder on the roof for well over a hundred years.It takes an awful lot to get all the sides to sit down together to talk, much less to agree to anything!

So bad was it that during the Ottoman times, the keys to the church were entrusted to two prominent Muslim families–whose descendents continue to open and shut the doors of the church each day.

Like always, fact is stranger than fiction. And yet, despite the fact that history has seen the religious groups come to blows again and again over the centuries (with vivid scenes of monks pulling out crucifixes and candletsicks to attack and murder each other right next to the Empty Tomb!); still, being there, I had to admit, I'd take the chaotic and crazy AD-HOC style of conflict resolution and mutual existence to that ugly wall anyday! I kind of saw the writer's point, is what I am saying. Indeed, people said again and again that it is in the Old City, where peoples have lived on top of each other for centuries–bickering nastily, but for the most people in mutual existence–that things were better.

It is, as the saying goes, the walls that divide. Even if it is effective in the short-term, over the long haul, all dialogue ends and relations sour when people are divided. Monologue being a symptom of the colonial imagination, I've never really been a fan of short-term performance/ stop-gap measures… 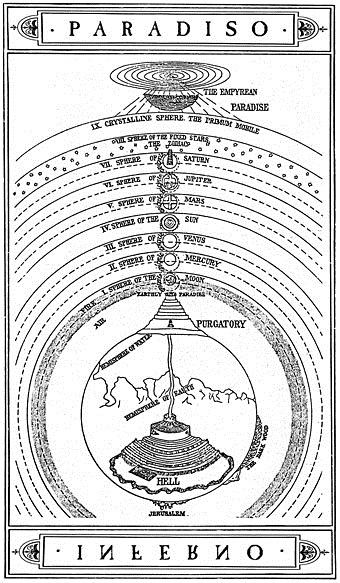 Last month, I wrote about Columbus and his quest for Jerusalem, which was really a crusade to liberate the glorious Church of the Holy Sepulchre. This was not a new project– and in fact, the world Columbus sailed into was not totally unfamiliar to the world of the poet Dante, a hundred prior. It was not just a medieval preoccupation, as both men, being exceedingly fixated on the idea of heaven on earth (paradiso terrestre), saw the dreamed-about earthly eden as being separated from the inhabited world by a great, impassable ocean. Situated on top of a mountain, this earthly eden sat atop Purgatory– directly beneath what was Empyrean Headquarters.

This garden of paradise (and home to Prester John) was in the southern hemisphere on the other side of the world, though. So Columbus had his work cut out for him, And what is really interesting is that directly antipodal to this earthly heaven (with Purgatory beneath it) was imagined to be–yes, you guessed it: Jerusalem, which stood at the “zenith” of the Northern hemisphere. Located in the dead center of the inhabited world, it was thought to lie midway between the Ganges (India) to the east and the pillars of Hercules (Gibralter) to the West. And in this way, it was imagined that Jerusalem shared the same horizon as both purgatory and the garden eden, with the Church of the Holy Sepulchre forming a kind of Ground Zero.

At the crossroads between human imagination and the physical landscape, this sacred geography is something that could be expressed perfectly by the Church of the Holy Sepulchre. Incorporating the actual physical topography of two thousand years ago into the building itself, pilgrims climb UP Golgotha to kiss the spot where Christ was crucified; before climbing down to enter in great hope the empty tomb. Climbing further down are grottoes–more Jewish family tombs and the spot where Saint Helena found pieces of the True Cross in the 4th century, when she also DUG WAY DOWN.

We watched pilgrims moving through the city in groups of large numbers. Just as they had since ancient times, they moved together for protection and in solidarity. People immediately identifiable down to what sect they belonged to. Byantine cross or Latin? Conservative or Orthodox Jew, by hat and coat. Negev Beduoin or Old City Palestinian; secular consumer no less immediately recognizable. Many people sang or prayed as they walked-alone or in groups. Watching them move through the city, one could not help but think of Dante's great allegory of the soul's journey to find God. Down, down, down…

There is a wonderful scene told in Polybius' history about the Fall of Carthage:

After a long siege, Scipio— “the Roman Hannibal”–swept in to inflict defeat on the Carthaginians and raze the city to the ground. Anyone not killed was sold into slavery and the city buildings and its walls were all destroyed. The final moments of the battle have been told and retold. The Carthiginian general, hoping to at least spare any final suffering after he realized that all was lost, had left the citadel to surrender, to the disgust of his wife, who yelling insults at his cowardice leapt with her children into the fires. The entire city was, by that time, I suppose, on fire. And then as the Greek historian Phobius stood at his side, Scipio– with tears streaming down his cheeks, was said to have cried out a sentence from Homer:

A day will come when sacred Troy shall perish,
And Priam and his people shall be slain.

The Greek historian was deeply moved by this; for –as all historians know– the victors always re-write history. And, not just that. For there is such a thing as Homeric destiny, and hence, just as Troy fell, and now Carthage falls, so too shall one day Rome be destroyed as well. The walls will fall.

Maybe this is why so many people have viewed Jerusalem–that heavenly city lying on the same axis as purgatory AND heaven — as not just the center of the world, but also the heart of the world? For the “city of peace” is also the city of never-ending conflict. And, in so many ways, it feels like that is where real history is taking place. Indeed, as history's starting point and many believe the place where history will come to an end, everywhere else seems somehow flat or levelled in comparison– for life maybe is only real in the old city of Jerusalem.

The rest of the Medieval triptych and posts on Jerusalem can be accessed here. My post on Carthage is here. Another song from the best CD I bought this year below.