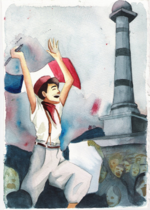 This argument relating French food to Nazism seems to go something like this: (1) French attitudes toward their cuisine are expressions of excessive nationalism, (2) German attitudes in the 1930's about the purity and superiority of their “racial stock” were expressions of excessive nationalism, (3) Therefore, writers (and tourists) who extoll the virtues of French cuisine are implicitly endorsing the attitudes of Nazis toward their alleged racial superiority. What exactly a love of Cassoulet has to do with burning people in ovens we are not told.

I suppose we get a clue from Smith's criticisms of the French treatment of their immigrant populations—especially Muslims.

I have witnessed incessant stop-and-frisk of young black men in the Gare du Nord; in contrast with New York, here in Paris this practice is scarcely debated. I've been told by a taxi driver as we passed through a black neighborhood: “I hope you got your shots. You don't need to go to Africa anymore to get a tropical disease.” On numerous occasions, French strangers have offered up the observation to me, in reference to ethnic minorities going about their lives in the capital: “This is no longer France. France is over.” There is a constant, droning presupposition in virtually all social interactions that a clear and meaningful division can be made between the real France and the impostors.

I don't live in France, but if the American media is to be believed, the French treatment of minority populations as well as rising xenophobia throughout Europe is deplorable, although it is not obvious it is uniquely so. Perhaps the French treatment of immigrant populations is an indication of a kind of insularity endemic to French culture which per hypothesis explains the decline in creativity in French cooking that some authors, including Gopnik, have noted. But smug complacency regarding one's cuisine is hardly the same thing as a regime of genocide or violent immigrant bashing.

Indigenous foods that express the terroir of local soils and the sensibility of a people are about the uniqueness and incomparability of a place. These, by definition, cannot be transplanted; they belong nowhere else but in that location among those people. Nazi “blood and soil” ideology was about universal hegemony. It was about the right to rule over and exterminate others. The conceptual chasm between French food fetishism and Nazi violence is enormous.

Even if we stick to food and ignore the silly notion that “food fights” are akin to real violence, the inference from love of one's culture to attempts at world domination makes no sense. You can praise the virtues of some constellation of flavors or a method of straining soups without thinking everyone must deploy those flavors or methods in their cuisine. Something might work wonderfully in the French style without being appropriate anywhere else, and nothing about the virtues of one locality's food precludes the appreciation of another. Even if the French think they have the world's best cuisine it doesn't follow that they think everyone must emulate or promote it.

Despite this utterly failed comparison, there is an interesting and important philosophical issue percolating behind the slippery logic of this argument. Can you love a place, a culture, a people and think of them as uniquely virtuous without excluding respect for others who are outside that culture? Can one enjoy the goods of being immersed in and loyal to one's own culture while acknowledging the good of other cultures? Is particularity compatible with universalism? The answer would seem to be, obviously, yes. The devil is of course in the details. Some conflicts between cultural belief systems cannot be mitigated let alone resolved. But there is no general or principled reason why love of one's nation or culture cannot be constrained by an acknowledgement of the rights of others. This is true even when the stakes are high. Many of these “food fights” as well as debates over immigration policies are motivated by fears of cultural annihilation. But the French, or anyone else, can pursue cultural survival without excessive force or attempts at world domination.

Arguably, if cultural survival is at stake and there is too much influence from the outside, one's identity or particularity is undermined. The French, of course, have always been deeply protective of their cultural and linguistic heritage, going so far as to have a ministry of the state responsible for the preservation of French identity. Perhaps this exaggerated “anxiety of influence” is the source of Smith's worry that French fascism is hiding under your croissant. But the rational response to such a threat is creative “border management” where new influences interact with entrenched traditions to create new formations that constitute cultural advance. Food traditions are in fact excellent examples of creative “border management”. French cuisine would not have the depth it has without the Germanic-influenced dishes from Alsace, the Mediterranean and North African-influenced foods of Provence, the Spanish influence on Basque cooking, etc. The history of food shows that the “anxiety of influence” is overwrought and food writers such as Gopnik are adept at highlighting this history. Perhaps it is Smith's contention that the French are incapable of such border management. Well, but they obviously are so capable given the history of their food.

Partiality toward one's culture or nation can be benign or dangerous depending on whether it is supplemented by megalomania. Love of one's culture is not dangerous. It is the idea that one's culture is in fact a universal culture that threatens. The French are showing no signs of becoming a world hegemon and Gopnik's writing will hardly make it so.

I predict anti-Gopnikism will join phrenology and the four humors in the dustbin of history.

For more ruminations on the philosophy of food and wine, visit Edible Arts