Let's make one thing very clear. We do not do Valentine's. That would be horribly uncool. But we are not entirely cynical either. So in the interest of a critical, yet marginally hopeful view that can go beyond the intensely heteronormative annoyance of Hallmark madness, here is a post-Valentine post on the nature of the only grand narrative we have left in the world. Love.

And this is the one time of the year when I feel like rejecting it in its every form. Just because the stores, the streets, the movies, and the chocolates all plot in unison to cajole me otherwise. (Yes, the plot is neoliberal capitalism. Yes I know). Also, scratch the last part. I like chocolate.

But if I end up calling this grand narrative corrupt, and false, and superficial, and all those other bad words, then surely I must know what the real deal is? And this is the problem. I really don't. So when I claim that some forms of blatantly marketed coercive love make no sense, what I am really saying is that I prefer some forms of love-marketing over others.

So before you lose all patience, all I'm saying is this: Love is mediated. 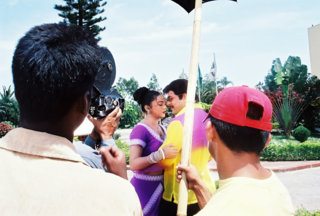 And yes, perhaps there are forms of love in the world that are less mediated than others. Babies and puppies. But I do not have the capacity or the patience to go biological right now. So bear with me. Love is mediated. And no, this is not a bad thing. Humans are mediated beings. We learn how to eat, sit, talk, listen, fear, shout, lean, lose, attach, let go, and hang on. We would be nothing without mediation. We adhere to form. In the loosest sense of the word, even as we produce form. And this gives us the capacity to a narrative, and a stance, and a sense of being in the world. We are the stories we tell ourselves about ourselves (Apologies to Geertz, but well, this could be the new definition for native ethnography). And stories need plots. And we cannot lose the plot.

So in random order, here are three important bits of mediation that structure my narrative. Things, and songs, and movies, and books that I am attached to because they tried telling me how and what to love. Some of these I have thankfully escaped, others lurk in the background.

(a) First on the list, my teenage embarrassments. Triumphalist, young love against all odds. Ladies and gentlemen, I give you “QSQT” and “MPK”. QSQT or Qayamat se Qayamat Tak was made in 1988. The word qayamat can be translated in various ways so I am going to call this “From Resurrection to Catastrophe”, love being resurrection and society being catastrophic. Something like that. A baby-faced Aamir Khan falls in love with a baby-voiced Juhi Chawla. Parents are feuding. They run away, set up a quaint looking cottage in the forest. He can't forage, she can't cook. Depending on which way you see it, this could well be a Marxist tale on how the landed classes are useless and society needs to destruct. Ultimately, the two of them destruct (Oops, spoiler).

What's not to love? Singing in the back of hay filled trucks, and young foolish love. Stupid adults. Dying teens. And Aamir Khan. Different matter that he went on to star in a rather misogynist film called “Dil” full of feisty poor boys, spoilt rich girls who must then be tamed, and yes, stupid adults. Clearly he had the market cornered on the last. For the longest time, I loved QSQT. I mean, sure, I still do. But I was attached to the idea of running away for love, the operative word being “running”.

Then came Maine Pyar Kiya (MPK) or “I Have Loved” of scrawny Salman Khan and squeaky Bhagyashree fame. 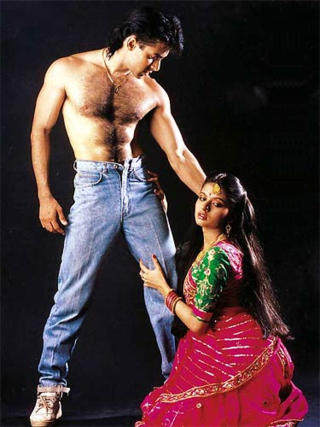 The director of this film, the Right Honorable Shri Sooraj Barjatya as we all well know by know, is all about family. Even more than Karan Johar. Who is all about loving your family. But they are both about giant staircases. And domestic help that is “like” family. And pride. Of some misbegotten form or the other. But I digress. So MPK in short is all about the poor girl who comes to stay with her poor father's rich friend and falls in love with the rich dad's unspoilt son. So rich son has to then leave his father's house and prove to the poor girl's traumatized father that he does not depend upon his father's money. All that masculinity and pathetic rite of passage-ness almost did me in. And let's not forget the heroine's amazingly coquettish passivity either. How very wonderful of her.Yet another film on the rank, dank, seriousness of boy protecting girl, and class warfare mediated by love.

I have watched this film a grand total of sixteen times. Yes, I had a lot of time then. And good Lord, did I pay. For a short period of time, I wasn't sure if I could maintain cross-gender friendships. After all, hadn't the film effectively demonstrated how “a girl and a boy can never be friends”? (If you have the patience, go here to see the Hindi rendition of aforementioned; 5:14 to be precise.) For the longest time, I had a crush on Salman Khan. What of that hairy chest is not to love?

But on a more serious note, while I have thankfully left these behind, what I do remember and see recreated very often is the remarkable lack of imagination in popular Hindi movies of that time. The tinny texture, the pathos of a masculinized landscape and a subjectivity that can't be imagined sans coupling, a resoundingly arrogant social fabric, and yes, the staircases.

So then, now having effectively come to cynicism, and agency, let's move on to the next part of my narrative.

(b) Loss. And masculinity. And here is where comes the pivotal role played by (drum roll please)…. Amitabh Bachchan. All the Amitabh movies I love are from the seventies and early eighties. But I watched them through my growing years. Uniformly, they are all about a quiet, seething masculinity. Where love is something that happens in the background. Invariably other duties take precedence. Mainly mother, pride, revenge, and nation. And as a corollary, often loss of love. Through death. Or dutiful marriage. In this narrative, role-playing is paramount. We all have names, and people with names do certain things. So Amitabh for example, was the “Angry young man”, the operative words being “angry” and “man”.

Again, what's not to love? Remember, I had neither come to feminism nor postmodernity. Sure, in regular life I was both and amply so. Just that in my fantasies, somebody had to come rescue me from these twin burdens.

In this narrative, things all had their due place. And I must confess that I used to be quite a structuralist. Name, place, animal, thing, all had their due position in the hierarchy and together, we were involved in the giant plot that made the world turn. And love was often secondary and destined to lose to causes of heavier note.

Bits of this narrative still linger. It's primarily laziness. I just want a bigger cause than a small period of heteronormative bliss. I mean, think about it. Isn't the idea of a fatal saga or a national struggle much more seductive than marital stupor, dirty dishes, and a bourgeois home? Come on now.

(c) And finally, we come to the last set of narratives. Complexity. And where better to look for it than in that beautiful modern invention, the novel? I give you Gabriel Garcia Marquez's Love in the Time of Cholera, a crazed and surprisingly exuberant enunciation of the excess that is love:

With her Florentino Ariza learned what he had already experienced many times without realizing it: that one can be in love with several people at the same time, feel the same sorrow with each, and not betray any of them. Alone in the midst of the crowd on the pier, he said to himself in a flash of anger: 'My heart has more rooms than a whorehouse'.

Is there anything left to say? For one, this mini essay has been about coupling, and not about the many forms of love that populate our existence. I plead space. And yes, war. And of course, global warming.

So here are my last two cents. Mediation is all around. But perhaps we can also find formless love, escape narrative, and merely be sensate. We can find love for the taking. In all its forms. In myriad sets of people. We do not need to set our hearts on one true love, and we need not make one person the bearer of all our narrative burdens. We can give love as much as we walk around hungry for it. And therefore, as a little post-February 14th missive, let me end by hoping that you are all happy for the love you do receive and I hope you can remember to show some. Tonight, I have flowers on my sill; it's warm in here.