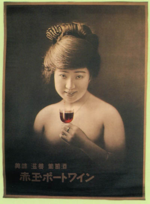 Valentine's Day is fast approaching; it's time to think about which wine will precisely calibrate the proper mood. But why wine? Why not a nice craft beer or a glass of orange juice? Why is wine the beverage that signals romance?

I would imagine wine and romance have been linked since our ancestors first discovered the benefits of moderate inebriation. The loss of inhibition and gain in confidence make wine a natural ally in games of seduction. But the relaxing of inhibitions is not the only benefit that wine confers on the amorous. Romance requires illusion. We fall in love with an idealized version of the beloved, believing he/she has all the virtues we admire and none of the negative traits we shun. Evolution has designed us to drop the skepticism when presented with the promise of procreation.

The Roman poet Ovid, in his 17 A.D. work “The Art of Love” says of wine that, “It warms the blood, adds luster to the eyes, and wine and love have ever been allies”. Given the paltry proportion of “beautiful people” to ordinary shlubs, adding “luster to the eyes” may be the most significant contribution wine has made to human existence. But, in fact, scientists have demonstrated this effect with beer as well—it has come to be known as “beer goggles”. Inebriation cannot explain the connection between wine and romance since any alcohol would suffice—yet, a can of “bud” just doesn't have the same meaning as a bottle of Dom Perignon. There must be something else about wine that connects it to romance.

Is there something inherently and uniquely amorous about fermented grape juice? In fact the history of wine as an aphrodisiac is as lengthy as that of food. It gets a less-than-enthusiastic mention in the Talmud and a much more enthusiastic discussion in the Roman historian Pliny's 1st Century Natural History, where he recommends wine be mixed with the muzzle and feet of a lizard or the right testicle of a donkey to cure a reluctant libido. Are you feeling the romance yet?

Various similar legends continued well into Enlightenment Europe. Mozart's Don Giovanni used a repast of “chocolate, coffee, wine and ham” to help the ladies acquire the proper attitude, and throughout history wine has been used as a gift to indicate romantic interest as well as being an integral part of the wedding ceremony.

Even today the notion of wine as love potion is rehearsed by scientists (or their publicists) looking for a catchy headline. According to Dr. Max Lake, author of the book Scents and Sensuality, the aromas of some wines resemble the scents of human pheromones. Allegedly, it is the earthy scents of some red wines such as leather and musk that resemble male pheromones. Female pheromones resemble the sweaty or yeasty aromas in some white and sparkling wines. However, despite the efforts of Dr. Lake, the science of human pheromones and sexual attraction is uncertain, which is a good thing since none of this talk of pheromones seems particularly romantic.

If wine is to be linked to romance, it will not be through a direct causal connection but instead through its symbolic or metaphorical significance. Why does the idea of wine symbolize romance? One reason might be that wine can be expensive and thus signifies wealth. Expensive things are often seen as romantic. True, an inexpensive can of Bud Light by candlelight just doesn't turn up the temperature. But, on the other hand, a 40 year bottle of Glenfiddich (Scotch), although it might set you back $2500, doesn't connote romance either. So it is not just the expense that matters.

Wine is also conducive to sharing. One bottle for two people is the perfect amount for an evening. By contrast, beer is sold in individual containers and typically not shared, and trying to share a whole bottle of Glenfiddich would hardly contribute to romance, unless passing out on the bathroom floor hugging the porcelain throne is your idea of romantic. But the wine bottle's perfect proportion is not substantial enough to establish a robust relationship between wine and romance; and in any case wine was associated with romance long before it was served in bottles.

I don't think it is the concept of wine that connotes romance so much as it is the sensuality of the experience of it. Romance, in its most concrete way of being, is not really about perpetuating the species, sharing a life, or assessing the value of something. Yes, love is about these things, but romance is more narrowly focused. It is about small things that activate the senses. It is initiated by a shy smile, an intriguing glance, the way someone moves across the room, the shapely outline of bodily form, or a well-placed murmur of approval insinuated into a conversation. It is sustained by the anticipation of things to come, the unfurling of mystery, an evolution without end that perpetually concentrates the future in a pregnant now. Romance is about sensuality.

It is one of the great gifts of life that consuming fermented grape juice can resemble the experience of romance. The curvaceous shape of the bottle, the pop of the cork, the deep ruby or pale gold color as it splashes into the glass signal the beginning of sensation. Aromas that remind us of voluptuous fruit burst from the glass to be replaced by earthy, musky fumes that connote carnal knowledge. As we sip, we hold the wine in our mouths to maximize the sensation of creamy viscosity or light, racy runnels of flavor. Each bottle of wine promises new and different perceptions and a new summit of sensation, and each sip, if the wine is of quality, can reveal something previously hidden. Wine's evolution in the bottle, in the barrel, and from vintage to vintage is its most mysterious, capricious aspect. One never knows what to expect and its improvement or degradation hangs in the balance.

It is therefore no accident that words such as sexy, seductive, supple, or luscious are used to describe wine. A bottle of wine can be an alluring and capricious mistress, boldly grabbing your attention with aromas and tastes that disappear, leaving you wondering exactly what you are tasting. Or a wine can be reticent at first, shyly revealing new layers of flavor with every pour.

Some people fall first for a voluptuous Merlot, then become intrigued by the power and structure of Cabernet Sauvignon, and finally settle on the beautiful but elusive Nebbiolo. But for me the temptress has always been Pinot Noir. Most great wines are flavor driven. They are attractive because they have deeply concentrated fruit flavors that explode in the glass and persist, commanding your attention through a long, luxurious finish. But Pinot Noir is all about texture. It is silky and supple in a range from gossamer to well-worn suede. It languidly sits on the tongue, charming, beckoning but demanding nothing and making no bold announcement. The good ones from Burgundy, upon further inspection, reveal earthy truffles and animal-like aromas that unveil their libidinal charge. These are fleshy and fecund. They manage to be elegant and carnal at the same time.

Wine can take on the meanings of romance, because the experience of it is the closest thing in life to those magic moments when love beckons through exquisite sensory awareness. So the next time your favorite wine critic describes a wine as sexy its not only her imagination that is running wild.

More ruminations on the Philosophy of Food and Wine can be found at Edible Arts.