My old friend C. laments the way “play” is diminished in the West.

Western culture belittles play since it represents something very powerful to be controlled. Play represents quite fully: a journey, education, exploration to discover our full nature.

To live is to play… and as a adult “play” is taken away in order to keep people in the box… to prevent them from “journeying” to greater states of being.

His words interested me greatly since I have been struck by something similar upon my return here.

Sometimes I feel a little like Rip Van Winkle. Back in America after twenty years away, things sometimes take me aback, and I am always left wondering: Was it really always like this? Wasn't it different back when I was a kid? Wasn't life more playful back then? Why does everything feel so humorless now?

For my man Heidegger, play was crucial. And according to Heidegger, the essence of play has nothing whatsoever to do with “leisure providing an interlude from the seriousness of work.” Rather, “the mystery of play is the play of Being by which Being reveals and conceals itself.” That is a roundabout way of saying that the history and destiny (Geschick) of being unfolds in playfulness, and human beings in any given age are to “corresponsively participate in the play of the Geschick of being.” 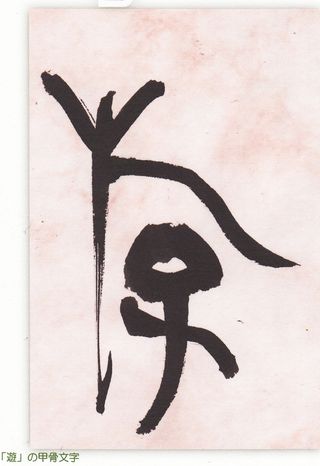 One of Japan's greatest linguistic scholars, Shirakawa Shizuka, also was fascinated by the concept of “play.” After an impressively long career of studying Chinese characters, he famously declared his most beloved character of all was the kanji for “play” (遊).

It turns out, though, that originally in the archaic Chinese script 遊 didn't mean “play” in the sense that we know the word today at all. Way back when, the character conveyed the concept of “journey.” Hence, the title of one of my favorite Chinese Southern Song dynasty paintings, 瀟湘臥遊図巻 (“Dream Journey Over Xiao-Xiang”).

Shirakawa explained that the character originally depicted the image of a man going out on a journey, carrying a tall flag, perhaps not unlike that of China's first great traveler Zhang Qian who was dispatched by the emperor on a secret mission in the 2nd century BC. Luce Boulnois describes his travels:

Zhang Qian led his horse, carrying the insgnia of is imperial mission: a bamboo pole over two meters long, with three tufts of yak-tail hair attached to it. This yak tail hair can reach two meters long and has always been an emblem of power across a large part of continental Asia.

Kidnapped not once but twice by the deadly Ziongnu, Zhang skirted the Tarim basin, traveling south of the Kunlun Mountains, making it as far as Ferghana– place of the heavenly horses. He was gone over 30 years and having lost all of his men except one, he finally made it back to the capital. And, they say that he somehow brought back that flag. In China, Silk Road history begins with his remarkable journey to “open up the West.” I personally have always been astounded by the flag: he lost all his men, was kidnapped twice, married, had children– but somehow depite all that, he kept that flag with him right till the end. 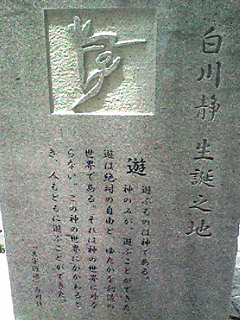 Shirakawa loved the kanji for “play” because of this. Commemorating his life's achievements, the Shirakawa Shizuka Memorial stele displaying the kanji for “play” at left was erected in his hometown in Fukui. He wrote that he loved the idea freedom inherent to the concept of “play”– since he said in ancient times, the idea of “freedom” was thought to be how the gods “played” and lived– in perfect freedom– as an end in itself (like a kiss?).

“Play is something sacred. Only the gods could truly play. Play signifies absolute freedom and a rich world of the imagination that existed only for the gods. When people came to access this world of the gods, they too were able to play. And when they played, the gods would come out and join them”

Heidegger echoes the same idea when he declared:

Heidegger felt that it was only through play that human beings could be “released” (gelassenheit) from their relentless will to impose their subjective categories on things and to legislate the way things must be– for he lamented that the entire history of Western metaphysics was a history of rational prescriptions about what Being must be. In this way, I imagine that Heidegger would not have been at all surprised to hear me complain that “play has disappeared.”

Of course, there is no room for “play” in our world now, because nowadays everything must somehow become under our human control– in Heideggerean terms, everything has become a resource to be used, even our own lives. Every moment must be used efficiently and replacing play we now have amusements which are in many ways aspects of “work” (since amusements are taken up with consumption and are themslves means not ends). The great Dutch scholar Huizinga, who wrote the most charming essay on the play-function of all time, also positioned archaic play in contrast to the modern condition of prosaic efficiency, utilitarianism and “the hell of the literal.”

In this way “God is dead” is also to suggest that play is dead– in our age of efficiency, consumption and earnestness.

A friend suggested I take a look at Coomaraswamy's wonderful essay on the Hindu notion of lila. After reminding the reader that “play” was also essential to the ancient Greeks (for example, Plato's repeatingly telling us that “human affairs ought not be taken seriously” and for us “to take no thought of the 'morrow”), Coomaraswamy unpacks the idea of Buddha-lila in the Jatakas. Calling it a kind of “virtuosity,” he says, the grace of Buddha lila is, like Brahma lila, the manifestation of the self in action.

Philosophers working in Chinese philosophy, are now taken up with notions of “virtuosity” –since it gets at the practical immediacy and embodied agency imagined in the Confucian vision. And accordingly, virtue is seen as a kind of sensibility, “know-how,” and connoisseurship. Like a dancer, a sage just knows what to do in any given situation because he has practiced his role again and again. I would argue that a sense of “play” is essential here as well, as it is “play” which allows a person to focus on the role they are playing and not get too caught up in ego projects or intellectual analysis. It is a kind of letting-go and an understanding that we can only control what we can control. This is always what is so engaging about performance art: the sense of play and artistry or craftsmanship. Fingarette described the “immediacy of action” held up in the Confucian vision as being somehow “magical.”

Or as R says: “ISness… It is all about the flag –and carrying it unflaggingly.”

I mentioned Genevieve Lloyd's book on Providence Lost here not that long ago. Here is a quote from her book that explains the title that I like a lot:

But what's happened I think, is that we've inherited that Cartesian way of thinking of the will and with it, that way of thinking of responsibility and human control, and I suppose mastery of nature, but without that framing idea of providence that made it bearable. So we're left with relentless, endless responsibility. Whatever goes wrong in human life, there's always someone or something to blame. So that's the point of the title. It's 'providence has gone missing if you like'.

There is no going back–no “return.” And maybe this is why life here seems so flat. Like instead of a playful journey, life has become something to be “fixed” or efficiently utilized and consumed. The loss of play is certainly related to what is a real loss of “style,” “romance” and hospitality in the culture as well. Huizinga argues –not unlike Heidegger– that play was until the 18th century, a fundamental mode of our being-in-the-world. Related to style, talent/performance and skillful negotiating, he says that “play” in almost all cultures is intimately related to erotic/romantic love.

Of course, it is a well-known fact that historically, the most alluring men were not necessarily tall or handsome or even wealthy, but history's great casanovas all possessed a certain charisma. Romance unfolds in play–with rules and a marked off playground in which contenders can display their skills in a ritualized performance art. Romantic love is in the end like all play– an interlude from daily practical life and an end in itself. And Huizinga goes so far as to suggest we are not homo sapien– nor are we as Nietzsche suggested homo fingens, since fundamentally human beings, living in their imaginative narratives are at base, homo ludens.

It just seems obvious that the best things in life are not only inefficient but they are worthless (outside their own inherent pleasure and inherent meaning)–for they are ends in themselves; utterly absorbing and grounded totally in the mood of that moment.

More about play in paradise here.