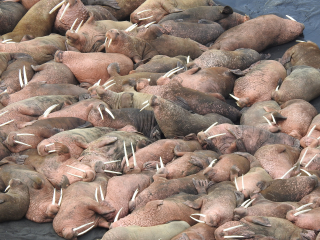 Arriving early for our flight, we found the other six passengers checked-in and congregating around an old topographical map of Alaska hanging on the wall in the small airline office.

“Does anyone know where exactly we are going?” asked a woman, breaking the silence.

We all edged forward, squinting at the map. It was July. But cold enough to wear my puffy coat. My eyes traced the 1500-mile-long arc of the Aleutian Range. Running down the Alaskan Peninsula, the land on either side of the mountains is mainly wilderness and wildlife refuges. Even more astonishing was the complete absence of roads. As a Californian that is hard to fathom.

Instead of cars, they have grizzly bears. One of the highest populations anywhere in the world, in fact. But we were not going for the bears. We were traveling to this remote location because it happens to be one of the best places in the world to see a walrus haul-out.

It was time to board our plane. The Beech 99 had seen better days. As the smell of smoked salmon filled the cabin, someone mentioned the lack of airsick bags. At least we were leaving on time.

Looking across the aisle at my husband, I saw his eyes were gleaming. This is a guy who never once questioned why we were spending all our money to go to Alaska to see walruses. He was up for anything.

Smiling over at him, I thought he had never looked happier. END_OF_DOCUMENT_TOKEN_TO_BE_REPLACED