The dream of a violent and destructive “revolution” that will “sweep away this sorry scheme of things entire and remake it nearer to heart’s desire” may or may not be an old idea. Some think it is derived from the apocalyptic visions of various Judeo-Christian cults and prophets, others that it is a relatively new idea that arose in post-enlightenment Europe and got exported to the rest of the world. Whatever the case, it is an idea that permeates modern millenarian ideologies like communism, and from that fecund source it has found its way into Islamism and dozens of other ideologies that yearn for total transfromation rather than incremental change. We in the subcontinent have not yet seen an organized premeditated revolution akin to the Russian or Chinese experience, but in the 20th century, we did see at least two episodes of very violent and sudden re-ordering of affairs, once in 1947 and then in 1971.

Neither episode was marked by anarchy in every corner of the subcontinent; the anarchy of 1947 was especially concentrated in West Pakistan and East Punjab. Many terrible massacres and crimes occurred in other parts of North India and Bengal, but Punjab was by far the worst hit and the most totally transformed. In West Pakistan, countless prosperous Hindus and Sikhs lost lands and businesses and moved to India (or died in the attempt). All this property was then reassigned to new owners. Keep in mind that urban property in particular had been heavily concentrated in the hands of Hindus and Sikhs. e.g., all of Anarkali bazar in Lahore was in Hindu hands prior to partition and on the main road (Mall road) there was only one Muslim-owned building (Shah din Building). Almost all cinemas and other valuable commercial property were owned by Hindus and Sikhs. Evacuee property boards were set up to try and bring some order to this process but the administration was as virginal as the state. A very small number of Muslim officials suddenly found themselves in the position of deciding the fate of property and assets worth billions. In the ensuing scramble, the most enterprising, the best connected, and the least scrupulous managed to grab vast wealth and opportunities, while millions didn’t even realize the full significance of what was happening.

Terrible massacres and riots were not just the result of deep religious hatreds or the sudden eruption of primal human savagery;

enterprising crooks took advantage of the anarchy of partition to get rid of competitors and anyone whose property looked ripe for plucking. As matters stabilized, terrible crimes and atrocities disappeared into the black hole of memory and the new elite got busy embellishing its own mythology of “deliverance from the Hindu yoke”, with little mention of how this “deliverance” involved the looting of existing property and the takeover of institutions and positions suddenly left vacant by the departure of the Hindu and Sikh elite.

END_OF_DOCUMENT_TOKEN_TO_BE_REPLACED 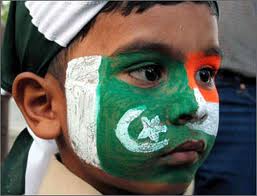 Pakistan and India are celebrating the 64th anniversary of “Freedom at midnight” with their usual mix of nationalism and jingoism (Bangladesh seems to ignore this nightmarish dream anniversary and will be mostly ignored in this article). The fashionable opinion about India (within and without, though perhapsless on the Indian left) seems fairly positive; about Pakistan, decidedly muddled if not outright negative. Is this asymmetry another manifestation of the unfair assessments of an Islamophobic world? Or does this difference in perception have a basis in fact?

I am going to make twin arguments: that the difference in everyday life, everyday oppressions and everyday successes is LESS than commonly stated (though a gap may finally be opening up), but at the same time, the asymmetry in their ideals and foundational myths is much greater than outsiders tend to see. Outsiders in general tend to see other nations as generic “nations”; they assume (usually unconsciously) that the default “national interests” are likely to be reflections of the same set of assumptions everywhere. My argument here is that this is frequently true and is true enough of India and Pakistan in many cases (e.g. in negotiations over river waters), but there are some unique elements in the Pakistan story that slowly but steadily push in a less desirable direction, even as the normal evolution of society brings in modernization and economic growth; and unless these are damped down, these “unique elements” have the potential to sink Pakistan. On the other hand, if these can be ignored or painted over, then Pakistan too can become just another “normal” South Asian country, faced with similar problems (some worse, some much less than its neighbors), to which similar solutions can be proposed.