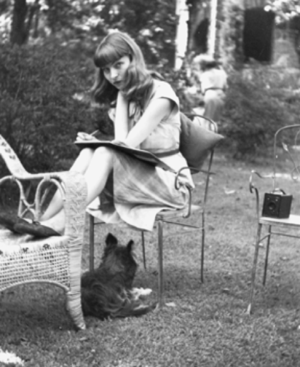 It was the first garden party of the year. In attendance were a couple dozen writers and would-be writers, a pastor, and myself. I knew no one except the host and a couple of other people, who were all knotted around each other engaged in writerly shoptalk, so I made friends with the buffet. A potato salad presented itself to my acquaintance. We got on well, but there was no place to sit. A white-haired lady was perched on the side of a chaise out on the patio, not quite taking up the whole length of it, so I asked if I might occupy the end. She nodded her approval and looked at my plate. “How’s the potato salad?” I said I thought it was fine, but would benefit from some pickles. She claimed it as her own contribution to the buffet and quickly changed the subject.

“This party could have happened forty years ago,” she began, with the authority of an eyewitness. She pointed out the clothes people were wearing, their quiet and respectful social configurations and controlled outbursts of laughter. Her finger rose to single out a girl in shorts as the sole anachronism. Whether by force of empirical evidence or persuasion, I could see she was right.

But she did not linger long on the lawns of past parties. Turning to me she asked what I did, and soon we were talking about languages. Though she reads French, she confessed to not really believing in other languages; a chat is qualitatively not a cat. Then she stretched out her foot, “This is not a pied”; the streets of Paris may perfectly well be full of chiens, but they are not full of dogs. French words were like signifiers; they stood in for meaning like a paper cut-out stands in for the real chat. A man came by at that point whom she introduced as mon mari. Seeing my expression, she was quick to reassure me that he was not a signifier, but the real thing.