Why did we evolve to become bipeds? 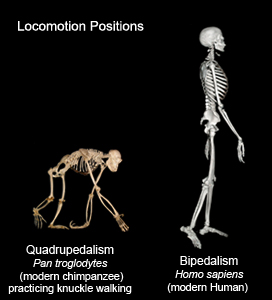 “Plato once defined humans as featherless bipeds, but he didn’t know about dinosaurs, kangaroos, and meerkats. In actual fact, we humans are the only striding, featherless, and tailless bipeds. Even so, tottering about on two legs has evolved only a few times, and there are no other bipeds that resemble humans, making it hard to evaluate the comparative advantages and disadvantages of being a habitually upright hominin. If hominin bipedalism is so exceptional, why did it evolve? And how did this strange manner of standing and walking influence subsequent evolutionary changes to the hominin body?

“It is impossible to ever know for sure why natural selection favored adaptations for bipedalism, but I think the evidence most strongly supports the idea that regularly standing and walking upright was initially selected to help the first hominins forage and obtain food more effectively in the face of major climate change that was occur­ring when the human and chimpanzee lineages diverged. …

“Between 10 and 5 million years ago, the entire earth’s climate cooled considerably. Although this cooling happened over millions of years and with endless fluc­tuations between warmer and colder periods, the overall effect in Africa was to cause rain forests to shrink and woodland habitats to expand. … if you had the misfortune to be living at the margins of the forest, then this change must have been stressful. As the for­est around you shrinks and becomes woodland, the ripe fruits you hunger after become less abundant, more dispersed, and more sea­sonal. These changes would sometimes require you to travel farther to get the same amount of food, and you’d resort more frequently to eating fallback foods, which are more abundant but lower in qual­ity than preferred foods such as ripe fruit.