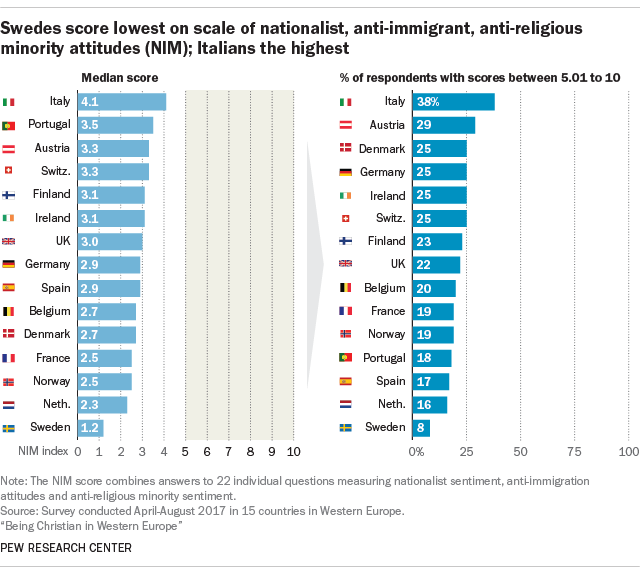 Jeff Diamant and Kelset Jo Starr over at the Pew Research Center:

To better examine the prevalence of these attitudes, the Center developed a scale to measure the extent of Nationalist, anti-Immigrant and anti-religious Minority (NIM) sentiment. The NIM scale combines answers to 22 survey questions on a wide range of issues including views on Muslims, Jews and immigrants, as well as immigration policy.

Respondents’ scores increased if they said that immigration to their country should be reduced; that they were unwilling to be neighbors or relatives with Muslims or Jews; that immigrants from certain regions are not honest or hardworking; that Islam is fundamentally incompatible with their national culture and values; that being born in their country is important to being “truly French,” “truly German,” etc.; and for expressing a host of other sentiments on related topics. The higher the score, the more likely a respondent had expressed nationalist, anti-immigrant and anti-religious minority sentiments during the survey. Scores on the scale range from 0 to 10.

Relatively few adults in every country surveyed score above 5 on the scale. But there is considerable variation across countries. In Sweden, just 8% of those surveyed scored higher than 5, the lowest amount in any country, while in Italy, 38% did, the highest share in any country. In most countries, the share scoring 5.01 or higher was between 15% and 25%. For example, in both Norway and France, 19% of respondents scored 5.01 or higher.

The NIM scale also provides an opportunity to explore whether factors such as age, political ideology or religious affiliation are associated with these kinds of attitudes.