Having taught Philosophy for 46 years in three Universities—two State and one private—and never taught a Critical Thinking course one might have some questions about my choice of topic. My response is two-fold. First, there is a sense in which no matter what the topic of a particular course philosophy is always about critical thinking. One’s lectures are intended to model careful, reflective thought, sensitive to both the considerations favoring one’s views as well as the strongest objections. Second, because it is always going to be essential to use and define essential logical terminology.

So in the first week of my course on BioEthics I would discuss what is an argument, the difference between a valid and a sound argument, (illustrating this with the offer to produce 100 valid arguments for the existence of GOD), what is wrong with circular arguments, what it REALLY means to “beg the question”.

I also discuss the difference between refuting an objection to your claim and presenting an argument proving the claim.

But the focus of my class is on particular ethical issues—cloning, genetic engineering, informed consent, etc. It is not on the broader issue of the various ways that our search for the truth can flounder, or be led astray, or be hijacked.

We need courses devoted to such matters because we are living in a time where the dangers to informed and rational thought are not so much bad or sloppy thought but a poisoning of the flow of reliable information. It is not the transition from premises to conclusion that is often at fault but the premises themselves. Philosophers who teach Critical Thinking courses need to adjust their syllabi to take this into account.

It is important to keep two issues separate–cybersecurity and the spread of false information.  Much of the discussion of Russian interference with the 2016 election has been in terms of their hacking into the DNC servers.  But, for our discussion, the crucial issue is the the way that false information is created and disseminated. This is what students need to be informed about and  learn to recognize.

There is by now a considerable literature on the ways in which, in the U.S. and other countries, false and/or misleading claims are spread to a wide number of people. There are two main flaws in the information spread. First, there is intentional falsity. Second, such false claims are disseminated to a wider audience than ever before.

Why people are spreading completely false information is a complicated question. In the case of Russian interference it is obvious. They have a goal–to disrupt and cause chaos–and their lies are a means to that end. In other cases people may simply be ignorant or uncritical. But the main question for students is not why people are spreading falsehoods but determining that they are false.

A second issue is what allow such crackpot stories as Pizzagate to spread so widely.  Here students have to learn the details about how social media such as facebook interact with bots to promote even wildly improbable claims.  A useful exercise for students would be to examine the path by which Pizzagate arose and was disseminated. Here is the answer but one would want the students to try and find it themselves.

Another exercise for the class:

“I’m Jewish, and there’s a set of people who deny that the Holocaust happened. I find that deeply offensive. But at the end of the day, I don’t believe that our platform should take that down because I think there are things that different people get wrong. I don’t think that they’re intentionally getting it wrong, but I think it’s hard to impugn intent and to understand the intent. I just think, as abhorrent as some of those examples are, I think the reality is also that I get things wrong when I speak publicly.” —Mark Zuckerberg

I actually think that this is a hard question to think about. But it will raise questions such as: Can we be certain that some proposition is false?  Even if we are certain does that justify censoring the expression of such a proposition? Does it make a difference that the statement appears on Facebook where it will be widely circulated?

Ideally, one would want students to learn and think about new developments on the horizon that threaten to poison further the wells of information. For example the issue of what has been called “Deep Fakes.”  It refers to digital manipulation of sound, images, or video to impersonate someone or make it appear that a person did something—and to do so in a manner that is increasingly realistic, to the point that the unaided observer cannot detect the fake. 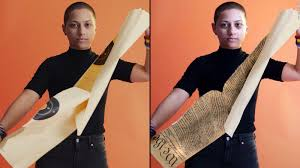 The technology is now available, and improving every day. The most prominent example so far involved Evelyn Gonzales, the Parkland student who became a spokesperson for the students.  She appeared in a video tearing up a piece of paper with a target printed on it. Shortly thereafter a fake video of her appeared with the piece of paper being torn as the Constitution. This was reproduced on social media many times over.

Students could be asked to suggest ways in which this threat to veracity could be checked or discouraged.

Students could be encouraged to think about how AI is used to devise ways to spread misleading and false information. For example, machine-learning algorithms using social-media can prioritize information that the user is likely to accept, based on past information.  How might we use AI to counter this use of our own cognitive weaknesses?

I do not wish to suggest that the only courses that deal with these issues are those in Philosophy Departments. Librarians have been training students in how to find reliable sources of information. Departments of rhetoric have also taught such courses. But for many students, their access will be via a course in Critical Reasoning. And for such students, as important as it may be that they learn the difference between modus ponens and affirming the consequent, it is still more important they learn about targeted propaganda and deep fakes.

There is a double meaning of “Critical” in Critical Reasoning. I never noticed it before but it is the sense of urgency and importance that has come to the fore.