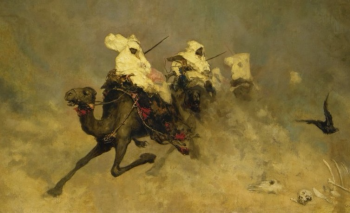 So wrote Robert Musil in Man Without Qualities, describing the atmosphere in turn-of-the-century Vienna.

The historian Carl Schorske used Musil's "cavalry camel" passage to open the third chapter in his famous Fin-de-siècle Vienna. Written over the 1960s and 1970s, Schorske's book explained why the intricacies of Viennese high culture should concern readers of his own time, in which "liberals and radicals, almost unconsciously, adapted their world-views to a revolution of falling political expectations."

Now a mood of pessimism—sometimes of impotence, sometimes of rigid defensiveness, sometimes of surrender—settled over an intelligentsia that, whether centrist or radical, liberal or Marxist, had for several decades been united in social optimism.

Schorske noted how some liberals who had never given a whit for religion became enamored with "neo-orthodox Protestantism," and how "patrician wisdom" overtook "ethical rationalism." In short, what had once been left behind was laid in front like new track.

A while ago I went to see Black Panther. The best part was hearing the audience address the screen as though the characters could hear them. It reminded me of the descriptions of cinema's earliest viewers, who fled from their seats at the sight of an oncoming train on the screen.

We have a president who watches the news and calls into the news and tweets the news and is the news. So perhaps King T'Challa does hear. I feel like he even said as much at some point, in response to an outcry from the audience.

Apparently, a good many clock radios in Europe are running three to six minutes slow these days. The German press calls it "Weckergate" (Alarm clock-gate). It has something to do with a conflict between Kosovo and Serbia over payments for electricity in areas of Kosovo where Serbs are in the majority. Somehow this makes a lot of clocks run slow, including German ones.

A day after "Alarm clock-gate" swept the German headlines, it hit the Austrian ones. The day after that, the English-language ones.

Last year I was talking to a novelist who told me about a hospital where staff were apparently experimenting with a novel form of treatment for Alzheimer's and dementia. They surrounded patients with artifacts from half a decade earlier. Supposedly this made them feel more at home and many started to show greater vitality.

A few months later I read about how a doctor had brought an East German moped to a nursing home in Dresden. The residents rushed over to it, eager to explain its parts and how they worked. Taking the cue, caregivers then scoured flea markets to fill common areas with objects from the GDR: soap, kitchen equipment, a telephone. "Since we have the new spaces, people who used to just lie in bed can suddenly butter their own bread and go to the bathroom by themselves."

I send these articles—as I come across them—to the writer, who replies gratefully, and says the idea appeals to him as he contemplates writing a new novel.

Monday, July 2, 1990 (Diary Entry): "Germany has economically reunified. […] Somehow I feel as if I personally have lost one of my most treasured images. Nothing is foreign anymore. Everyone wears Western clothes, speaks English, and enjoys Western comfort. […] We are slowly becoming clones of a questionable system."

The above was written by myself at age 15.

There is a certain danger in comparing the unfolding of history with the speed of a cavalry camel. Putting aside the question of just how fast a cavalry camel goes, we can nonetheless well imagine that once something as large as a camel gets going, it's difficult to stop. So perhaps the problem is not the speed of the camel, but rather its momentum.

Musil himself had this very problem: he never managed to finish Man Without Qualities.