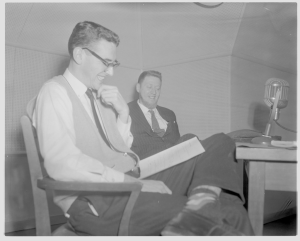 About this time last year, the idea came to me that it was time to write a conservative manifesto. Conservatism had shown itself to be hollowed out and practically free for the taking. Fiscal conservatism, "family values," and sincere deference to Christian morality had either never truly been part of conservatism's essence, or were betrayed wholesale during the election. What remained was an empty vessel awaiting content. Drafts of the manifesto proliferated on my hard drive. In conversation with confidants its completion seemed immanent. Interlocutors wondered about practicalities: What would be the first line? And the last? How would it be disseminated? What would be the next step after the manifesto?

But it never came to be. The problem had a name: Peter Viereck. He was both the inspiration for the manifesto and the reason it was never finished or disseminated.

In April 1940, Viereck had written his own conservative manifesto in the form of an essay titled "But—I'm a Conservative!" The title had two meanings. The more obvious one was a reaction to the prompt Viereck was given by the editors of The Atlantic. Tell us "the meaning of young liberalism for the present age," they urged him. To this the twenty-three-year-old Viereck replied: "But—I'm a Conservative!"

The second meaning was personal: "But—I'm a Conservative!" Its origins were more obscure, but those in the know would have caught it. Viereck's father, Sylvester Viereck, was a fairly famous poet, and an unrepentant fellow traveler of the Nazis. The elder Viereck claimed that anti-Semitism was not essential to Nazism, and that an American version of Nazism could simply jettison the German Nazis' preoccupation with the mass expulsion and extermination of the Jews. But the young Peter was not convinced: Nazism was anti-Semitism, and "Political anti-Semitism is no isolated program," he wrote, "It is the first step in an ever-widening revolt of mob instinct against all restraints and liberties. It is the thin opening wedge for the subversion of democracy, Christianity, and tolerance in general." The son yanked hard to pull conservatism out from under his father and the Nazi Right, insisting vehemently and repeatedly that Nazism was an ideology of revolt, the very opposite of conservatism. And like Marxism's "materialistic assault on all our non-economic values of the spirit," he found it revolting.

Like his father, Peter Viereck was a poet, and before the decade was out he would win a Pulitzer Prize for his work. By then his elder brother, George Sylvester, was dead, killed in action while fighting against the Nazis in Italy. Their father got the news while doing time for sedition.

Decades later, friend and colleague Joseph Brodsky would write a poetic preface to a collection of Peter Viereck's "Last and First Poems," Tide and Continuities:

[…] He saw
more of humanity's seesaw
than you who will peruse these pages,
heart-rending, gorgeous, outrageous

One of Viereck's poems, "Benediction," distills his relationship with his father to a few stanzas in his signature poetic voice, marked by charm, self-referential rhyme-ity-rhythm, and Nabokovian tricksiness.

When the first vague years, the years of ques-
tions and toys,
Resolved into years of the boy with his nose in
old fable,
It was good to hear a father's voice
Across the lull of the breakfast table.
When the second fate, the years of answer and
choice,
Diffused into years the youth on the parapet,
Where maps went rainbowing round such
tallness
In outspread vally of my whim,
Then earth was good in multicolored allness,
And I loved all of it. But loved not him.

Viereck's father haunted both his son's poetry as well as his politics. The young poet came to conservatism as a reaction against the Nazism of his father, but also because he shared his father's disdain for Marxism, which was then popular among his fellow Harvard young stars. "Why should any young man want to be a conservative, on a globe where so much needs changing?" he wondered at the start of his 1940 essay. "Marxism means many things. I revolt against its ‘revolt' primarily for its materialistic assault on all our non-economic values of the spirit. Economic values alone make life possible, but the moral, aesthetic, and intellectual values alone make it worth living." He would later write that a government should aspire "to make all its citizens aristocrats." By that he meant Edmund Burke's conception of aristocracy:

To be bred in a place of estimation; to see nothing low and sordid from one's infancy; to be taught to respect one's self; to be habituated to the censorial inspection of the public eye; to look early to public opinion; to stand upon such elevated ground as to be enabled to take a large view of the widespread and infinitely diversified combinations of men and affairs in a large society; to have leisure to read, to reflect, to converse; to be enabled to draw the court and attention of the wise and learned wherever they are to be found; to be habituated in the pursuit of honor and duty.

Despite the Burkean overtones, there was more than a little German idealism in Viereck's thinking. In that respect he was still very much his father's son. "What do I mean by ‘conservative'? Conservatism must include what Thomas Mann calls humanism: the conservation of our cultural, spiritual, and individualist heritage."

"But—I'm a Conservative" was followed by a series of other works seeking to give conservatism a humanist face. This makeover won some converts, but no sooner had he breathed new life into conservatism than it took on a life of its own. Its two new postwar champions were Joseph McCarthy and William F. Buckley. This spawn was revolting to Viereck in a whole new way. From his review of Buckley's book God and Man at Yale (1950): "Is it not humorless, or else blasphemous, for this eloquent advocate of Christianity, an unworldly and anti-economic religion, to enshrine jointly as equally sacrosanct: ‘Adam Smith and Ricardo, Jesus and St. Paul?' And why is this veritable Eagle Scout of moral sternness silent on the moral implications of McCarthyism in his own camp?"

A New Yorker profile of Viereck by Tom Reiss published in 2005, shortly before Viereck's death, attempted to excavate the political trajectory of this "first conservative." What horrified Viereck most of all, Reiss argued, was the way conservatism was being taken over by an asinine monied elite: "Conservatives, [Viereck] wrote in 1955, are ‘trying to overthrow an old ruling class and replace it from below by a new ruling class. . . . The new would-be rulers include unmellowed plebeian Western wealth'—here he singled out Texan oil money—‘and their enormous gullible mass-base.'"

The "irresponsibility" of this "conservatism of the pocketbook," Viereck wrote in his Conservatism: from John Adams to Churchill from 1956, "far from being a bulwark against revolution, … often provokes revolution." "More responsible conservatives […] defend property, their material base, only when linked with a moral base: service to the community." In the absence of such "responsible conservatives," Viereck gave up on holding conservatism to a humanist course. After the 1950s, he rarely wrote anything but poetry.

Several years ago I mentioned Viereck to one of my students, Pete Devlin, who later did an independent study for which he read the bulk of Viereck's ouevre. In a brilliant final paper, Devlin noted a pattern in Viereck's thinking: "He loves paradoxes, rhetorical flourishes, and counterintuitive arguments. He argues that materialism needs idealism to achieve its goals, ‘pragmatism is unpragmatic,' […] one must resist hysteria and ‘hysteria about hysteria,' the right has a ‘rootless nostalgia for roots.'" Given this propensity, perhaps it is little wonder that Viereck's version of conservatism never became popular. In fact, he would likely have been troubled if it had. Viereck's take on populism: "the thought-control dictatorship of some plebiscitarian demagogue of status-resentment." In his 1949 book Conservatism Revisited, he wrote that it was Nietzsche who first recognized the malaise of "mass-man." "He associated him with nationalism and with worship of quantity and power, as opposed to quality and thought."

So when conservatism emptied out so completely last year, I thought of Peter Viereck's 1940 conservative manifesto. Conditions seemed ripe—as they had been in his time—for a conservatism with a humanist aspect, a keen sense of responsibility, and an aesthetic sensibility. It remained only for someone to step in and make it humane and poetic again. But there is a line in a poem Viereck wrote in 1938, barely out of his teens, that counsels against such optimism.

How it will end is clear. But when, but where?

If only I could believe that it would be different this time, I might finish the manifesto.