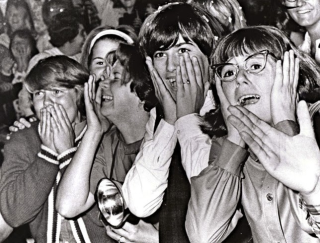 *The Trump presidency continues shifting Foucualtian microtechnologies power, including the reinforcement select biopower apparatuses around immigration and race but, despite this, has thoroughly betrayed earlier promises to disrupt capitalism!

*Yes, it is a major bummer that the Magnificent Markle won't be going by the title "Princess Meghan," thereby ruining the theme of many a birthday party, but at least the Windsor Castle clan can finally begin weeding out the hemophilia and polydactylism.

*The funny man from frigid Minnesota is in some serious hot water. And we're not talking about Lou Grant! Serial molester/groper/tongue-down-your-mouther/sleep-therapist-from-Hell Al Franken resigned from the Senate last week after a cohort of his peers pressured him to step down. Sadly, frothing, myopic Dems who value scoring political points and cocktail party Suart Smalley impersonations more than challenging America's ingrained misogyny could not be consoled by the great equalizer: Minnesota's Democratic governor is filling Franken's seat, which won't even be contested for nearly a year, so there's plenty of time to install and establish a new incumbent. No matter . . . the party's Kardashian wing values appearances over everything else, and is working fervently to remind each and every last American that so long as Franken didn't rape and murder toddler cancer patients, he's way, way better than Roy Moore!

*Chester Cheeto in Chief, a.k.a. Little Hands of Doom, a.k.a. Donnie Dinger Hump-n-Trumper publicly announced that the United States now recognizes Jerusalem as Israel's capital and will soon be moving its embassy there. This made a lot of Christians and Jews happy while pissing off a lot of Muslims, but as Meatloaf so poignantly reminded us, "Two Out of Three Ain't Bad." Then again, a happy little sinner like yours truly should probably be concerned about anything that might speed up Christ's return. I mean, I can live with missing the Rapture if I can still dance to Blondie's version of it, but I fear that it could lead to a major fashion faux pas as I have no idea what all us atheists are supposed to wear when we get vacuum sucked down to Hell. But hey, at least no one down there'll be voting Republican!

*Meanwhile, Mr. No Smiles, Secretary of the ExxonMobil Corporate State Rex Tillerson says the U.S. is not moving it's embassy from Tel Aviv to Jerusalem this year, and almost certainly won't next year either. Mr. Little Donnie Donnie Poo Poo even already signed the pro forma, semi-annual security waiver that prevents such a move, which presidents have been signing for decades. No wonder Sexy Rexy's about to get shit canned!

*Quickie Poll: What's your favorite form of nostalgia?
A) Classic Rock radio
B) ESPN Classic Television
C) Listening to old people complain about Political Correctness like it's still 1992
(Results below)

*Speaking of Hot Takes, it doesn't get much hotter than the wild fires in Southern California burning down all those homes, some of which probably never should've been built to begin with but, oops, I guess that's what happens when you turn the dessert into an endless suburban sprawl. It's a shame SoCal can't steal water from the rest of the state and region fast enough to douse all those pesky flames that crop up from time to time in a hot box full of dry, natural tinder. Go figure! But I'm glad those horses are safe.

*Still trying to tally Donnie Hairpie's endless rain drops of dummy dummy lies splashing all around us? You silly billy, Neitzche already told us that "convictions are more dangerous enemies of truth than lies."
Hands on hip, tilted head chagrin and sighhhhhhhhh . . .

*Patone has named purple the Color of the Year for 2018! Why did the New Jersey company specifically pick PANTONE 18-3838 Ultra Violet? They claim it's "what's needed in our world today!" God, could they be more right? And according to its corporate promotional literature, Pantone 18-3838 Ultra Violet "communicates originality, ingenuity, and visionary thinking that points us towards the future" and "the mysteries of the cosmos." Here's hoping this hot new hue becomes super common in the year ahead.

*You know what's already super common? School shootings! That's why when a 21 year old gunman shot up a the hallways and killed two people in a New Mexico high school last Thursday before blowing his brains out, the nation just coughed and excused itself. Oh well, there we go again [insert whatchagonnado shrug here]. But honestly now, these school shootings are so played out. Kinda like Pantone's Color of the Year for 2017, a "life affirming" shade of green it calls Pantone 15-0343 Greenery. Spent!

*Now I know what you're thinking: Perhaps in some small way we can trace this Trumpist moment back to the creepy racist backlash against the silver screen debut of that black storm trooper a couple of years ago. But for now, onto more important stuff like . . . isn't it time they brought back that big hunk ‘o cuteness, jolly ole Jar Jar Binks? After all, nothing lightens the right wing populist mood like a little Saidian Orientalism in the form of an anthropomorphized Jamaican Rastafarian space alien. And kids love him!

*Gosh, can you believe it's already snowing in the deep South? And only a couple of weeks after Thanksgiving. Global warming, my ass. Global White Christmas is more like it!

*And how bout those Millennials? So young, so beautiful . . . if I didn't know any better, I'd say those graying, Viagra-popping, Trump-voting Boomers are getting just a teensy weensy bit jealous. But shame on me, that can't be. After all, they're the greatest generation that's not officially The Greatest Generation. So this Gen Xer says, let's just do what we always do and follow our elders' lead, which for now means blaming and mocking Millennials as we vie for their ever increasing market share!

*Don't you just love [insert product that a corporation has paid me to shill for here]! C'mon, tell me it's not the best.

*Uh oh, you know what time it is . . . It's time to blame someone!
This week's scapegoat is none other than immigrants.
Yup, they did it.

*I see Texas A&M University made a real splash by guaranteeing John "Jimbo" Fisher $75,000,000 over the next ten years to be their football coach. That seems like a real smart move. Football's important, especially at taxpayer-supported public schools! But gosh, isn't it a shame they don't have enough money to pay the players who suffer brain injuries at an alarming rate and occasionally get crippled? Oh well, at least Texas Agricultural & Mechanical University might be better at footballing next year than they were this year. Go Agriculturalists!

*I'm gonna go too. So much style and fun and hipness to keep up on. No time to waste! Gotta jump into some hot winter fashions for all those Christmas and New Year's Eve parties coming up. And also death!

*Quickie Poll Results: "The most painful state of being is remembering the future, particularly the one you'll never have."