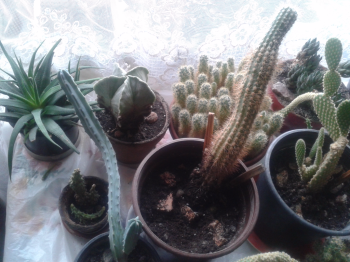 Cacti don't exactly grow on trees in Ukraine. They need a great deal of light or they become deformed. In winter the air temperature has to be maintained at ten degrees Celsius (50 degrees Fahrenheit), which is neither easy nor fun to manage in an apartment. Some cacti require special microclimates with controlled humidity, and most need to be checked almost daily for moth infestation.

I learned all this from the Ukrainian novelist, Andrei Kurkov. A few months ago, a group of us was sitting around a table in the Café Eiles in Vienna when someone pointed out the collection of photographs of famous visitors to the café on an adjacent wall. The conversation turned to collecting: candy canes, baseball cards, chickens… "I had the seventh-largest cactus collection in Soviet Kiev," Andrei submitted.

Many questions spring to mind following such a statement; it's hard to know which to ask first. I opted for "How many did you have?" Hundreds. In his youth, Kurkov's favorite haunt had been the animal market, and especially the cactus section. Since breeding animals and plants was one of the few unregulated economic activities in the Soviet Union, the breeders, growers, and vendors at the market comprised an "oasis" that "did not belong to Soviet reality," he recalled. Soon he joined a local cacti-growers' club and was trading seeds and growing tips with other enthusiasts. "We lived in a small flat," he told us, "only two rooms on the fifth floor and all the windows were covered with shelves of cacti," some from the market, others grown from seed. Hollow plastic building blocks with one side sawed off served as pots, and the young Andrei learned botanical Latin in order to address his protégés by their proper names.

It was during his cactus-collecting phase that Kurkov also discovered the poetry of Osip Mandelstam, Anna Akhmatova, Nikolay Minski, and other offspring of Russian literature's "silver age." Their poems reached him through volumes smuggled into the country by his elder brother's dissident friends (one of whom later died in prison, probably from a beating). The young Andrei would sit and listen to the older boys talk about poetry and bash the Soviet government in the kitchen of his parents' flat. "They were interested in everything that was not allowed," he later told me. "I think I was both frightened and curious. Maybe more curious than frightened." He remembers the time fondly, as one of "poetry and cacti."

At the growers' club he met some of Kiev's top-ranked cactomaniacs, which included an opera singer and a professor at the Kiev Polytechnic Institute, among others.

It was from the opera singer—who consistently boasted the second- or third-largest collection in the city—that Kurkov learned his own collection's rank. He later discovered that the professor, from whom he occasionally bought seeds or learned grafting techniques, was universally despised by his students and prickly towards colleagues, "in love only with cacti." Kurkov paused for a moment after saying this. "These were special people, sometimes strange," he added. "You need very specific concentration to look after cacti."

In the 1990s, Kurkov wrote a novel, Death and the Penguin, whose main character Viktor has adopted a penguin from the zoo. When Misha the penguin takes to moping, Viktor visits a former biologist who diagnoses the penguin with "depressive syndrome." "What you must realize," the biologist tells Viktor, "is that our climate's fatal to creatures from the Antarctic. The best thing for him, of course, would be to be living where he belongs." Misha gets ice baths and frozen fish from Viktor, but his constitution can only take so much of Kiev. Like a cactus, Misha is exotic, adorable, oddly delicate, high-maintenance, and utterly inscrutable; the kind of creature you want to have around, that needs you to survive, but that you know would be much happier and healthier somewhere else.

Didn't Kurkov's parents mind having the apartment taken over by cacti, I wondered. Kurkov shrugged. His father was a test pilot and was hardly ever home, and his mother was glad to see him occupied with something around the flat. The impressive variety and number of books on cacti in his library attest to a certain amount of parental complicity in Kurkov's youthful obsession. Even his older brother was drawn into high-stakes cactusing for a time, having fallen victim to what Kurkov refers to as "a cactus-related incident."

The story is one of small-scale, late-Soviet entrepreneurial capitalism gone awry. Kurkov's brother took trips to the Soviet Socialist Republic of Khazakstan, where he guarded apple orchards in exchange for apples. These he took further east, to Vladivostok, where he sold them and picked up shells on the beach, which he in turn brought back to Kiev, made into jewelry, and sold. In this way, Kurkov's brother had accumulated 600 rubles, a hefty sum in the early eighties, equivalent to roughly six-months' salary. Seeing Andrei's flourishing cacti everywhere, his brother wondered if cacti might not make a good investment. Kurkov assured his elder brother they would. Andrei nursed the several thousand cactus seeds they bought with the money for a while, but the care they required was overwhelming, and most of them soon perished of infestation.

Nonetheless, the demise of Kurkov's own collection came only later, when he was sixteen. Kurkov and his brother spent part of their summers with friends on the seaside in Crimea, drinking unbubbled champaigne from three-liter cartons, roasting mussels, and organizing illegal joke-telling contests, three enterprises for which quantity was favored over quality. There he met and fell in love with a girl from Latvia, and after returning home from vacation, decided to visit her in Riga.

His parents learned of these plans only from a note their son left explaining that he would be away for two weeks, and could they please bring his cacti in from the balcony if the temperature dipped too low? Whether out of vengeance for his thoughtlessness, ignorance of meteorological conditions, an (understandable) aversion to relocating hundreds of cacti from balcony to living room, or some combination of factors, most of Kurkov's cacti met a "Napoleonic" end on that frozen loggia.

Death and the Penguin opens with a joke and is bizarrely comical throughout, but along the way, almost everybody dies. "Dark humor" is a common and apt label for his prose. He attributes the humor to the absurd Soviet optimism of his childhood. "It was as if everyone had read a textbook: Lessons in Optimism," he laughed. So where does the "dark" part of the humor come from, I asked. He spoke of his experience of the post-Soviet period, when friends left in droves for the US or Germany, or were ploughed under by criminal gangs or the protection mafia: one friend, who had helped out with a loan to pay for the printing of Kurkov's first book, was murdered. Another later asked Kurkov whether he was still an optimist. "I am," was his reply, "but I'm a dark optimist. I know that everything will be fine in the end, but I'm not sure that I will live to see it."

When Kurkov goes back to his parents' flat now, there are a few tenacious specimens from his original collection still perched on a windowsill. But he's not nostalgic. "I cannot go to Crimea anymore. There are no joke-telling competitions there anymore. Riga is in another country now. In the eighties that girl got married and I lost track of her," he told me, almost cheerfully. "Every age has its possibilities." Or, as Viktor thinks to himself when contemplating Misha the penguin's illness, "All was well, or appeared so. To every time, it's own normality."