The word “robot” is Czech and entered 20th Century discourse in R.U.R. (Rossum's Universal Robots), a play by Karel Čapek that premiered in Prague in 1921. It was staged in London in 1923 in English, and in Tokyo in 1924 in Japanese. A Japanese ten-year-old named Osamu Tezuka read the play in 1938 and thirteen years later he created the most famous robot in Japanese culture, Tetsuwan Atomu, Mighty Atom, aka Astro Boy in English. Čapek’s play was a response to industrialization; Tezuka’s manga was a response to the Allied Occupation of Japan. Čapek’s robots were not electro-mechanical devices; they were organic, but constructed, like Frankenstein. They were created to serve humans as workers, but they rebel and, in time, kill all humans save one. Tezuka’s conception is quite different; his robots are electro-mechanical, but many of his stories center on social tension between humans and robots.

Though Tezuka hated WWII, he was a patriotic Japanese and expected Japan to win the war. Near the end of the war he created an unpublished comic in which Japanese and American comic strip characters fought one another (Frederik Schodt, The Astro Boy Essays, 2007, p. 27). After the war he continued his medical training while beginning to publish manga, publishing New Treasure Island in 1947, which is reputed to have sold 400,000 copies. He experimented with science fiction in Lost World, Metropolis, and Next World. He introduced Mighty Atom as a secondary character in 1951, and then gave him his own title in 1952. 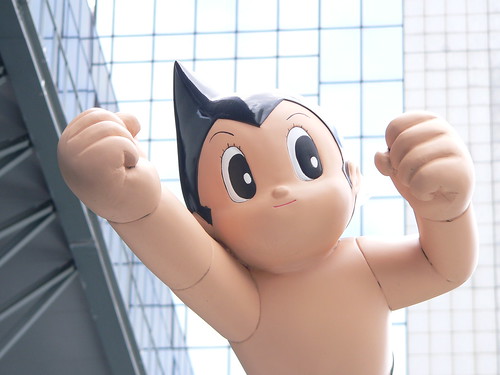 While he had some misgivings about whether or not his primary audience, Japanese boys, would be able to identify with a robot, those misgivings were groundless. Mighty Atom was a success. He published Mighty Atom stories continuously from 1952 through 1968, and a few thereafter. In the 1960s he created an animated TV series that was almost immediately exported to the United States as Astro Boy. During the 1980s he created fifty-two anime episodes in color, most of them based on stories in the earlier anime series or in the manga.

Tezuka set Mighty Atom in a future world with advanced technology. Space travel was routine, as was undersea and deep earth exploration. Mighty Atom was the size of a ten-year-old boy, more or less, but had a 100,000 horsepower atomic energy heart, an electronic brain, search light eyes, super-sensitive hearing, rockets in his legs, ray guns in his fingers, and a pair of machine guns in his posterior. He attended primary school, where he was often teased for being a robot, and lived with robot parents and a robot sister. He was particularly close, however, to two middle-aged men. Dr. Elefun was head of the Ministry of Science and created Atom’s parents and sister; he also repaired Atom. Mr. Mustachio was Atom’s teacher in school. Both men worked closely with Atom on his various missions and adventures and offered him sage advice.

The key point is that most, if not all, of the Mighty Atom stories involve tensions between humans and robots. I’ve already mentioned that Atom was frequently teased and bullied by his classmates. Since robots could not harm humans – that’s their nature – he had no choice but to put up with it. That’s a recurring motif. But consider a specific story, “Robot Land,” which exists in three versions, the manga version, and a version in each of the two anime series (I’m familiar with the manga version and the version in the second anime series). Robot Land is a theme park, much like Disneyland (and there are explicit Disney references in the story), except that all of the attractions feature robots. But that’s just the innocent surface. Underground, robot slaves manufacture weapons. All of the robots are poorly treated by the human owner. Atom, Elefun, Mustachio, and Atom’s classmates are all involved in defeating the owner and liberating the robots.

In “The Death Balloon” a criminal named Skunk sends Atom look-alike balloons into the air which then explode, injuring and killing people and destroying property. Skunk is doing this at the behest of a mayoral candidate running on an anti-robot platform. The story of the “Robot Stuntman” tells of a small robot who does all the stunts for a human actor, but is kept captive in a case and given no credit for his work. In “A Robot President” Atom has to protect the newly elected president of a foreign country from evil forces that want to destroy him precisely because he is a robot. In yet another episode, Atom comes to the defense and rescue of discarded robots. And so on and so forth.

Now, why did these stories prove to be so popular in post-war Japan? While the question demands a multi-faceted answer, I want to focus on only one aspect. Consider this passage from Frederick Schodt, The Astro Boy Essays (pp. 120-121):

Writing in the Tokyo shimbun newspaper in 1967, Tezuka explained that Mighty Atom was really about the chasmic misunderstandings and problems that might occur between man and robot in the future. “I never intended,” he wrote, “to create a story set in the twenty-fist century about a glorious scientific civilization.” He was, instead, inspired by his frustrating and humiliating experience at the end of the war, of having been beaten by a group of American GIs because he could not communicate with them effectively in English.

Tezuka cannot have been the only Japanese who was humiliated by occupation troops. Such experiences must have been quite common. Above and beyond such specific experiences, however, is the fact that Japan lost the war and, for the first time in its history, was subjugated to and occupied by foreign powers. A dedicated nationalist and militarist would have experienced the occupation as unmitigated humiliation and evil. Tezuka’s experience, I imagine, would have been more complex. According to Schodt, he felt deceived and betrayed by the government. He may not have liked the war, he may have hated the people and forces who led Japan into war, and he may have understood and even appreciated the necessity of post-war occupation. But that doesn’t mean he would have liked the occupation. He must have been deeply ambivalent.

Atom himself is the focus of most, if not all of the stories (some center on his sister). He’s the most advanced robot ever built, and saves individuals, his friends, and the entire earth from disaster many times. Yet he’s cheerfully obedient to Dr. Elefun and Mr. Mustachio, who give him sage advice and encouragement. That is, he is at one and the same time both the most powerful one and a subordinate. All three of this central trio constantly proclaim both that robots are the equal of humans and that robots exist to serve humans; robots are categorically different from and politically subordinate to humans. By their nature robots serve humans, but the obligations of humans to robots must be established by special laws, which are a running motif in the series. Robots are subalterns in the world of humans. And for all his charm and power, Atom is but an earnest child.

Tezuka published most of the Mighty Atom stories in a boys magazine, Shōnen. Yet, Schodt asserts (2007, p. 43), the audience for the stories was unusually large and diverse, noting that “An add for the books in the Tokyo shimbun newspaper that year [1964] ran testimonials from a novelist, a university professor, and even a sumo wrestler, all of whom not only recommended the books for children, but unabashedly and publicly declared that they loved to read them themselves.” Schodt also notes, in a recent interview, that “the borderline between children's culture and that of adults has always been more blurred in Japan than in many other countries.” Thus I can’t help but wondering if there had been an adult audience for these stories from the beginning, perhaps not as large as the child audience, but real and substantial. It’s worth remembering that cartoons, whether in print or in film, did not originate as a child’s medium and did not function that way prior to WWII. The idea of cartoons as inherently for children is a post-WWII phenomenon of the West.

While Japanese children could read the stories as parables about their position in a world run by adults, their elders could read them as parables about Japan’s position in a world dominated by people of another race from across the sea. By the time Tezuka died, 1987, however, Japan had established itself as an economic and technological power on the world stage. The Mighty Atom had become deeply embedded in Japanese popular culture; manga in general had grown well beyond the child audience; and anime had become well established as well. Robots and cyborgs had become ubiquitous figures in Japanese popular culture.

Let us conclude with a statement by the artist Takashi Murakami in his introductory essay to Little Boy: The Arts of Japans’s Exploding Subculture (p. 148):

Robots are refined to a level at which they compensate for the inadequacy of human communication, expand human capabilities, and even possess self-consciousness. With the aid of such robots, humans can evolve into superhuman New Types. People themselves become a black hole: life in death, transformation, repeated mutation. Thought stops and the child never grows up. Sucked in by kawaii, you lose initiative, or laugh at your own lethargy and take a robot for a real-world partner. And yet, amidst it all, people awaken and evolve toward a new humanity.

While it would be foolish to attribute these developments entirely to stories of a boy robot (who was a bit androgynous – but that’s a different aspect of the story). It would be equally foolish to pretend that such stories played no role in the socio-cultural dynamics that allowed the post-war transformation of Japanese culture and society. Just how to tell a story that avoids these foolish alternatives, that is not so obvious.