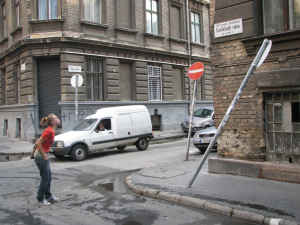 A few years ago someone took a photograph in Budapest of a slight young woman blowing on a street sign that appears to bend under the superhuman force. From a passing car an astonished driver looks on. The woman is Suzi Dada. She's funny, but her superhuman strength is real, and it's serious.

Dada is forever getting into the right kind of trouble. She's been confronted by police, the Hungarian secret service, and members of the extreme right party Jobbik. Unable to rely on her parents for support since starting college around the turn of the millennium, she has long been independent and self-reliant, not to mention a free radical. It took her nearly ten years to finish her university degree in history and education, but during that time she started an underground art group called Szub-Art Club for the Support of Contemporary Artistic and Subcultures, and co-founded a prankster street art group known as the Two-Tailed Dog that has since become a locus of opposition to the nationalist, anti-pluralist government of Viktor Orbán. Her attitude about almost always being the only woman who's doing what she's doing is, “I don't do it as a woman. I just do it.”

Suzi went to university in Szeged, a quiet college town near the Serbian border with a good cinema, very good ice cream, and a lot of students. Back in the 1990s, many of them were looking outward while reflecting inward: devouring literature, learning languages, hosting concerts and dance parties, and traveling the world every chance they got. In the 2000s, Dada's generation got into electronic music, extreme sports, and street art. These subcultures were little known and barely tolerated in Szeged, so Suzi organized a demonstration of skateboarders' skills for local retirees who had hitherto viewed the youngsters as “street kids with baggy pants,” rather than the winners of international skating competitions that many of them were. 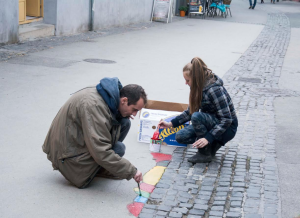 Dada recalls how, “because it was a small city, you could get to know everybody, and a vibrant, mutually supportive atmosphere was possible.” Her Szub-Art group was involved in everything from graffiti and environmentalism to skateboarding and trash collecting; it was a grassroots organization with a shifting cluster of active members. “At the university I met people for the first time who think like me,” she recalls.

Her most fateful encounter was with a young sociology student named Gergely (Gergő) Kovács while looking for a flatmate. The two-bedroom apartment they later shared became the informal headquarters of the street-art and prankster collective known as the Two-Tailed Dog. Together with a broader circle of friends, they sat in the apartment and made jokes, and “if it was good, maybe something came of it.” Kovács claims Szeged (whose population reached its peak around 1990, with nearly 170,000 inhabitants) was the perfect place to do street art. “There are about 20,000 students at the university and they have 27 hours free time every day.” An appreciative audience was always on hand.

A visitor to the town in the 2000s could see the work of the Two-Tailed Dog everywhere: a spray-painted weasel with a jackhammer pounding away at an already cracked façade; a spaceship station on the embankment along the Tisza River announcing daily departures to various extra-planetary destinations; a sign calling on the government to relinquish some territory to neighboring states in order to keep the country a reasonable size and nationally recognizable shape… The Dog made Szeged into a place where you had to be prepared to laugh at what you saw, and to see it differently. 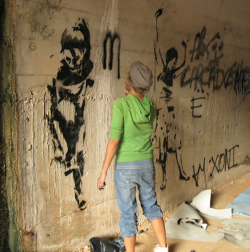 Suzi's younger sister is among the six percent of Hungarian citizens who have left the country in search of adventure, opportunity, or escape. In Germany, her sister says, when they have a problem, they set to work to solve it. Yet sometimes a problem seems so overwhelming that the German approach feels inadequate. “What's missing is the sense that you know you have a problem and part of the problem is that you can't come together to solve it, so you have to laugh at it first rather than falling into despair,” Dada told me. “We should know how to laugh at something together. Not hatred, not despair, but maybe laughter is the beginning of action.”

Although the Two-Tailed Dog is still undeniably funny, lately they have also been more directly involved in doing; working with civic organizations on beautification projects and a variety of initiatives against hatred, discrimination, and corruption in politics. They troll the humorless Orbán with billboards and posters that mock his fear-mongering public-relations campaigns. In 2015, when Orbán's government put up billboards addressed to incoming migrants and refugees and initiated an anti-migration referendum critical of the EU, the Two-Tailed Dog countered with its own billboards and mock-referendum.

The Government The Two-Tailed Dog

“We do things differently now than we once did,” says Dada, who belongs to the group's triumvirate presidency. “Now we joke around more seriously.” Another member of the top brass has described the Two-Tailed Dog as a gate through which anyone can enter. “It's also meant as a way out,” Dada insists, “into a free realm where action is possible. My true, serious political ideal is the active, creative citizen.” 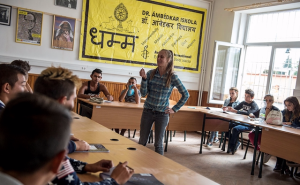 György Schöpflin, a politician in the prime minister's governing party (Fidesz) who has spent most of his life and career in Britain, Italy, and Brussels, recently described a “good Hungarian” as someone who stays in the country and works. By his own standard, Dada is a better Hungarian than he is. For almost a decade she has taught at a Buddhist high school in northern Hungary, roughly the equivalent of teaching at a Montessouri school on a South Dakota Indian reservation. Many of her students are poor and Roma (Gypsy) in a region of Hungary with one of the highest proportions of extreme right voters in the country. “It's a very difficult task we've taken on,” she says, “the kids come from severely disadvantaged backgrounds, and the extreme right party actively opposes what we do. So teaching is like a perpetual struggle.” The Orbán government has also passed legislation that keeps poor students at a disadvantage by requiring kids to attend school only up to age sixteen and providing scholarships overwhelmingly for vocational training and only rarely for college-oriented education. “But we've also had a lot of successes,” Suzi adds, “and it's always exciting, if exhausting work.”

Nowadays it's fashionable to claim victim status (even white male millionaires are doing it), but the slogan of the Dr. Ámbédkar School where Suzi teaches takes an altogether different tone: “I am responsible for my fate.” A recent German-Austrian documentary about the school showed how it managed to increase the number of local high school graduates considerably, but still only a quarter of those who start make it to the finish. “If it were easier,” Dada reflects, “I probably wouldn't do it.”