"Reduce your household duties! Women who are not afraid to roll up their sleeves and do jobs previously filled by men should call the Langley Memorial Aeronautical Laboratory." In 1935 the National Advisory Committee for Aeronautics (the arm of the US government dedicated to research and development in the new-fangled area of human flight) hired its first cohort of women computers. This was before calculations could be done effectively by machines. If you wanted equations solved and numbers crunched you needed a person who was quick with numbers and deadly accurate. With a talent shortage, and with some reluctance, the those in charge admitted that women might be up to task. When the first women arrived, the male engineers were no doubt reassured by the fact that the women would only have to calculate whatever they were given and wouldn't have to worry their pretty little heads with the actual problem solving and thinking. The women more than held their own.

With the onset of World War II the allies needed every possible advantage. It was clear that winning in the air was key to winning the war. Better, faster, more maneuverable planes were needed without delay. The NACA grew at an exponential rate and needed every clever person it could get its hands on. Word spread and soon black women were also applying for these positions. No surprise since jobs at the NACA paid at least twice the salary of a school teacher, the next best option for well-educated black women.

Now officially this was no big deal. In 1941 President Roosevelt issued Executive Order 8802:

Whereas the successful prosecution of the war demands the maximum employment of all available workers regardless of race, creed, color, or national origin; and

Whereas it is the policy of the United States to encourage full participation in the war effort by all persons in the United States regardless of race, creed, color, or national origin, in the firm belief that the democratic way of life within the Nation can be defended successfully only with the help and support of all groups within its borders; and

Whereas there is evidence that available and needed workers have been barred from employment in industries engaged in war production solely by reason of their race, creed, color, or national origin, to the detriment of the prosecution of the war, the workers' morale, and national unity:

Now, Therefore, by virtue of the authority vested in me by the Constitution and statutes, and as President of the United States and Commander in Chief of the Army and Navy, I do hereby reaffirm the policy of the United States that there shall be no discrimination in the employment of any person in war industries or in Government by reason of race, creed, color, or national origin…

But this was the 1940s and the NACA was located in the deeply segregated Virginia. The black women who took these jobs had to navigate narrow waters. They faced the double stigma of being women in the overwhelmingly male world of math and science, and being black in the segregated south.

Despite the challenges, these women played a pivotal role in the development of aeronautics both during the war and during the decades which followed. Not just as computers, but as engineers and as research mathematicians. For example, it was Katherine Goble Johnson's calculations which showed that a mysterious crash was due to the plane crossing through the turbulence caused by another plane several minutes earlier. Until her work nobody realized that this was something to worry about. Keep her in mind the next time you're sitting on the runway waiting to be cleared for take off! 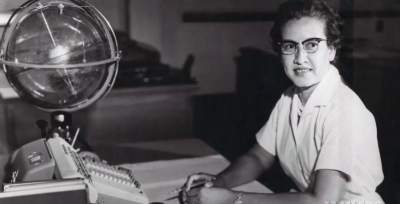 Katherine Johnson at her desk [1].

In her recent book, Hidden Figures, Margot Lee Shetterly tells the story of these women. Like the best history books, it manages to tell a story at multiple scales at once. On one level it is the personal story of a remarkable group of individuals and all the challenges they faced. But simultaneously it is the story of World War II, segregation and race relations, the cold war, and the space race.

Here is one example which captures both the small and the large of the story. To satisfy Virginia law one table in the cafeteria was marked with a sign which read Colored Computers. It was a daily reminder that they were black women first, regardless of the excellence of their work. In an act of protest Miriam Mann stole the sign whenever a new one was set out by the cafeteria staff. Eventually the cafeteria gave up on the idea of having a sign.

Parts of their story resonate today. Shetterly writes about the Red Scare hysteria in the early fifties when accusations of communism were used as weapon against anyone who didn't support "traditional" American values. If you supported ideas like civil rights and equality for women you risked being accused of disloyalty. Sadly, using baseless accusations as a political weapon sounds awfully familiar. NACA employee Matilda West was fired amid rumors that a black computer and several engineers were caught burning their loyalty forms. Those times still echo. In both Georgia and Oklahoma I was required to sign a loyalty oath in order to be employed by the state.

Happily, Katherine Johnson has lived long enough to see how much things can change. In an event which was unimaginable when she started at NACA in 1953, last year Mrs. Johnson received the Presidential Medal of Freedom from President Obama. She received it for her pivotal role in the US space program, including Alan Shepard's first orbit around the Earth, the Apollo missions, and the Space Shuttle program. When a mechanical computer was used to calculate John Glenn's orbit in 1962, he refused to fly unless Mrs. Johnson personally double-checked the results. Sadly John Glenn was one of the many we lost in 2016. Katherine Johnson is still with us at age 98 and is charming as ever. I highly recommend watching this interview with her. She is definitely LEGO worthy: 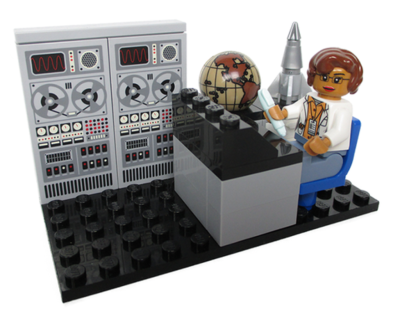 Katherine Johnson at her desk [3].

Katherine Johnson and her colleagues knew the importance of getting the math right. Not only because lives were at stake, but because they always had to hold themselves to the highest standard. As Shetterly writes,

Their facilities might be separate, but as far as the West Computers were concerned, they would prove themselves equal or better, having internalized the Negro theorem of needing to be twice as good to get half as far.

The women mathematicians of NACA were remarkable in every sense and are a true inspiration. Hidden Figures should be on your reading list for 2017. If you'd like to see the Hollywood version of the story, a film based on the book is out now. You can see the trailer here.

Also check out the Human Computer Project, a website dedicated to the women of early aeronautics.

[2] A family photo of Miriam Mann from here.

[3] From the Women of NASA LEGO set. Hopefully available soon!