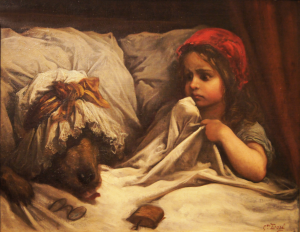 An early version of Little Red Riding Hood comes to us from the Frenchman Perrault. In 1697, he published the story in a collection of others. It ends with a moral: “Children, especially attractive, well bred young ladies, should never talk to strangers, for if they should do so, they may well provide dinner for a wolf.” Any story with a moral sets a limit on the reach of progress; the moral implies that the problem confronted in the story is a recurring one. In a little-known annex to the version published by the Brothers Grimm over a century later (in 1812), Little Red Riding Hood, having been eaten by one wolf and saved by a huntsman, is confronted with a second wolf and her knowledge is put to the test. The girl not only repels his advances, she drowns him in a barrel of sausage-smelling water. The lesson has been learned.

But only Little Red Riding Hood has learned it. Although the wolf in the story dies, wolves in general remain at large, and so the tale has to be retold. There will be other young girls who will face other wolves. This fact is not meant to drive us to despair, but to avert a danger. The problem cannot be solved once and for all time, but it can—by means of wisdom imparted before the threat appears—be flagged, so that when some little girl stares a wolf in the face, she won't fall into his trap. Even without concrete experience the girl can learn a lesson.

The fairy tale belies that there can be any progress beyond the personal, but the fact that the story exists and is meant to be handed down as wisdom means that, although wolves have not been abolished, every generation need not perpetually succumb to their tricks. There is another problem, however: since Little Red Riding Hood is saved—variously by a huntsman and a woodcutter—the tale also gives the impression that the danger may not be so great after all. No matter which version you read, the tale promises justice: Little Red Riding Hood lives and the wolf dies. So when the story is told and the little girl gets eaten by the wolf in spite of being warned, and furthermore, no woodcutter or huntsman comes to cut her out of the stomach of the wolf, the scenario is fertile ground for despair.

The tale even primes us for this despair, because for Little Red Riding Hood, there is no better imaginable scenario than one in which nothing bad happens. It's not as though the tale promises little girls transcendence or socio-economic mobility. It only aspires to help them to fend off an almost inevitable danger. If it is successful, that particular harm will have been averted. The tale aspires, at most, to zero, or to the maintenance of the status quo.

We are living in an age of fairy tales insofar as all of our stories about the workings of the world are “zero” stories. We are primed to expect disaster and seek at best to hold our ground. In the case of climate change, with hard work, international cooperation, and constant vigilance, the disaster may not reach the proportions we fear, but there is no conceivable path even to zero, much less to plus: it's only a matter of minus five versus the otherwise-inevitable minus ten. Inequality is also a sub-zero issue; it poses a problem that can only be ameliorated, never eliminated (much less transcended). Approaching zero is impossible, so the goal of getting closer to zero in order to avert the catastrophe that will otherwise ensue is the best we can do. Terrorism: sub-zero.

Even “Make America Great Again” is sub-zero, because it aspires only to move from a state of presumed decay back to a status quo ante, to unscramble the omelet. It abhors the present and looks forward to the past. It can only “make progress” toward recreating the conditions of the past. The Bible offers a comparable fairy tale with a transformation of the wolf's very essence at the end of days (“In that day the wolf and the lamb will live together; the leopard will lie down with the baby goat. The calf and the yearling will be safe with the lion, and a little child will lead them all.” Isaiah 11:6). That, too, is a “zero” story, one that longs to return to a mythical foretime in the Garden of Eden, when wolves didn't eat lambs and leopards didn't eat baby goats. In none of these scenarios can we imagine a “better” future, only one that is less horrific than the future we imagine, one like the past. The writer Georgi Gospodinov recently related an anecdote:

Once my daughter was playing teacher in her room and asked her toy animals: “Kids, how are you today?” And then, passing behind their backs, answered: “Better than tomorrow.” Probably this was just a mistake. “Better than yesterday” is what we usually say. “Better than tomorrow” implies a higher alert level. We are frozen at a point when our future is more disturbing than our past.

The wolf will always be lurking in the forest, he will always be hungry, and the little girl will always have to walk through the forest to get to her grandmother's house, so she must be ready to recognize the wolf when she sees it. Last year, a student of environmental science told me that he felt as though he was waiting for something to happen. Climate change is clearly real, but the enemy is everywhere and nowhere. He wanted it to show its face. To test whether we have learned the lesson, the wolf must appear.

Things have come to a pretty pass when the most we dare to hope for is that the wolf will turn up at the door. In the last century, utopian ideologies on both political extremes imagined making progress towards a future that was to be fundamentally different from the past. Today we seek the opposite: to make progress against the future, keeping it at bay. Ours is a fundamentally conservative time. This conservatism goes beyond politics; pushing back against the future is now a common reflexive gesture. Imaginative energy is consumed by damage control on the one hand and horrific fantasies of large-scale catastrophe on the other. It is an Old Testament time. A time of parables, and of fairy tales.