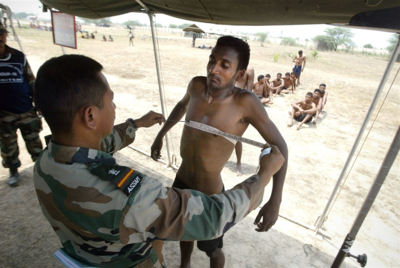 A cloying veneration of army men is yet another pathology of nationalism that’s more pervasive than ever in India today. Army men are now widely seen as paragons of nobility and patriotism. Whether their deaths are due to freak accidents or border skirmishes, they’re eulogized for “making the supreme sacrifice for the nation”. Politicians routinely signal their patriotism by chanting Bhārat Mātā ki Jai, victory to mother India, and fall over each other for photo ops where they’re seen honoring soldiers, dead or alive.

Curiously, this adoration for army men seems most intense in urban middle-class families, including those who don’t desire or nudge their own kids to join their nation’s army. Instead, they want their kids to prepare for more lucrative professions, pursue office jobs in multinationals, live in gated high-rise apartments, and own nice cars. A textbook case of hypocrisy?

These folks may claim that their reverence for army men stems from their appreciation for the sacrifice the jawans (soldiers) make for others by enduring great hardship and risk, even death. And yet these same people certainly don’t glorify other risky jobs that benefit the nation no less, like unclogging the nation’s sewers, mining the nation’s coal, building the nation’s infrastructure, or toiling in the nation’s shipping graveyard—all jobs that apparently have lower pay and benefits combined with higher fatality, injury, and illness rates than Indian army jobs. Clearly, something else animates all that adoration for army men.

And who are the jawans who comprise the majority of the army? Most come from the rural poor and are hired after 10th grade. Some follow in the footsteps of other soldiers in their families, at times going back to British colonial times. As happens in all societies with volunteer armies and a severe lack of equal opportunity, most recruits join to escape poverty, get a stable job and a pension, and pursue a ticket to a higher social class, prestige, and some adventure. Indeed, in recent years, economic distress in parts of rural India has forced army recruiters to lower their physical fitness standards in some centers because the pool of candidates is too undernourished. Though the army does not release demographic data by caste or religion, it is well known that Muslims are severely underrepresented in it—as low as 2-3 percent—raising a host of awkward questions about its commitment to secularism.

And how noble are the jawans? No more and no less so than people outside the army. In fact, the jawans, like soldiers in all armies, get trained and indoctrinated to follow orders and respect hierarchy. This has helped them achieve military successes for the country and conduct laudable disaster relief, but it has also led them to commit horrific crimes against their own citizens, including rapes, tortures, and mass murders, as we know from many well-documented cases in Kashmir, the north-east, and central India. This duality is plainly true. The jawans, like any other large group of people, are ordinary, flawed men just doing a job for low wages, often in difficult conditions—not out of any great love for “the nation”, but in the hope of bettering their lot.

In fact, in 2009 the army chief himself lamented that the army is no longer an attractive career versus India Inc., nor is patriotism a key motivator for the young. Given that those same elites, who claim to be so in love with their nation, have hardly invested in its public education, healthcare, job training, piped water, sanitation, land reform, and other basics, it’s hard to imagine rural folks so brimming with patriotic feeling that they’d choose to go fight on mountaintops for a nation that has failed them and their families for decades. And the lack of patriotically motivated self-sacrifice isn’t limited to the jawans: The Indian army now struggles with an exodus and shortfall of commissioned officers, who comprise about 5 percent of the army.

Glorifying jawans as noble heroes has much to do with the vulgarity and hypocrisy of today’s nationalists. It allows them to take pride in a blinkered concept of “the nation”—which combines blindness to caste (in a caste ridden society) with narrow ideas of nation and religion to form an oppressive majoritarianism—even as they continue turning a blind eye towards the India that most jawans actually come from. They bow before “the nation” as if it were a jealous deity that demands unquestioning obeisance. As the philosopher Arthur Schopenhauer wrote almost two centuries ago, “Every miserable fool who has nothing at all of which he can be proud, adopts as a last resource pride in the nation to which he belongs; he is ready and happy to defend all its faults and follies tooth and nail, thus reimbursing himself for his own inferiority.” By glorifying patriotism, the nationalists—who also thrive on the Left in India, if in milder forms—effectively lower the cost of raising an army to safeguard a social order that protects their own dominant status and privileges. Not surprisingly, few of them see a problem in undermining their beloved nation by participating in its legendary tax evasions.

“Nationalism is an infantile disease,” wrote Albert Einstein. “It is the measles of mankind.” Led by cultural insecurities, Hindu nationalists, like all crude nationalists, have made up fanciful stories about their past. They have invented large and menacing “enemies of the nation” and whipped up fears of our being under siege. They’re promoting a culture of thuggishness, vigilantism, and even encouraging open threats to life and limb against those deemed “anti-national”, mostly outspoken leftist and liberal students, academics, and other intellectuals. They’re targeting prominent Muslims and demanding that they wear their patriotism on the sleeve. In a recent political resolution, the ruling Bharatiya Janata Party (BJP) has made it ‘unacceptable’ to not say Bhārat Mātā ki Jai in the name of freedom of expression. Anupam Kher, a Bollywood actor and prominent BJP supporter whose wife is a BJP Member of Parliament, is using language that has disturbing affinities with fascists around the world. He recently tweeted, “When you use pest control in your house, you see cockroach, insects and vermin popping out of their hiding. This cleanses the house. Likewise, the pest control of the entire country is being carried out at the moment.”

For these nationalists, revering the army is part of the same psychological matrix that values authoritarian father figures, discipline, and symbols of power. Naturally, they dislike those who question the nation’s military spending and the army’s conduct, or who want army men prosecuted for their crimes. As George Orwell wrote, “The nationalist not only does not disapprove of atrocities committed by his own side, but he has a remarkable capacity for not even hearing about them.” It’s worth noting, however, that on average over the last 20 years, only a few hundred Indian civilians and army men actually have died each year from the acts of those hostile to “the nation”—about one in a million Indians, with a declining trend. To put this number in perspective, over two thousand per million Indians die prematurely each year just from poor workplace safety, environmental toxins, easily curable diseases, and malnutrition.

Our nationalists simply do not have a judicious sense of proportion and priorities, largely because they live in a bubble of inflated fear, paranoia, and delusions of grandeur. So much of their love for “the nation” betrays so little love for those who live in it and the egalitarian spirit of the constitution that defines it.