On a Friday night two weeks ago the US Supreme Court quietly announced they wouldn't hear a challenge to a lower court's order that North Carolina should redraw it's congressional districts. There wasn't much point in hearing the case. With Scalia gone the Court was widely expected to vote 4-4 on the case and ties go to whomever won the previous round. The case revolved around North Carolina's Districts 1 and 12. The lower court ruled that they were gerrymandered to pack more black voters into these districts. While gerrymandering is now a worldwide sensation, the US invented it and are true masters of the art.

Even a glance at NC District 12 makes it obvious that some fishy business is at work. A bow-legged cowboy could walk the length of NC 12 without touching either side:

North Carolina is hardly the only offender. Illinois District 4 is sometimes called The Earmuffs thanks to its bizarre shape.

It's one thing to eyeball a district and guess that the ghost of Governor Elbridge Gerry was at work, but I'd rather quantify somehow that a district is overly gnarled. As I pondered this last week I noticed that, in contrast to a nice, compact geometric shape like a circle or square, the long, twisted shape of NC 12 and IL 4 has a lot of perimeter for the given area. A reasonable measure of the disfigurement of a shape is the ratio of perimeter to area. In fact, for reasons we'll discuss in a moment, we want the ratio of the square of the perimeter to the area. Let's call this the distortion of the shape [1]. In formula form distortion is given by:

The reason we use the square of perimeter is that we want distortion to be what a geometer would call “unitless”. We want the distortion of a shape to be the same regardless of which units we use when measuring. Meters, miles, furlongs, and light years should all be equally good when calculating distortion.

To put it another way, we want distortion to measure an intrinsic quality of our shape and not depend on the scale we use. It shouldn't matter if we draw a square big or small when we calculate its distortion. Indeed, a square with side length x has perimeter 4x and area x2. The ratio of these two would be 4/x and would get ever smaller as the square grows in size. It would also vary if were to switch from meters to centimeters to millimeters. On the other hand, the distortion of every single square in the world is 16.

A square is pretty compact, but we can do slightly better. Just as a bubble forms a sphere because this is the shape which minimizes surface area for a given volume, a circle gives us the smallest perimeter for a given area. What's the distortion of a circle? Well, we all know that a circle of radius r has perimeter 2πr and area πr^2 and a quick calculation shows that the circle has distortion 4π (which is about 12.57). On the other hand, using circles to make congressional districts isn't very practical. Whatever their virtues, circles are very inefficient if your goal is to cover a state or country [2].

Our gold standard, then, is the square's distortion of 16. What about congressional districts? How the heck do we find the perimeter and area of crazy shapes like these? Nowadays we have GPS and the like, but not so long ago the planimeter was the height of technology. Like the slide rule, the planimeter is a marvel of mechanical computation. The American Mathematical Society has a very nice article on how planimeters work. 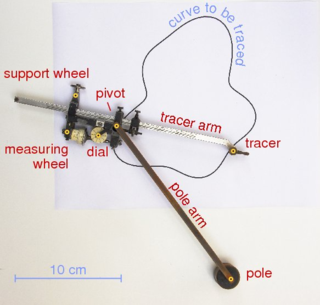 In day to day usage, all you need to do once you've set up your planimeter is follow your shape with the tracer. The measuring wheel turns whenever you move in the direction of the wheel. Once you've done the full loop, you can read off how much the wheel has turned, multiply by the appropriate scaling factor and, voila!, you have your area. How in the world does the number of turns of the wheel measure the area? This is the miracle of Green's Theorem. It says you can integrate across the surface of a shape by instead doing an integral on the boundary. But integrating the constant 1 across the surface gives the area. As the wheel rolls, it's secretly doing the necessary integral on the boundary.

Unfortunately I don't have a planimeter handy. Fortunately I live in the computer age. Through Google you can obtain a map of all the Congressional districts and Google Earth will let you calculate the perimeter and area of any district you like. There are 435 Congressional districts [3]. I didn't check them all, but it turns out to be surprisingly addictive to eyeball Google's map and try to beat your current high and low distortions. Here's a few I calculated with no claim that this is particularly representative: 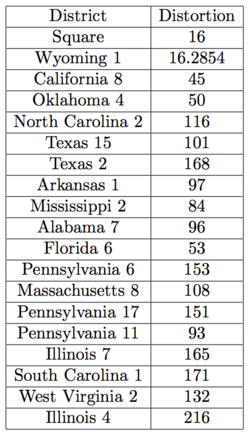 Remember, the square is our gold standard and it has distortion 16. Wyoming 1 is a close second, which is no surprise since it's pretty darn close to being a square itself. In fact, I didn't round it off just so that you could see that it's not actually square. For the rest I rounded for reasons we'll discuss in a moment. Based on my unscientific sample, it looks like a distortion of less than 150 or so is pretty common. Illinois 4 suspiciously stands out at 216, though.

Before we beat up on Illinois 4 too much, we should acknowledge that distortion has some flaws. The biggest, of course, is that drawing Congressional districts is about people, not geometry. It's about the principle of One Person, One Vote. The endless legal wrangles are over whether or not you should count the number of people, the number of citizens, or the number of voters; if you should take race into account; if political affinities should play a role, etc. [4]

These sorts of thorny questions are why the Supreme Court Justices get the big bucks. It is true that you could define a more sophisticated notion of distortion which takes these factors into account, but just because it's math doesn't make it value neutral. By deciding what counts and how to weigh it, you are deciding the outcome.

Deep societal questions aside, distortion leads to equally deep mathematical questions. I mentioned above that I rounded off the distortions of the Congressional Districts. The boring reason is that there is surely some error in the Google data. If the lengths and areas are off by a few miles one way or the other, it makes no sense to worry about the 4th decimal place in the result.

The much more interesting reason is in the devilishly subtle question: “How long is the perimeter of Arkansas's 4th District?” The right side of Arkansas 4 is the Mississippi River. If I were to measure with a mile long measuring stick, I would miss many of the smaller bends and turns. If I used a yardstick, I would do much better but would still miss various small eddies and dips in the riverbank. Even at a nanometer I'd be missing the ins and outs of the atoms which make up the shoreline of Ol' Man River.

It gets better! On of the earliest examples of a fractal is from the turn of the previous century and is called Koch's Snowflake. Imagine you start with an equilateral triangle where each side has length one. Now bump out the middle third of each side with an equilateral triangle which is one-third the size of the original triangle. Now each of the sides of this shape has length exactly one-third. On each of these sides you can bump out the middle third and add a proportionally smaller equilateral triangle. Each side of the shape will now have length exactly one-ninth. Keep doing this forever and the result is Koch's Snowflake. While the process continues forever, any given spot stops changing after finitely many steps and we can ask about the distortion of the Snowflake.

How about the perimeter? Well, we can play the same game and sum up the extra perimeter we add at each step. Once again we get an infinite sum. When we try to work it out, disaster strikes! As we include more and more edges, the sum of their lengths grows larger and larger without bound. Specifically, at every step the perimeter of the Snowflake grows by 1/3 and if you add enough 1/3's, you can get as large a number as you like. The perimeter of Koch's Snowflake is infinite!

[1] While writing this I discovered that distortion already has a name: it is essentially the isoperimetric quotient. I may be partial, but I prefer the more evocative distortion. The isoperimetric problem is the question of proving that the circle has the largest possible area among all shapes of the same perimeter. Even though it was “known” to the ancient Greeks, it wasn't until the 19th century that it was finally proven beyond doubt.

[2] But covering shapes with circles does lead to the beautiful mathematics of circle packings. That will have to be for another time.

[4] While I lived in Athens, Georgia, the liberal college town was moved from one district to another to cut the knees out from under the local Democratic incumbent.

[5] See the Coastline Paradox on Wikipedia.