Popular media loves nothing better than leaning on a tired trope when telling a tale. Mathematicians are always solitary geniuses who toil away in solitude on really hard problems. When they solve one nobody can quite say why anyone should have cared in the first place. But never mind that, it was really hard and it's all very impressive that they solved it all by their lonesome with their otherworldly brain. And they'd better be peculiar! Only Sheldon Coopers need apply. 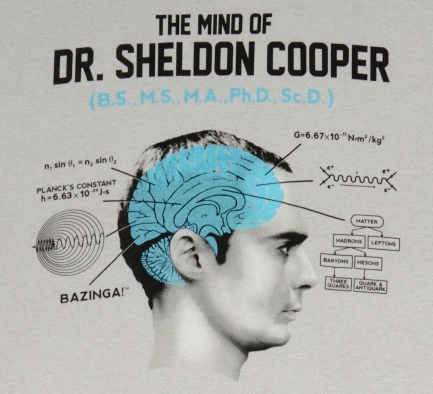 The truth is much more interesting. Of course breakthroughs are sometimes made by the hard work of single individuals (such as Grigori Perelman's proof of the Poincaré conjecture or Andrew Wiles's proof of Fermat's Last Theorem). But much more often mathematics is a social, human enterprise. For me, at least, half the fun of it is in the give and take of sharing ideas with others. Ninety percent of my research papers are cowritten. Others may prefer to work alone, but even then they build on the work of others and hope others will read, appreciate, and use their work.

Heck, even the famously reclusive Perelman built his house on the foundation of using Ricci flow to study geometric objects provided by Richard Hamilton. And while Wiles worked in his attic office in complete secrecy for six years, he, too, depended on others. It was Berkeley number theorist (and oenophile) Ken Ribet who proved that Fermat's Last Theorem would follow from the Taniyama–Shimura conjecture about certain elliptic curves (those strange number systems we ran across last year). And when Wiles's proof of the Taniyama–Shimura conjecture looked to have a fatal flaw, it was in collaboration with Richard Taylor that a fix was finally found.

The collaborative and social nature of mathematics is exemplified by Paul Erdős. We crossed his path here at 3QD nearly two years ago. A mathematical vagabond, Erdős was famous for living out of a single suitcase. He traveled the world visiting math friends for a few days or weeks, doing math with anyone who was up for it. 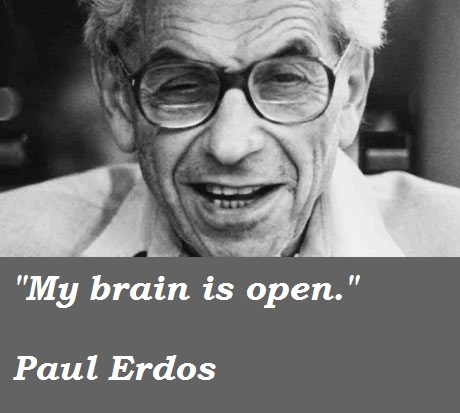 In Erdős's case “peculiar” fit like a glove. He had all sorts of idiosyncrasies. For one he spent much of his life using amphetamines to help him work. His close friend Ron Graham once bet him $500 that he couldn't stop taking them for an entire month. Erdős won the bet but complained afterwords that Graham had set mathematics back by a month! Talking about that month Erdős said, “Before, when I looked at a piece of blank paper my mind was filled with ideas. Now all I see is a blank piece of paper.”

I recommend the biography “The Man Who Loved Only Numbers” by Paul Hoffman if you'd like an entertaining look into the life of a true one of a kind. I had the good fortune to meet Erdős the year before he died. I was studying in the Budapest Semesters in Mathematics program at the time and Erdős stopped by to give a talk and visit with the students. Most world famous mathematicians wouldn't be able to find the time to talk to a bunch of undergraduates, but Erdős never passed up the opportunity to talk math with anyone who'd listen.

There will surely never be another Paul Erdős. But in the Age of the Internet we no longer need mathematicians to travel from village to village. Perhaps the twenty-first century heir of Erdős is D. H. J. Polymath. This is the pseudonym of a loose collective of mathematicians who work in a massive, open, online collaboration on research problems.

In 2009 Tim Gowers proposed on his blog that anyone interested should jump in and work together to provide a purely combinatorial proof of the Hales-Jewett Theorem. Amateurs and professionals alike joined in and the project was a spectacular success. In a short seven weeks they had the proof they were looking for and the results eventually appeared (under the pseudonym) in the Annals of Mathematics, the premier research journal in mathematics. Since then a number of other Polymath projects have occurred, some of which have also led to research papers. In fact, just a few weeks ago on Mathoverflow [3] Gil Kalai asked people to suggest problems that the Polymath Project could tackle in the future.

There was a great deal of good fortune in the first Polymath Project. The mathematics of the Hales-Jewett Theorem naturally lent itself to contributions from a wide variety of people (no doubt thanks to Gowers's foresight). And the novelty of the project drew in several of the preeminent mathematicians, including Gowers, Kalai, and Terry Tao.

Polymath Project 5 was the Erdős discrepancy problem. Erdős was well known for posing problems. Ernst Strauss described Erdős as “the prince of problem solvers and the absolute monarch of problem posers”. Erdős's problems are notorious for being elementary to state and seemingly superficial in substance, but actually devilishly hard and requiring deep new understanding to solve. Famously, Erdős would offer cash prizes for solutions to problems he found particularly interesting. He might offer $20 for a problem he thought was doable and a few thousand for one he thought was completely out of reach of current mathematics. Erdős liked to joke that his prizes surely violated minimum wage laws.

In the case of the Erdős discrepancy problem, the question has been open since the 1930s. Paul Erdős offered $500 for its solution. Like many of Erdős's problems, it's not too hard to state:

Erdős asked, “if I give you any fixed number C (for example, C could be 500), in response can you give me a two numbers, k and n, so that if I add up the first n numbers I get by taking every kth number in the sequence I must get a number larger than C?” Here by larger we mean that we disregard the sign of our sum when we compare it to C (that is, we take the absolute value of the sum).

Erdős, though, had in mind an arbitrary sequence which may follow no pattern at all. For example, we could take the digits of pi [4]:

Since pi goes on forever I could make a list of 1's and -1's by disregarding the first 3, and then making my list by taking a 1 for each even digit and a -1 for each odd digit:

Since pi is irrational, we know this list goes on forever and probably has no pattern [5]. Nevertheless, the Erdős discrepancy problem says that even if you pick C to be your favorite Brobdinagian Number, I can respond with a k and an n which will extract out a sum which exceeds your number, no matter how gigantic it may be.

The Polymath Project made limited progress on the Erdős discrepancy problem. To give you an idea of how hard the problem seemed to be, last year Alexei Lisitsa and Boris Konev used a massive computer search to verify that the conjecture is always true if you take C to be 2. That's right, 2!

Remarkably, last month Terry Tao announced on his blog that he can prove that the Erdős discrepancy problem is in fact true. If I take my list I made using pi and take C to be, say, the number of particles in the known universe, there must be a k and n so that when I extract out the every kth number in my list and add up the first n of them, I get something even larger!

Terry Tao is one of those stereotype busting mathematicians who collaborates with lots of people. In this case the result is his own, but he was one of the people who worked on the Erdős discrepancy problem for the Polymath Project. His proof depends on the work of the Polymath Collective as well as some new results in number theory.

Somewhere Paul Erdős is smiling and glad he took the time to talk math with a young Terry Tao: [2] Mine is four, by the way. Which sounds impressive until you read on wikipedia that of the 137,000 mathematicians who have an Erdős number, the median is five.

[3] A question and answer website for research mathematics. See here.

[4] “Man you gotta understand…there was pie.”

[5] We don't know all the digits of pi, and much remains mysterious about them. For example, data suggests that each digit occurs 1/10 of the time, but nobody knows how to prove (or disprove!) it.

[6] The title is taken from here. If you can have a sleuth of bears, a kine of cows, and a mob of emus, then surely a group of mathematicians deserves to be named (if only so that we can warn each other that they are headed our way :-)).