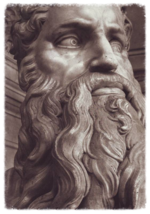 Spring is the Season of Our Liberation

Great epic struggles play out, layered one on top of another, in recent weeks, in past centuries and in ancient times. The state's attorney for Baltimore City, Marilyn J. Mosby, filed the charges against six ‘rough riding' police officers on a range of crimes including murder in the arrest and fatal injury of Freddie Gray. This came shortly after we marked 150 years since the assassination of Abraham Lincoln, who, in his words and in his deeds, freed the slaves from their bondage, and freed the Constitution of the United States from the shackles of an intolerable contradiction. We marked Lincoln's assassination just after Passover, the holiday celebrating the emancipation of slaves from ancient Egypt. It is a story as universal in its meaning to all human beings as it is particular to the Hebrews.

Imagine each of the events depicted in one huge mural, or described in the imagery of one poem, or sung simultaneously by multiple voices from throughout history, each singing a different song of memory, all of them somehow fitting together in one choir. One melody and another, and another, the three of them sung together in polyphonic harmony. The deep meaning of each of these stories resonates more strongly as they resonate together. The Epic of Moses continues when we tell the story of the exodus, as it does when we raise our voices about injustice at any time.

These are not isolated instances. In a very real sense, it is all one story with a recurring theme. Moses could have read out the Emancipation Proclamation; Lincoln could have read the inditement against police brutality and manslaughter; Mosby is still telling Pharaoh that he must free the salves or suffer the consequences. The melody is repeated, each time by a different voice, casting the same message in a new light.

In an interesting twist of history, many Jews add the song Go Down Moses to the Passover Seder. Young children are surprised to learn that this spiritual made its way to the Passover table on the Underground Railroad, where it was sung by African-American slaves. Our voices reverberate together on an epic journey.

We may not pay attention to the overlaid melodies of our multiple story lines very often, but it is the way we experience the world, in all its harmony and all its dissonance. While the essential complexity of it all may at times be lost in the chaotic shuffle of busy days, our lives and our literatures reflect this phenomenon.

Ancient sages said of the Torah, “Turn it and turn it; everything is in it.” As I turn the scroll and turn it again, turn the story over and turn it inside out, I have slowly come to understand how the structure of the text is composed of three main interwoven strands: the stories, the morals of the stories and the abstract concepts embedded in trials and tribulations, the rising and the falling, the honor and the failings of the legendary characters.

The story is never really as simple as it may seem. The exodus contains a passage known as the Song of the Sea, reminding us not to revel in the death of our enemies, for they too are human beings. Lincoln bore the weight of each soldier who was killed and the sorrow of each survivor in the war he waged, from the North and from the South. He knew that reconstruction would depend upon good people from both sides learning to overcome their differences. Just yesterday we heard of the passing of another New York Police officer, Brian Moore, who died from his wounds, after he was brutally shot in the line of duty.

A bar from J.S. Bach's “Fugue No.17 in A flat”, The Well-Tempered Clavier (Part I),a famous example of contrapuntal polyphony.

There are good people on both sides of most conflicts, and there are usually more than two sides. When we reduce complex scenarios down to good vs. evil, we do so at our own risk. If any of our lives matter, then all of our lives matter. There may or may not be a creator concerned with the matters of our lives; on that we will have to agree to disagree in good faith if we are to live together, but there is surely a great harmony in the universe when we raise our voices together in song. True, there are fight songs, victory marches, and songs that glorify violence, but it's really hard to shoot while you're singing in three part harmony.