A question related to Zeno's famous paradoxes is the following: “Is it possible to complete an infinite sequence of tasks in a finite amount of times?” There seems to be something odd about supposing that an infinite amount of tasks, per definition without last task, should have been completed.

In a beautiful article, Max Black[i] argued that supertasks are logically impossible. Very eloquently, he attempts to show that to think otherwise leads to a contradiction. The first step in his argument is to suggest that if it is possible that one infinity machine exists, then it is possible that two exist. An infinity machine, simply, is a machine able to finish an infinite sequence of tasks in a finite amount of time. He continues to demonstrate that if two infinity machines should be set up to work against each other, it is impossible that both should finish their task.

Suppose we have an infinity machine, Beta. Beta is a feat of engineering, or rather, a feat of imagination. Beta is beyond the limits imposed by physics, engineering or any other subject that pays taxes to the real world. Beta is a subject of what is conceivable. There seems to be no problem involved in thinking that such a machine should exist, let us claim. Now, Beta is put between two bowls, one containing a marble, the other empty. Beta's task is to take the marble and move it from the one (right, say) bowl into the other (left). After Beta has done so, it rests for a little while. Now, take a different infinity machine, Gamma, whose task is to transfers the marble back (from left to right) whenever Beta is resting. Of course, this is an infinite task. Suppose, however, that Beta & Gamma are working ever faster. For the first ball, Beta takes half a minute to move it, then rests for half a minute. In the meantime, Gamma starts to work, taking half a minute, then resting for half a minute. For the second ball, Beta takes a quarter of a minute to move it, then rests for a quarter of a minute. For the third ball, Beta takes an eighth of a minute to move it, then rests for an eighth of a minute. For the fourth ball, you get the idea…

Now, for Beta, both the total time of moving balls and resting are, respectively, geometric series. These series sum to a finite number. Indeed, in this case we have:

for each. There is a beautiful proof without words for this in Fig. 1. Just suppose that the length of one side of the square is 1. So in total we have:

After two minutes, Beta stops, having moved every one of an infinite number of balls, provided that what Beta is doing can indeed be modelled with a geometric series. But likewise for Gamma. After two minutes of moving marbles, in the later seconds an absolute frenzy, both machines stop, having completed an infinite amount of tasks. The question now is: where is the marble? It cannot be in the right bowl, because every time it was put there, Gamma returned it to the initial bowl. It cannot be in the left bowl, because every time it was put there, Beta returned it. But it cannot be anywhere else either. Now, it should be possible for two infinity machines to exist if one can exist. Yet, the existence of two infinity machines leads to a contradiction. Hence, infinity machines are impossible, proof by contradiction. 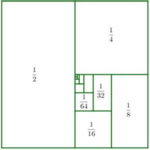 Perhaps Thomson's lamp[ii] is the most famous infinity machine, as it is indeed simpler than Black's. Suppose you have standard writing desk lamp with a button to press that will turn it on, if the lamp was off, and off if it was on. Now, suppose again that physical laws have been suspended. Suppose further that you start with the lamp off, take half a minute to press the button and then wait for half a minute. You see where this is going. After two minutes, you will have pressed the button an infinite amount of times. Is the lamp switched on? No, because for every time you switched it on, you switched it off again. It can't be off either, because the same reasoning applies. Thus, it is nonsense to suppose that an infinite amount of tasks could be executed in a finite amount of time.

The arguments put forward by Black and Thomson are certainly fascinating. They are simple and beautiful, to the point where it is easy to be convinced. Yet, it has been pointed out by Benacerraf[iii] that as they stand, they are not valid. The mistake that is involved in both is the following. They specify a sequence of actions (transferring the marble, flipping the switch) starting at t0 and increasing in speed to such an extent that an infinitely many actions have been completed by t1. But now, Thomson and Black ask, what is the state of the machine at t1? It must be either on or off, or the marble must be either in bowl A or B. But it cannot be either, for every time it was there, another action undid it. However, Benacerraf points out, this is only true for any instant before t1. We have no idea what it is at t1.

This is not because of some contradiction involved in the notion of supertasks, but rather because the setup of the infinity machines has not specified what is the case at t1­. Both Thomson and Black described what the machines are doing up until t1, but neither mentioned what would happen at t1. Of course, the lamp is either on or off and the marble is either in A or B. Yet, our inability to tell which one it is, is not a contradiction. We cannot tell because it has not been specified. Indeed, both outcomes are perfectly consistent with the setup of the machines. The argument underlying Thomson's lamp is put thus by Benacerraf:

Benacerraf continues: “But if we now continue the argument with ‘But it must entail one or the other', we are struck with the obvious falsity of the remark; whereas the continuation ‘But the lamp must be either on or off', is striking by its obvious irrelevance.” The point then is this: the lamp (or marble for that matter) could be either because neither of the outcomes is entailed by the description of the task. But this is not the contradiction Thomson and Black hoped it would be.

So the subscript (i,j) denotes the i­throw and the jth digit.