Some myths seep so deep into popular culture, that even those who are not aware of the origins of a legend, know the story. Few of us have read Ovid's original account of the Cypriot sculptor, Pygmalion, who carved a beautiful woman out of ivory, and proceeded to fall so deeply in love with Galatea, as he called her, that the goddess Aphrodite took pity on him and breathed life into the statue. But, even in our ignorance of Greek classics, the basic motifs of this story are familiar from countless retellings through the ages. Whether it is a fairy tale like Pinnochio, or – in a more contemporary twist – a play by George Bernard Shaw, the theme remains the same: can you fall so completely in love with your own creation, that you blur the boundaries of reality? Can you make something come alive, just by wanting it badly enough?

After a two year pause, the LHC is turning on again. Once more, beams of protons will run circles around the giant ring, miles under Geneva, speeding up with each lap, until they are made to collide head-on, unleashing energies to rival those that prevailed seconds after the Big Bang. In the earlier run, when the Higgs boson was discovered, the LHC attained collision energies in the 7 – 8 TeV range. This time, the goal is to reach the 13 – 14 TeV range, and explore realms that have never before been accessible. Couched within the excitement of probing the unknown, are our desires for what we want to see emerge from the data. There are several theories we would like to see proved, but if I had to choose a single contender, I'd vote for supersymmetry (SUSY; pronounced Susie) – as would many others. There are, of course some dissenting voices in the crowd; those who say we have already hung on to the hope of supersymmetry for too long, that some experimental evidence of it should have turned up by now, if the theory was correct. These critics level the allegation that supersymmetry is in fact just a theoretical construction, but that some of us are so enamored of its beauty, and so keen to see this mathematical model ‘come to life', that we have lost touch with reality.

The fact that most physicists do tend to wax lyrical about this theory, is indisputable. “I love supersymmetry. It is a very canonical theory”, says Fabiola Gianotti, the soon to be Director General of CERN. Peter Higgs, after whom the famous boson was named, has declared himself “a fan” and Stephen Hawking, one of the most recognizable icons of our time, says we might see traces of supersymmetry at the LHC, if we're lucky, and that “the discovery of supersymmetric partners for the known particles revolutionize our understanding of the universe.” In short, so many physicists want so desperately to see this theory realized, that one could perhaps be excused for wondering if we are contemporary Pygmalions, and SUSY our Galatea. Are we trying to bring it into being by sheer force of will?

Before you make up your mind on that issue, you need to know what supersymmetry is, and what it does. The stunningly successful Standard Model of Particle Physics tabulates all known subatomic particles, dividing them into two distinct groups, which obey different rules and serve different physical purposes: there are the gauge bosons – particles like the photon, that mediate forces – and the fermions – particles like the electron, that make up matter. The discovery of the long conjectured Higgs Boson “completed” the picture, to great fanfare. As of July 2012, all the fermions and bosons in the Standard Model have been observed, their properties studied, and their masses measured.

But if supersymmetry is true, we are far from done; every known particle is but one of a pair. There is a boson to partner with each fermion, and a fermion to partner with each boson; aside from this one crucial distinction, the two partners are identical to each other in every way and can exchange roles through a supersymmetry transformation. And just like that, a wall we had thought impenetrable, breaks down. If bosons and fermions can transform into each other, the distinction between matter and force carriers is no longer fundamental. This is akin to the realization that the x and y axes are not intrinsically different, and their roles can be ‘exchanged', through rotation by a right angle. A supersymmetry transformation is like a rotation in an abstract space, called superspace.

However – and here's the catch – none of the known particles are superpartners of each other. In short, an entire Standard Model worth of new particles lies out there, waiting to be found. Why haven't we stumbled across them yet? The answer lies in the fact that the universe is not supersymmetric any more. There was a time when supersymmetry reigned and bosons and fermions could transform into each other, but that is no longer the case. As the universe evolved, it made asymmetric choices, and supersymmetry was broken, leading to wildly different masses for the particles and antiparticles. 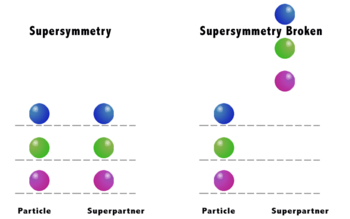 In the figure above, if the particles in a pair are not constrained to be reflections of each other, they are free to have very different masses.

If this sounds a little far fetched, consider that the Standard Model (which has actually been verified) is based on a similar argument. We know that, in the early universe, electromagnetism and the weak force were different facets of a single larger entity – the electroweak force. This configuration was as unstable as a marble balanced perfectly on top of a sombrero. While the marble remained poised in the center, all directions around it were equal(ly symmetric), but as was inevitable, eventually the marble rolled down, breaking the rotational symmetry of the picture by ‘choosing' a direction to fall in. And so it happened with the universe. It fell into a new asymmetric state, where the force carriers of the electroweak force developed different masses and thus appeared to mediate two different forces – electromagnetism, and the weak force.

The mathematical details of supersymmetry are slightly different, but the basic idea carries over: the breaking of symmetry causes paired particles to develop different masses. The claim is that superpartners are not visible in the world around us, because the mechanism of supersymmetry breaking rendered them so heavy, they are unable to exist at everyday energy scales. The good news is that, unless we are completely wrong about when supersymmetry was broken, the lightest superpartners (at least) should begin to materialize at the energies that will now be probed by the LHC.

At this point, all I have really said is that supersymmetry breaks down the conceptual wall between fermions and bosons, and I have hinted at its intense mathematical beauty, without attempting to transcribe that into words. Having gone along with me thus far, you are well within your rights to ask if supersymmetry actually enables us to do anything? Yes, it does.

Supersymmetry resolves a host of outstanding questions – for instance, the hierarchy problem. As things stand, the masses of the Standard Model particles are completely unexplained, and – as a corollary – the relative strengths of the fundamental forces are equally mysterious. We have measured these quantities, so we know what they are, but there is nothing in the theory which tells us why they must have these values and no other. Given the wide range of known particle masses, and the vast discrepancy in the strength of the four fundamental forces – the weak force, for instance, is a hundred million trillion trillion times stronger than gravity – it is disconcerting to have no way to address this issue, in the existing framework. Should supersymmetry be true, this hierarchy of forces and masses arises naturally and effortlessly.

Supersymmetry appeals to our penchant for simplicity, and reducing apparently diverse entities to a common root, in more ways than one. It enables us to take the next step, beyond electroweak unification, to what is called grand unification – the merging together of the strong, weak and electromagnetic forces. And, as a piece de resistance, supersymmetry offers up the possibility of explaining dark matter – which we now know accounts for about eighty per cent of the matter in the universe. This invisible presence, so pervasive and yet so elusive, is not made up of any subatomic particle we are familiar with. Superpartners, on the other hand, are possible contenders for the title, and if this turns out to be the case, we might just solve two major problems in one go.

Despite all the resolutions it may lead to, the fact remains that proof for supersymmetry has not yet been seen, and there are those who argue against running huge, expensive, experiments for what might well be a wild goose chase. They criticize the rest of us, for being blinded by the love for our mathematical creation, and the elegance with which it promises to solves our problems. We are no better than Pygmalion, they claim, waiting around for life to be breathed into a statue.

That comment can be upsetting, unless you know the actual Greek myth. In the version penned by Ovid, Pygmalion wished at Aphrodite's altar for a bride who would be “the living likeness of my ivory girl”. In other words, a woman who already existed out there, whom he had never seen, but yet had managed to capture an image of. Knowing that, I am happy to claim the role of Pygmalion for us physicists; what could be better than building a magnificent structure, from a few basic axioms, using only logic and mathematical consistency, and then finding that – millennia before you were born – Nature had the exact same idea?